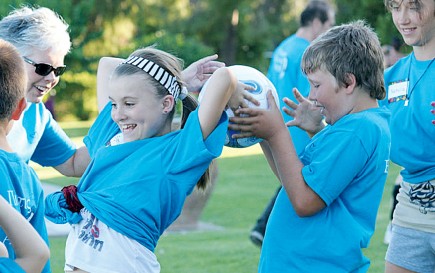 Around the world, December 2011

Erik Tryggestad
Ten nationalities retreat to ancient Corinth for fellowship and fun
Members of the Omonia Church of Christ, a multicultural, metropolitan congregation in Greece’s busy capital, traveled to North Peloponnese, near the site of the ancient, biblical city of Corinth, for fellowship and fun.
Participants represented 10 countries — Albania, Bulgaria, Ghana, Greece, Nigeria, the Philippines, Romania, Russia, Ukraine and the U.S., organizers said. Church members from Tennessee, Texas and California spoke during the event. To help the participants understand each other, organizers used a mobile translating set, purchased with funds donated by the Smyrna Church of Christ in Tennessee.
CANADA
BAIE-SAINT-PAUL — Bren and Cheryl White of Operation French World, a ministry of the Laurel Church of Christ in Maryland, traveled to this city on the north shore of the St. Lawrence River in Quebec recently. The couple, joined by evangelist Jean Grenier, made 13 new contacts for Bible studies and follow-up work.
The ministry “needs French-speakers to go to this special place to help with the starting of a New Testament church,” Bren White said. For more information, see www.ofwmissions.com.
CROATIA ZAGREB — Joy Crouch, a church member in Abilene, Texas, who travels the globe doing mission work, visited this Central European nation recently and took a shipment of blankets — handmade by Christian women — to a children’s hospital.
“This hospital is in bad need of everything, including pajamas for children,” minister Mladen Jovanovic said. “Most of them spend months in the hospital, and they and their parents are very appreciative for the help received in the name of Jesus.”
GAMBIA SEREKUNDA — London Corner is somewhat removed from the United Kingdom. It’s in the tiny West African nation of Gambia, to be exact.
Despite living in a country that’s about 90 percent Muslim, the Church of Christ in London Corner — a neighborhood of Gambia’s biggest city, Serekunda — is growing and has about 70 members, missionary Isaac Daye said.
Recently, the congregation baptized a former Muslim named Rashid.
“Rashid said he has been reading his Bible for many years, seeking the truth,” Daye said, “and he is thankful at last to discover it and become a member of the Church of Christ.”
INDIA CHENNAI — Graduates of a Bible college in this southeastern Indian metropolis are taking the Gospel to the ends of the earth, said administrator Paul Renganathan. The college has 74 students enrolled, and nearly all of the college’s graduates become ministers, Renganathan said.
A past graduate, Satish Kumar, visited Chennai recently and updated his fellow Christians on his ministry in Coffs Harbour, Australia, Renganathan said.
LITHUANIA VILNIUS — The Church of Christ in this nation on the Baltic Sea hosted a strategic meeting of bishops recently.
Kings and queens were there too, as were knights, rooks and pawns.
Church members organized a chess tournament for members and visitors. Competitors matched wits for five hours, minister Ilja Amosov said.
“It was nice to see two people who do not attend the church but came to the tournament,” the minister said.
ROMANIA PITESTI — Forty students completed the 11th annual Pitesti Bible Training School. The Midway Church of Christ in Jasper, Ala., launched the program 11 years ago to “build faith and knowledge” among young Christians in Romania, missionary Harvey Starling said.
“Students receive no personal support for attending the 60 classroom hours of Bible instruction during the two weeks,” Starling said, “but U.S. churches do provide funds for transportation, meals, study materials and lodging.”
Last year, Starling, who has served in Romania for two decades, turned over direction of the program to Romanian preacher John Fratostiteanu.