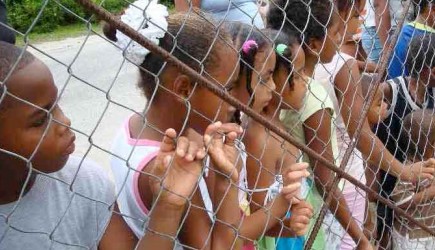 Around the World, December 2010

Erik Tryggestad
Serving souls — and soles — in Panama
In the rural village of Farallon, Panama, a group of church members, including Mark and Miriam Upton and David and Lisa Carter, gave out more than 200 pairs of flip-flops. The footwear was left over from hundreds of pairs brought by members of the Southwest Church of Christ in Jonesboro, Ark., as part of a mission trip to Panama during the summer.
“Giving away flip-flops was an incredible way of getting to know the community and letting them know of our love for them and Christ,” Miriam Upton said.
ALBANIA DURRES — Church members helped distribute medical supplies to hospitals in northwestern Albania, where severe flooding drove more than 4,000 people from their homes earlier this year.
An Albanian-American community in Dallas saw TV reports of the flooding and spearheaded the relief effort. They used Global Samaritan Resources, a church-supported ministry in Abilene, Texas, to ship a 40-foot container of medical supplies to Albania. Lodovik Tetaj traveled from America to Albania to help with logistics. Tom Bonner, a missionary in Lushnja, Albania, supervised the arrival of the supplies. Alfred Zike, a missionary in Durres, Albania, assisted.
ARGENTINA BUENOS AIRES — Let’s Start Talking is an important outreach of the Caballito Church of Christ in this South American capital, missionary Joel Banks said. The Texas-based ministry sends teachers around the globe, helping non-native speakers improve their English skills using the Bible.
“Before the year is out, Lord willing, we will have had 24 short-term workers come and help us with this program,” Banks said.
The Harpeth Hills Church of Christ in Brentwood, Tenn., provides housing for the workers in Argentina.
“How to continue working with all the contacts made through this ministry has proved challenging,” Banks said. The Caballito church hosts two Bible studies for people conversant in English and some one-on-one studies. Church member Osvaldo Valdez teaches a beginning English class, which meets before a youth devotional on Tuesdays.
BRAZIL NITEROI — Christians in North and South America prayed for twin boys Graham and Gibson Gotcher. Church members also filled the Facebook pages of the twins’ parents — Wes and Carrie Gotcher — with messages of support. The Gotchers are part of a mission team in Niteroi. Carrie Gotcher delivered the twins in Brazil at 28 weeks. The boys weighed about two and a half pounds each. Gibson Gotcher had surgery to close a gap between his aorta and the pulmonary artery. “We had around 15 people up at the hospital praying for Gibson during his surgery, and we really felt at peace,” Wes Gotcher said.
SOUTH AFRICA PORT ELIZABETH — After graduating from Southern Africa Bible College in Benoni, William Tengani returned to his hometown of Port Elizabeth and planted a new congregation.
The new church, which meets in Tengani’s home, baptized 16 people in its first eight months of existence and has an average attendance of 32, Tengani said.
“We praise God for opening doors for us to preach his holy word,” Tengani said.
SWITZERLAND ST. GALLEN — In 1995, Rene Voser and fellow members of the Church of Christ in Thun, Switzerland, planted a congregation in St. Gallen, a small city in northeastern Switzerland. Voser’s brother, Ivan, visited the church recently. Four couples and a single woman comprise the church’s membership, said Ivan Voser, minister for the Thun church.
“In the congregation in Thun we continue to ask church members for contributions for St. Gallen every last Sunday of the month,” Ivan Voser said, “because my brother lost a lot of his support from U.S. congregations.”
VANUATU TULWEI — Missionary Eric Brandell traveled to Malekula, the second-largest island in this South Pacific nation, to meet with four young Christians who comprise the island’s Church of Christ. The Christians had constructed a bamboo and thatch structure for a meeting place and were preaching to five to 10 visitors each Sunday, Brandell said. For more information, see www.missionvanuatu.com.