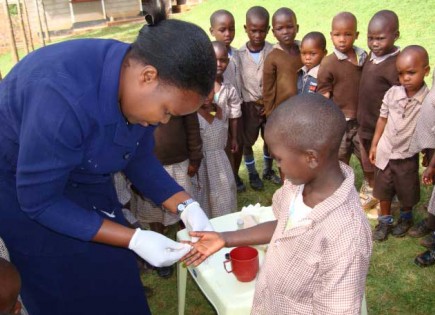 Around the world, December 2009

Staff
Bassy Marube shows a child how to care for a cut — as his friends pay close attention — at Nyamue Christian Junior Academy in Kenya. The first-aid lesson was part of an instructional week on hospitals and medicine at the church-run school. “We are using (the school) as an outreach program in this community,” said Marube’s husband, David, a minister in Kisii, Kenya. “And as a result, we have managed to reach many people with the saving gospel of our Lord Jesus Christ.”
{{MAP}}
AUSTRALIA KURRAJONG — Members of eight Churches of Christ helped a small congregation in Kurrajong, about an hour west of Sydney, during the annual Scarecrow Festival. The church members hosted a free barbecue for the community, during which Dan Bray, a student at the Macquarie School of Biblical Studies, spoke about Jesus. Another student at the school, Satish Samuel, led a Bible class at the church.
{{MAP}}
BRAZIL NITEROI — Nathan Zinck heard shouts of joy from his new neighbors as the world learned that nearby Rio de Janeiro will host the 2016 Olympics.
“So if you’d like to come visit our mission work and go to the Olympics at the same time, you can start making your travel plans,” he wrote in a recent blog post.
Zinck and his wife, Sara, are members of Niteroi Mission, a church-planting team in a city of half a million souls. Other members are Wes and Carrie Gotcher, Zane and April McGee, Brent and Jill Nichols and Ben and Juliana Roberts.
As they complete their first year on the field, team members are studying Portuguese, meeting their neighbors and searching for a meeting place. The team has narrowed its search to four sites.
“We cannot wait to get into the space, prepare it and be able to provide a place for people to come to know Jesus,” Wes Gotcher said. For more information, see www.niteroimission.com.
{{MAP}}
DOMINICAN REPUBLIC NEYBA — Christians are sending “Buenas Nuevas Para Todos” (Good News for All) across their island and across the sea.
Church members launched the radio program, in partnership with Louisiana-based World Radio Gospel Broadcasts, earlier this year. The members’ goal is to present “a good Christian program that motivates and educates the listeners in the way of the Lord,” said minister Francisco Vasquez.
The program is broadcast on local radio and on the Internet. Dominicans working in Spain listen to the program and have thanked the church members for putting it online, Vasquez said.
{{MAP}}
EQUATORIAL GUINEA MALABO — This tiny, Spanish-speaking nation is comprised of a piece of land on the African continent and several islands in the Atlantic Ocean, including Bioko, which contains the capital city of Malabo. Here African Christians including Leonardo Kinson Bueto planted a congregation recently.
The small church is growing, thanks in part to a free radio broadcast, Bueto said. Among those who heard the broadcast were two Nigerian church members living in the capital.
“They didn’t know that the church exists here in Malabo,” Bueto said. “Thanks to this program, these brothers are worshiping God together with us.”
{{MAP}}
GAMBIA
BANJUL — Friday Adima, a minister from Aba, Nigeria, traveled to this West African nation to train instructors who will work in prison ministry. Adima conducted courses for Dallas-based New Life Behavior Ministries, which has branch offices in countries around the globe. Adima also preached for Gambian churches and spoke on conflict prevention and resolution for young couples at the home of minister Isaac Daye.
{{MAP}}
MEXICO MATAMOROS — Mexican border guards detained seven members of the White’s Ferry Road church in West Monroe, La., for nearly 16 hours after they crossed the U.S.-Mexico border near Matamoros.
The church members were transporting medical supplies for mission work in Zacatecas, Mexico. The guards told the church members they would be taxed or fined for the supplies, said Alan Robertson, a minister for the White’s Ferry Road church.
Eventually, the guards allowed the church members to return to Brownsville, Texas. Days later, after paying fines, the guards released the church’s van and trailer, but kept the medical supplies.
“We are still hoping some of the brothers … can get the supplies and get them to the Mexican doctors and on to the poor people they were meant to help,” Robertson said, “but we may never know.”
Meanwhile, six church members who flew to Zacatecas treated 300 patients with supplies bought from Sam’s Club and Wal-Mart and baptized three people during the campaign.