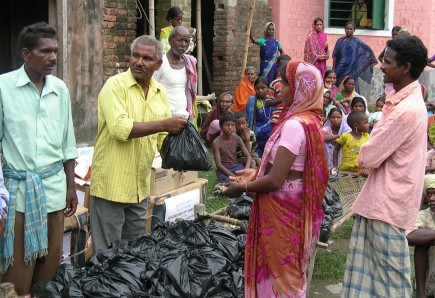 Around the world, December 2008

BAHAMAS ABACO — More than 30 Christian men from three islands in the Bahamas, along with three men from West Palm Beach, Fla., participated in a retreat at the renovated Abaco youth camp, missionary David Caskey said.
“We were all very impressed with the new facilities,” Caskey said, noting that many of the camp’s structures were rebuilt after recent hurricanes.
After the retreat, church members braced for Hurricane Paloma, which struck Central Cuba and was headed for the Bahamas at press time.
“Our prayers and thoughts are with those in the path of this storm,” Caskey said.
BOTSWANA MAHALAPYE — Tendai Nyandoro, a minister in Bulawayo, Zimbabwe, has distributed more than 400 World Bible School correspondence courses in this city in eastern Botswana and surrounding areas. Working with Botswana evangelists, Nyandoro has baptized 13 people in the past year, said Velaphi Mlangeni, director of the World Bible School office in Bulawayo.
“The gospel trumpet is reaching towns and villages in Botswana,” Nyandoro said. “Please pray for the success of this work.”
CAMBODIA TOM NOP TOM — Christians are mourning the loss of Sokha, a Cambodian Christian who cared for 22 children at an orphanage in this village. The 28-year-old was struck by a dump truck and died instantly, said Bill McDonough, director of Partners in Progress.
Sokha also taught English and math to more than 200 children in the village and had nearly the same number in her weekly Bible class, McDonough said.
Survivors include her husband, Kimsom, and three young children. Notes of encouragement for Kimson may be sent to [email protected]
CHILE SANTIAGO — Church members reacted with concern when a team of missionaries presented their plan to transition out of the work in the next six years, team member Jeff Hatcher said.
The missionaries previously had invited 10 church couples on a four-day retreat, where the couples committed to “a year-long process of intense discipleship training,” Hatcher said.
When the team announced its phase-out plans, “we were all encouraged as we saw many of those 10 couples get up to encourage the congregation,” Hatcher said, “and to refute the unfounded fear that the church would be left without proper leadership.”
CROATIA ZAGREB — Croatian Christian Radio, a church-produced program, is reaching listeners across this Central European nation, minister Mladen Jovanovic said. Vlado Psenko oversees the ministry.
Recently a listener from Slavonski Brod, a city near Croatia’s border with Bosnia, requested 22 CDs of the program to distribute to friends.
DEMOCRATIC REP. OF CONGO GOMA — Members of the Goma church are among the estimated 250,000 Congolese who have fled their homes after an outbreak of violence between rebels and government forces in the country’s eastern region, near the Rwandan border.
Evangelist Joseph Juma Mukewa asked for prayers for the congregation.
GHANA TAKORADI —A mission team from the U.S. baptized seven people during its first day of work in this West African nation, team leader Joel Coppinger said.
The seven young adults are students at Outreach Africa Free Vocational School, a church-operated school, said Coppinger, of World Bible School of Tulare County in Visalia, Calif.
The four-member team spent three weeks campaigning in three regions of Ghana, Coppinger said.
LESOTHO MASERU —The church in the capital of this tiny nation, contained entirely within South Africa, hosted a recent church leadership retreat for ministers across the region. Tebogo Ramatsui, minister for the Pretoria, South Africa, church, coordinated the event.
The theme was “Ministry in the 21st century: How to Serve.” One purpose of the retreat was “to provide a loving, personal … interaction between the pioneers of our brotherhood and our younger preachers,” Ramatsui said.
UNITED KINGDOM BRISTOL — Fifty members representing 13 congregations attended the Bristol church’s second Prime Time Weekend recently, evangelist Trevor Williams said. Participants studied Scripture together and visited the historic city of Bath in southwest England.