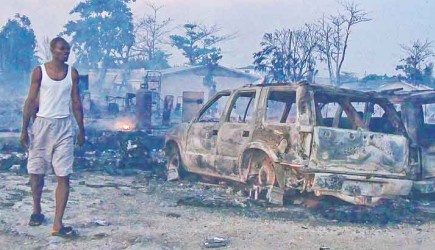 Erik Tryggestad
Church in Bahamas reaches out to suffering Haitian community after fire
A blaze in an impoverished community known as “The Mud” on the Abaco Islands of the Bahamas destroyed at least 15 homes in the shantytown, home to immigrants from Haiti, said Jason Quashie, minister for the Marsh Harbour Church of Christ in Abaco.
About 35 to 50 people attend church services each week, and nearly one-half of them are of Haitian descent, Quashie said. The congregation has provided clothes for the fire victims.
Church members across Abaco also endure shortages of clean water and high fuel prices — more than $6 per gallon — Quashie added. The minister preached a sermon recently on finding joy in suffering.

CHILE SANTIAGO — The story of the Ethiopian eunuch played out at a Chilean gas station recently, missionary Jeff Hatcher said.
Chilean evangelist Claudio Zalaquett met a man named Roberto and “somehow, while filling up, these two started a conversation that went immediately to the spiritual side of life,” Hatcher said.
Roberto told the minister that, “from what he could tell from his own studies, he needed to be baptized,” Hatcher said. “Rather than following the example of Acts 8:36-38, Claudio proposed that they get together and study the Scriptures — just to make sure he knew what he was doing.
“After two months of study, Roberto finally took the opportunity to confess his faith and be baptized into Christ.”
CROATIA SPLIT — Mladen Jovanovic and his wife, Dragica, worshiped with a congregation of Dalmatians — that is, people who live in Dalmatia, a region of southern Croatia thought to be the birthplace of the spotted dog breed. The Jovanovics visited with a Church of Christ in the region’s largest city, Split.
“The worship hall was packed both days of our visit,” Mladen Jovanovic said. “Dragica also met with a group interested in knowing more about teaching children’s Bible classes. The church was full of children, the great hope for the future.”
GHANA ACCRA — A 21-member team from Oklahoma joined students from Heritage Christian College, a ministry training institute in this West African capital, for three days of evangelism.
“It was great (to work with the Americans) as they went from house to house, knocking doors,” said Alfred Beyan, a student at the institute and minister for the minister of G.S.A. Road Church of Christ in Monrovia, Liberia.
The team also sang for a group of women from a Church of Christ in Tema, Ghana.
“The women purchased two acres of land and intend to build a clinic, vocational school and a church,” Beyan said.
INDIA NALGONDA — Prabhu Kumar asked for prayers for this southern Indian town. Kumar works with World English Institute, a ministry that helps students improve their English using the Bible. While inaugurating a branch of the ministry in Nalgonda, Kumar and other Christians were threatened with beatings by a group of Hindus.
“Please pray for these people, so that God may work on their hearts,” Kumar said.
SWITZERLAND ZOFINGEN — About 30 young Christians attended a recent youth retreat, organized by Churches of Christ in the Swiss cities of Bern and Thun. Ivan Voser, a minister in Thun, was the guest speaker.
“I remember the time, when I enjoyed going to the Zofingen retreat as a youth,” Voser said.
THAILAND KHON KAEN — A seminar on Christian families drew 130 people from 20 congregations to the Ban Kum Hai Church of Christ, missionary Kim Voraritskul said. Prateep Witeerungrot, minister for the church and director of the Songkla Bible School, conducted the seminar.
“Brother Prateep’s lessons were full of Thai examples that fit well with our Thai Christian lifestyle,” Voraritskul said.