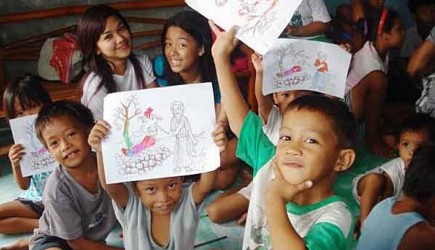 Erik Tryggestad
100 degrees plus no air conditioning equals VBS in the Philippines
Christians sang and sweated as they conducted Vacation Bible Schools for children in rural congregations in the Philippines. Ronnie Cariaga, a church member in Bacoor, Philippines, helped a group of young people conduct a VBS for the Paranaque Church of Christ. Word spread about the event, and churches in the cities of Langkiwa and Piela asked to be a part of the experience.
“So, we brought the same lessons and teachers to these congregations,” Cariaga said. “Without chairs and a place to hold the VBS, amidst the scorching heat of the sun and hot temperature rising to 38 degrees Celsius (100.4 degrees Fahrenheit) with just two electric fans, these kids came day after day to learn new things.”
{{MAP}}
CAMBODIA TANGKOK — Church members are “rebuilding” a congregation in this Southeast Asian village, missionary Bill Singleton said.
Launched in 2003, the Tangkok church reached a regular attendance of 200-plus people, Singleton said. But the church dwindled after it planted another congregation. The church had about 35 in attendance on a recent Sunday, Singleton said. The preacher, Poeu Sokgeah, cares for seven orphans.
“Keeping everyone fed has been a problem,” Singleton said.
“Our concentration on Tangkok has caused us to get behind on baptism requests from other communities,” he added, “and we must play catch-up for a while.”
{{MAP}} CUBA TAGUASCO — Eleven people, including a former voodoo practitioner, were baptized recently in this town in central Cuba, said evangelist Edelto Villa.
The new church is “the fruit not only of many days of evangelism but of many prayers as well,” Villa said.
Villa is one of 34 Cuban evangelists supported by the Gulf Shores, Ala., Church of Christ, with assistance from the White Rock Fund in Texas.
{{MAP}} MEXICO MEXICO CITY — The 70-member Tierra Firme Church of Christ appointed its first elders recently.
About 150 people attended a Celebration Sunday to honor and pray for the new leaders and their wives — Alfredo and Norma Hernandez, Jaime and Joaquina Cabrera and Luis and Luisa Paco. Tom Phillips, an elder of the Palo Verde Church of Christ in Tucson, Ariz., and his wife, Vonnie, attended, as did leaders from other churches in Mexico City.
The Palo Verde church supports missionaries Sean and Jeni McClue, who work with the Tierra Firme church. During the Celebration Sunday, the church had two baptisms — one of them the McClues’ daughter, Sarah.
This summer the McClues plan to return to the U.S. to begin an urban ministry in Phoenix.
{{MAP}}
NIGERIA YOLA — Less than a year after enduring a two-day kidnapping ordeal, Dr. Robert Whittaker is back in Nigeria, treating the sick.
The British-born physician traveled to Yola, a town in northern Nigeria, recently with 10 students from the School of Biblical Studies in Jos. He treated about 200 patients. The students conducted gospel meetings and baptized eight people — more than doubling the size of the town’s Church of Christ, Whittaker reported.
{{MAP}}
PORTUGAL LISBON — The eight members of the Angola mission team have arrived in this European capital and are immersed in intensive Portuguese language classes. The team plans to move to Angola, a Portuguese-speaking country in southern Africa.
In Portugal, “it’s incredible how many people I meet who, if they are not actually Angolan, lived for a significant part of their life in Angola,” said team member Nathan Holland.
For more information, see www.angolateam.org.
{{MAP}} THAILAND BANGKOK — Tensions between anti-government protesters and the Thai military turned violent recently, shortly after a team of U.S. Christians arrived there.
The eight-member team from Lubbock, Texas, traveled to Bangkok for Let’s Start Talking, a ministry that uses the Bible to help non-native speakers improve their English skills. Bangkok missionaries Andy and Kathryn Miller supervised the team.
The team cut its trip short and returned home. The Millers and their three children left Thailand for the U.S. a few days after the team. The Millers plan to return to Thailand in August.
“This problem is not going to go away overnight,” he said, “and the scars will last forever.”