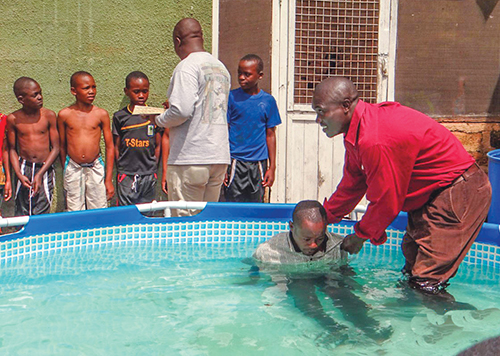 Staff Reports
AUSTRIA
FILZMOOS — About 50 Christian women from across Europe dug into the book of Exodus during a Come Before Winter missionary renewal retreat in this town near Salzburg, Austria.

“Each time I’ve participated in one of these renewals, my spirit has been lifted and renewed by the team that hosts the time together — as well as the other participants,” said Amanda Haskew, who serves on a mission team in Vienna, Austria.
The next Come Before Winter is scheduled for June in the Philippines. See www.comebeforewinter.org.
INDIA
KANDRIKA RAMIDICHERLA — Jugs, jars, pots, buckets and bottles lined the floor of a humble building in this southern Indian village. Their owners wanted to make sure they were among the first to receive clean, safe drinking water.
Church members including Dr. Mani Pagidipalli installed a reverse-osmosis system to purify the village’s water. Some people from the surrounding communities told the Christian physician that they previously had to walk many miles to get drinkable water.
“Please continue to pray for this village as we continue to provide them not just with safe drinking water, but also the ultimate living water,” Pagidipalli said. “This is our goal and purpose.” 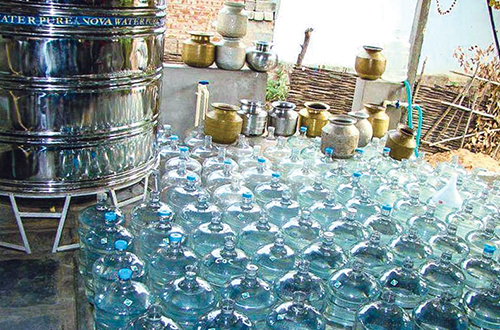 Jars and bottles line the floor near a new water filtration system in southern India. (PHOTO PROVIDED BY MANI PAGIDIPALLI) JAPAN
HACHINOHE — Missionary Joel Osborne and a team of six student from Ibaraki Christian University traveled to this city on Japan’s eastern coast for a Tohoku relief trip — a quarterly effort to help in recovery after the devastating earthquake and tsunami of March 2011.
The team served people in temporary housing, assisted in local ministry efforts and led worship for a church in Hachinohe.
“Through the daily devotionals and meeting with young Christians, the image I had of the Bible, Christians and Christianity was changed,” one of the students said.
MALAWI
LILONGWE — In the U.S., most used, empty pill bottles for prescription medications end up in landfills.
Dick Stephens wants them to go to this southern African nation instead.
“As one of the poorest nations in the world, (Malawi’s) rural hospitals often must dispense medications in a piece of dirty newspaper” — or by just handing it to their patients, said Stephens, whose ministry, the Malawi Project, assists in medical, agricultural and ministry programs.
“When the patient gets home they must find a way to store the medicine,” Stephens said. Often the only place is still within reach of small children, insects or rodents.”
To learn how to prepare and send old pill bottles for the effort, see malawiproject.org/medicine-bottles-for-malawi.
MEXICO
REYNOSA — Children’s ministry at the Balcones Church of Christ, just south of the Texas border, is an increasingly massive undertaking.
The Church of Christ North in Pharr, Texas, which supports mission work and church planting in Reynosa, reports that church attendance at Balcones is in the 200s. At least half of that number is children.
“The ladies of the congregation began meeting every Saturday for study and planning ways to reach the community and train their children,” members of the Pharr congregation wrote in a recent report.
The church recently added  new classrooms, a kitchen and a large fellowship hall to its facility, doubling its size.