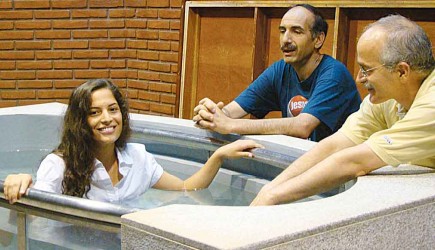 Erik Tryggestad
Church in Argentina baptizes, nurtures and trains
Catalina is one of five youths and young professionals baptized recently at the Caballito Church of Christ in Buenos Aires, Argentina. The church works hard to integrate new members into its small-group ministry, Banks said. “Please keep these spiritual infants in your prayers as the unending challenge of follow-up begins,” he said.
Valdez and other church members are launching the Instituto Biblico de la Iglesia de Cristo en Argentina (Bible Institute of the Church of Christ in Argentina), a ministry training school. “We believe that academic training of leaders is as important as the practical experience of small-group life for the church to grow in strength,” Banks said.
BAHAMAS MARSH HARBOUR — A group of pastors, preachers and bishops on the Abaco Islands invited Jason Quashie, minister for the Marsh Harbour Church of Christ, to speak at a recent gathering. Quashie taught a class on prayer.
“From the talk around town, it went very well,” said Quashie’s wife, Katrinka.
The group has invited the minister to future meetings.
“Pray for this opportunity,” Katrinka Quashie said. “Only God knows why this door was opened.”
LITHUANIA VILNIUS — A team of U.S. church members visited this European capital recently to work with the Church of Christ there.
“The church in Vilnius remains small — around 30 — even though many over the years have been reached by the Gospel,” said Danny Dodd, preaching minister for the Gateway Church of Christ in Pensacola, Fla., and a former missionary to Lithuania.
“Like the rest of the country, the Vilnius church has been adversely affected by the immigration of Lithuanians out of the country, primarily to Western Europe,” Dodd said. “But those there continue to remain faithful.”
SOUTH AFRICA EAST LONDON — Sherman McLaren moved recently to this coastal city of about 400,000 people to serve as minister for the Keam Road Church of Christ. McLaren previously served as a youth minister in Benoni, South Africa.
The church’s goal is to focus on family ministry, “getting God back into the homes,” McLaren said. “Then I believe evangelism will begin to be real — and of essence — to the believers here at Keam Road.”
THAILAND UBON RATCHATHANI — About 20 Thai church leaders took two exams per day and memorized 40 verses from the Gospel of John during a two-week Leaders Bible School, missionary Daniel Hamm said.
The intensive course also involved hands-on evangelism in the local communities.
After the course, Hamm planned to travel to Surin, Thailand, to present a lectureship on church leadership.
“Four congregations in four different provinces have appointed elders and deacons after such lectureships in recent years,” Hamm said.
TONGA NUKU’ALOFA — Josh Conivanua, an evangelist in Fiji, traveled to this South Pacific island on a 12-day trip to work with the Nukua’lofa Church of Christ.
“Josh shared with them, prayed with them and encouraged (them) to stand united,” said the evangelist’s wife, Anna.
UKRAINE KRIVOY ROGK — A Church of Christ meets in this eastern Ukrainian mining city — considered one of the longest cities in Europe because it stretches along an 80-mile vein  of metal ore.
The church’s members “are small in number, but their faith is great,” said Ivan Skoleba, a minister in the western Ukrainian city of Ivano-Frankivsk. Skoleba asked Christians to work with and encourage the Krivoy Rog church, which has no minister.
Skoleba traveled to Krivoy Rog recently to deliver a wheelchair to a disabled man. The wheelchair was donated through Judsonia, Ark.-based Ukraine Missions.
“He was as happy as a child when he saw the wheelchair,” Skoleba said, “and told us that now he knew for sure that God does exist. … We also gave him a Bible and told him about the Church of Christ as found in the New Testament.”