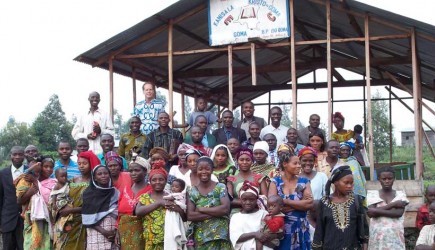 Goma is a city in the eastern part of the Democratic Republic of Congo, close to the massive African nation’s border with Rwanda. In the past decade, the people of the region have endured bloody civil wars and even a volcano eruption. But the Goma Church of Christ, planted in 2002 by Congolese Christian Dunia Kaendo, has experienced steady growth, said Doyle Kee, one of three church members from Switzerland who visited the region recently.
{{MAP}}
FIJI SUVA — Joshua and Anna Conivanua serve a small congregation in this South Pacific capital, but their ministry often takes them across its many islands.
“Most of the time … the work involves traveling to visit other small congregations in the outer islands,” Anna Conivanua said. “Other small Churches of Christ around the region need (spiritual) support … so Josh travels to encourage, strengthen, solve conflicts, solve marriage problems and conduct Bible lessons for those who request.”
The Conivanuas, both graduates of South Pacific Bible College in New Zealand, seek sponsors to help them cover travel expenses. The Pine View Church of Christ in Longview, Texas, helps support their work.
{{MAP}}
GHANA ACCRA — Church members in this West African nation are mourning the death of Victoria Effah, who died Feb. 15 from liver failure. Effah was a houseparent at the Village of Hope, a church-sponsored children’s home outside of Accra.
“Needless to say, the children are heartbroken, especially so since they have lost their birth parents, and now they’ve lost another who loved them dearly,” said Josiah Tilton of Ghana West Africa Missions, which supports Village of Hope.
{{MAP}}
INDIA KUKATPALLY — Edward Rouse, a minister in Hyderabad, spoke at a recent gospel meeting of the Kukatpally Church of Christ, about 30 minutes northwest of Hyderabad. More than 1,000 people attended, including several Indian public officials. Rouse also speaks on a weekly television program viewed in Hyderabad and other parts of India’s Andhra Pradesh state.
{{MAP}}
INDONESIA JAKARTA — Church members in this predominantly Muslim country are feeding 20 children per day through a program called Kids of Indonesia.
“These are children of people so poor that they spend all of their time scavenging in the garbage dumps of the city, looking for anything that can be recycled for money,” said Steve Cate, who coordinates the effort. “Jesus said, ‘The poor you have with you always.’ That is certainly true. They are everywhere, but not many are willing to help with these children in Jakarta.” For more information, see www.steve-cate.com.
{{MAP}}
PAKISTAN SAHIWAL — Church members in the United Kingdom have collected more than 2,100 pounds sterling (about $3,280) to help Pakistani Christians minister to victims of recent violence there.
Naeem Sabir, a minister and principal of Sahiwal Bible College, is using the funds to help victims of “looting, burning and even murder in some villages,” said Barbara Fisher, who oversees the collection. For more information, see www.christian-worker.org.uk or e-mail [email protected]
{{MAP}}
UKRAINE KHARKOV — Brandon and Katie Price, recent graduates of the Sunset School of Missions in Lubbock, Texas, will return to Ukraine, where they served previously, to join a team of Sunset graduates in Kharkov.
“It is Brandon and Katie’s dream to create disciples in Kharkov who will be eager and able to carry on the work long after they are gone,” according to a recent issue of Sunset’s Lifeline magazine.
{{MAP}}
UNITED KINGDOM NORTHAMPTON — In the past year the 69-member church in Northampton, about 70 miles northwest of London, has baptized four people — Erica Kamanga, Audrey Wood, Sarah Hardy and Elaine Raynsford.
“One of these ladies was contacted by reading our Web site,” deacon Richard Sharpe said. Another came into contact with the church through friends.
A third decided to be baptized “by example of her parents” and a fourth “by the example of her daughter and grandchildren,” Sharpe added.