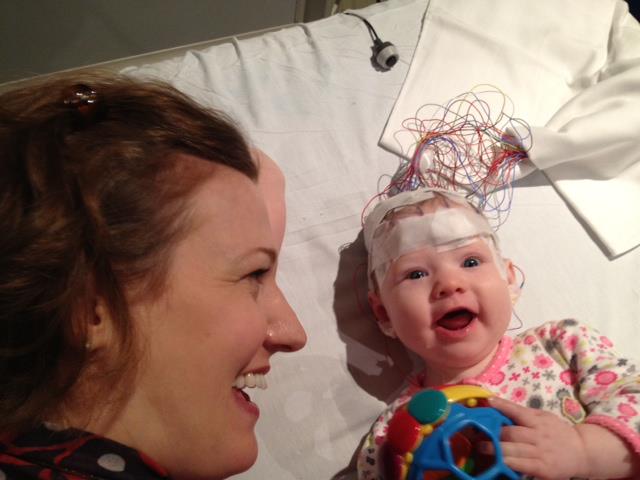 Nathalie McDonald, wife of Arms of Hope President and CEO Kevin McDonald, with their infant daughter Marlie Ruth, who is undergoing treatment for brain cancer. (Photo via Facebook)

Kevin McDonald, president and CEO of Medina, Texas-based Arms of Hope, has resigned effective June 1.
McDonald and his wife, Nathalie, recently moved to Houston to care for their infant daughter Marlie Ruth, who is undergoing treatment for brain cancer, a press release noted.
Arms of Hope is featured in a front-page story in the latest print edition of The Christian Chronicle. A 2010 Chronicle feature highlighted “The Rookie” Jim Morris’ work with the ministry.
The full release on McDonald’s resignation:

MEDINA, TEXAS – With gratitude and appreciation, Arms of Hope’s Board of Directors announces a change in status for our President and Chief Executive Officer, Kevin McDonald. Effective June 1, 2012, McDonald will resign as President and Chief Executive Officer, a position he began in December of 2008. McDonald, with the Board’s support and encouragement, plans to return to his role as a member of Arms of Hope’s Board of Directors, a seat he held for six years prior to being named President and CEO.
Under McDonald’s leadership, Arms of Hope was formed through the consolidation of Medina Children’s Home (est. 1958) and Boles Children’s Home (est. 1924). Since the consolidation, Arms of Hope has added an urban application of its Together Program by opening a Duncanville Campus, and has developed Outreach Ministry efforts in the inner cities of Dallas, Houston and San Antonio. The organization has experienced record growth through the addition of new programs to help socially disadvantaged children in some of the most economically distressed areas across Texas. In addition to the expansion of the services provided by Arms of Hope, McDonald led the organization as it overcame many obstacles and challenges associated with a leadership transition and various organizational transformations.
As many are aware, the McDonald’s have moved to Houston to find the best care for their baby girl who is undergoing treatment for brain cancer. After much prayer and counsel, McDonald reported to the board his belief that it was in the best interest of Arms of Hope and his family that he pass the torch to a new leader. McDonald will be returning to the Houston office of the international law firm of Fulbright & Jaworski L.L.P. as a partner, the firm where he was employed for almost ten years at the beginning of his legal career.
“This has been a very difficult decision because I dearly love serving socially disadvantaged children through Arms of Hope,” states McDonald. “Our family’s significant change in personal circumstances and the fact that the initial goals we set for the organization upon my arrival have been accomplished has required me to take a careful look at the needs of my beautiful family and make an honest assessment of what is best for us.”
“It is remarkable to see the transformation Arms of Hope has experienced under Kevin’s leadership and his talent as CEO will be difficult to replace,” explains Jana Woelfel, Chairperson of the Arms of Hope Board of Directors. “Because of the positive improvement we have seen in the quality of our programs, ministry efforts, personnel and board membership during Kevin’s tenure, we are confident a smooth and seamless transition will occur. The Board is thankful for the contributions Kevin has made and we are pleased that he intends to continue to be involved as a board member.”
Arms of Hope’s Board will immediately begin a search to find a replacement for McDonald and is confident this position will attract highly qualified candidates with a passion for its mission of providing much needed assistance to socially disadvantaged children and families. During this transition, Arms of Hope is blessed with a very capable management team and has asked Troy Robertson, Chief Operations Officer, and Scott Stumbo, Chief Financial Officer, to team together to lead the organization until a new Chief Executive Officer is selected.
ABOUT ARMS OF HOPE:
Arms of Hope is a 501(c)(3) not-for-profit Christian organization that helps change the lives of socially disadvantaged children and families. For additional information about Arms of Hope and its program offerings, please visit ArmsofHope.org.