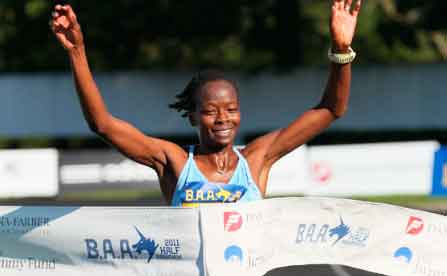 Arkansas — not Kenya — ‘made a runner out of me,’ says Olympic-bound Harding grad

Janet Cherobon-Bawcom qualified for the London Olympics during trials in Eugene, Ore. (Photo via PhotoRun.net)

The Arkansas Democrat-Gazette features Janet Cherobon-Bawcom, a graduate of Harding University in Searcy, Ark., who will compete in the 2012 Olympics in London.

Although she is an Olympic runner, Kenyan-born Janet (Kogo) Cherobon-Bawcom will say that she is not the stereotypical Kenyan runner.
“I know a lot of people think that people from Kenya are born runners, but my coaches at Harding will tell you that it was Arkansas, not Kenya, that made a runner out of me,” the 33-year-old said about her time running track at Harding University in Searcy.
Claiming that she wasn’t very good when she came to Harding in 2002, Cherobon-Bawcom recently qualified for the 2012 London Olympics in the 10,000 meters on June 20 at the U.S. Olympic Trials.
The Harding graduate finished seventh among 24 runners in 32 minutes, 17.06 seconds but became one of three Olympic qualifiers under the U.S. Olympic Committee rules.

Read the full story.
See our earlier post about our coverage plans for the games.