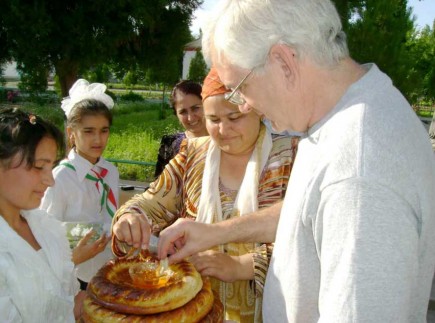 Arkansas minister gets a taste of Tajikistan

staff reports
John Kachelman samples bread and honey presented by children at an orphanage in Tajikistan. The minster for the Judsonia, Ark., church has coordinated seven shipments of clothing, furniture, shoes and other supplies for people in need in the former Soviet, predominantly Muslim nation in Central Asia, north of Afghanistan. The children rehearsed a message for Kachelman in English.
“They spoke of their appreciation for the items collected by the Churches of Christ and for the United States government transporting the items to their country,” the minister said.
While in Tajikistan, Kachelman spoke at a conference hosted by the U.S. State Department. Representatives of Uzbekistan and Kyrgyzstan also attended. The minister and State Department officials also made assessments of future humanitarian needs in the region.