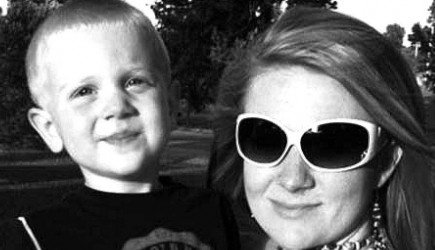 Bobby Ross Jr.
On a recent Wednesday night, Adam and Leslie Jez and their 3-year-old son, Kaden, attended Vacation Bible School at the Foreman Church of Christ, in the southwest corner of Arkansas, just miles from the Oklahoma state line.
That Thursday, they met up with family at Albert Pike Recreation Area, about 70 miles northeast of Foreman.
Before dawn that Friday, Leslie Jez, 23, and Kaden lost their lives when a flash flood swept through their campsite on the edge of the Ouachita National Forest. They were among 20 victims of the June 11 flood, including Leslie’s mother, Sheri Wade, 46.
“Kaden was the sunshine of everybody’s life,” said Billy Blakeney, minister of the Foreman Church of Christ, where funeral services were conducted June 15 for the boy and his mother.
Kaden’s grandmother Dixie Jez is a faithful member of the congregation, as is his father, who survived the flood. Adam Jez, an electrician, grew up at the Foreman church. Leslie Jez, a college student, was not a member but attended services with her family.
“Little Kaden attended our Bible class every Sunday morning with his grandmother,” Blakeney said. “He came out of that class just beaming and singing, ‘Jesus loves me, this I know, for the Bible tells me so.’”
Blakeney described Leslie Jez as a “lovely lady” with a “beautiful personality.” She was active in rodeos, the minister said.