TUCSON, Ariz. — Until a clear, crisp Saturday morning erupted in gunfire outside a Safeway supermarket, few had heard of the Mountain Avenue Church of Christ.

Desert terrain and mountain ranges surround this city of 550,000, about 60 miles north of the Mexican border, where the 120-member congregation meets in a red-brick building shaded by palm trees.

A familiar face only to his friends, relatives and church family, 76-year-old Dorwan Stoddard served Jesus in obscurity — taking charge of maintaining the 50-year-old church building and leading the benevolence ministry with his wife, Mavy.

“He was a hero to his church family,” pulpit minister Mike Nowak said.

But in an instant, he became a hero to millions and propelled the Mountain Avenue church into the national spotlight.

On the morning of Jan. 8, the Christian couple had gone to meet Rep. Gabrielle Giffords at a “Congress on Your Corner” event. When a would-be assassin opened fire as the Stoddards waited in line, Dorwan tried to protect his wife and was hit in the head, witnesses said.

“His final act of selflessness was to dive on top of his wife, sacrificing his life for hers,” President Barack Obama told the nation.

Gifford, a third-term Democrat, was shot point-blank in the head and critically wounded. Besides the congresswoman, 12 others were injured, including Mavy Stoddard. In all, 19 people were shot.

Jared Lee Loughner, 22, described by authorities as a mentally unstable college dropout, is charged in the shootings. The gunman used a semi-automatic pistol.

At a community memorial service that drew thousands to the University of Arizona basketball arena Jan. 12, the president paid tribute to Dorwan Stoddard and the other victims.

“Dorwan and Mavy Stoddard grew up in Tucson together about 70 years ago,” Obama said. “They moved apart and started their own respective families. But after they both were widowed, they found their way back here to — as one of Mavy’s daughters put it — be boyfriend and girlfriend again.

“When they weren’t on the road in their motor home, you could find them just up the road helping folks in the need at the Mountain Avenue Church of Christ,” the president said. “A retired construction worker, Dorwan spent his spare time fixing up the church along with his dog, Tux.”

At the U.S. Capitol, Rep. Brett Guthrie, R-Kentucky, offered his prayers for his wounded colleague Giffords and praised the Christian service of his “brother Dorwan.”

“He loved the Bible,” Guthrie, a member of the Lehman Avenue Church of Christ in Bowling Green, Ky., told fellow House members. “He loved the Scriptures in (their) simplest form and just wanted to internalize them and live them, which is evidenced in his life.”

Stoddard’s last act served as a living demonstration of Ephesians 5:25, the congressman said. That verse reads: “Husbands, love your wives, just as Christ loved the church and gave himself up for her.”

Mavy Stoddard is recovering from gunshot wounds to her legs.

Despite losing her husband, she maintains her spunk and spiritual strength.

“I will survive,” the 75-year-old grieving widow said, seated in a wheelchair as she took the microphone at her husband’s memorial service Jan. 16, eight days after his death. “We will not let that gunman take our hopes.”

As the applause drowned out her words, she said: “So hang in there, everybody. Hang onto your loved ones. Keep kissing them and hugging them, because tomorrow they may not be there.”

The service was moved to Calvary Chapel East, a Tucson church attended by two of Mavy Stoddard’s daughters, to accommodate the hundreds of mourners.

Mavy Stoddard told the crowd that Dorwan Stoddard — her childhood sweetheart whom she married 15 years ago — made her a better, kinder person.

“He loved God, and he loved me, and he spoiled me rotten,” she said.

“Oh, it was fun,” she added. “And the journey will be very, very difficult. But he died for me, and I have to live for him.”
‘THE LIFEBLOOD’ OF THE CONGREGATION

Dorwan Stoddard — “Dory” to friends — knew that eternal life was his.

Three days before his death, he studied the Bible with Ed Biggers, his friend and brother in Christ. During that Wednesday night Bible study, Stoddard talked about fixing up his motor home. He and Mavy wanted to take it to the Pepperdine University Bible Lectures in Malibu, Calif., in May, Biggers said.

“We were studying 1 John,” said Biggers, a Mountain Avenue church elder. “As we ended our discussion, I read 1 John 5:13 and asked, ‘Do you know that you have eternal life?’

Stoddard’s survivors include four sons, four stepdaughters, 21 grandchildren, 20 great-grandchildren — and a church family that considered him and his wife “the lifeblood” of the congregation, youth ministry leader Jessica Knapp said.

“This is going to be a huge hole in our congregation,” Knapp said.

“They were our benevolence committee,” she said. “They did the job fantastically. Instead of just writing checks, they would go meet with people and find out what was going on in their lives and what their needs were.”

In the couple’s benevolence work, Mavy was the stern one who made sure no one took advantage of the church, Mountain Avenue members said. Dorwan was the soft touch ready to give away the property deed.

“They saw to the needs of the sick, hurting, hungry and destitute,” said Nowak, the minister. “They met and talked with individuals in restaurants, grocery stores and banks to see how they could share a little benevolent Jesus with someone.”

Lonnie and Kat Joplin were longtime drug addicts when they came to the church about four years ago.

“We were penniless, hungry, hadn’t eaten for two days,” Kat Joplin said. “We literally had nowhere else to turn.”

The Stoddards fed them and found them a place to stay.

Dorwan and Mavy studied the Bible with the younger couple, helped them beat their meth addiction and even arranged a wedding: Lonnie and Kat had lived together for 15 years but never tied the knot.

“We knew that these were our angels sent from God,” Kat Joplin said. “I can’t even begin to explain just the feeling of acceptance and love from them.”

When the Stoddards traveled, they trusted the Joplins — now active members of the Mountain Avenue church — to watch their house.

That’s why some of the Joplins’ mail still occasionally comes to the Stoddards’ place, and why Dorwan called the couple before going to see Giffords that Saturday morning.

“I’m so glad that both of us got to speak to him that morning,” Kat Joplin said. “But it has been a nightmare. I can’t believe this has happened.”

However, the tragedy has not tried her faith, she said.

“You know, people have been worried about that, and that kind of baffles me,” she said.

In an adult class, members openly discussed their grief as they sought comfort in the Scriptures.

“I’m usually able to separate my personal and my professional life,” said a middle-aged military translator who has served in Afghanistan. “This affected me at home.”

Inside the auditorium, still-fresh scuff marks down a wall identify the exact spot where Stoddard climbed atop a 20-foot ladder a few weeks before the shooting.

The beloved-but-accident-prone maintenance man was working on a projection screen when the ladder slipped.

“It slid down the wall with him riding it down,” Nowak said with a chuckle.

The minister described Stoddard as the kind of guy who sprayed WD-40 on his elbow or shoulder because he believed it relieved the stiffness from countless hours spent repairing the church roof.

Last year, while working on a children’s training area at the back of the auditorium, Stoddard fell through the ceiling. Rather than go to the emergency room, he used paper towels and electric tape to stop the bleeding.

“Dory had a spirit of an 18-year-old but a heart of a 90-year-old. He had 18 stents in his heart and popped nitroglycerin like breath mints,” Nowak said. “We always believed that it would be his bad heart that would bring him down some day.

“When I rushed to the hospital to see Mavy after the shootings, with tears in our eyes, she whispered to me, ‘Dory doesn’t have to worry about another stent.’”

After Stoddard fell through the ceiling, the church named the children’s training area “Dory’s Room” in his honor.

“I kind of nudged him and said, ‘So they named the room after you?’” church member Teresa Nystrom recalled. “And he said, ‘Yeah, that falling through the roof thing was just a stunt.’”

Members said they were not surprised at all that Stoddard put his wife’s life above his own.

But his bravery on that final day did not make him a hero, Nowak stressed in his eulogy.

Rather, the way that Stoddard lived did, the minister said.

“Dory Stoddard didn’t die a hero, he lived a hero,” said Nowak, who described Stoddard as his best friend.

“He completed his heroic act of kindness one final time with his wife, Mavy.” 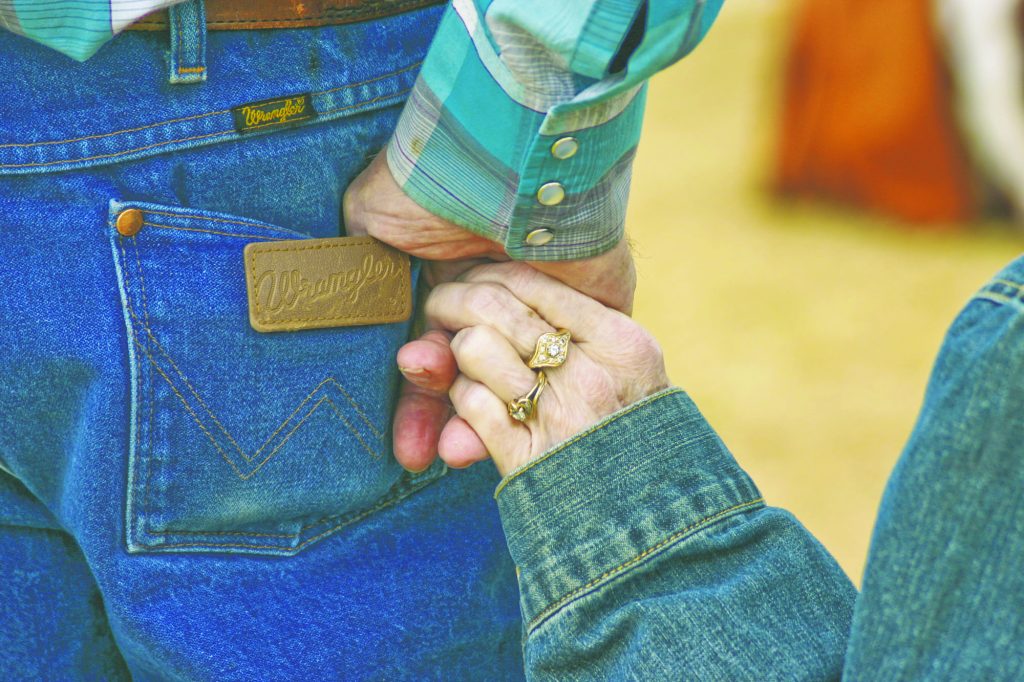 TUCSON, Ariz. — As you turn into the parking lot,…