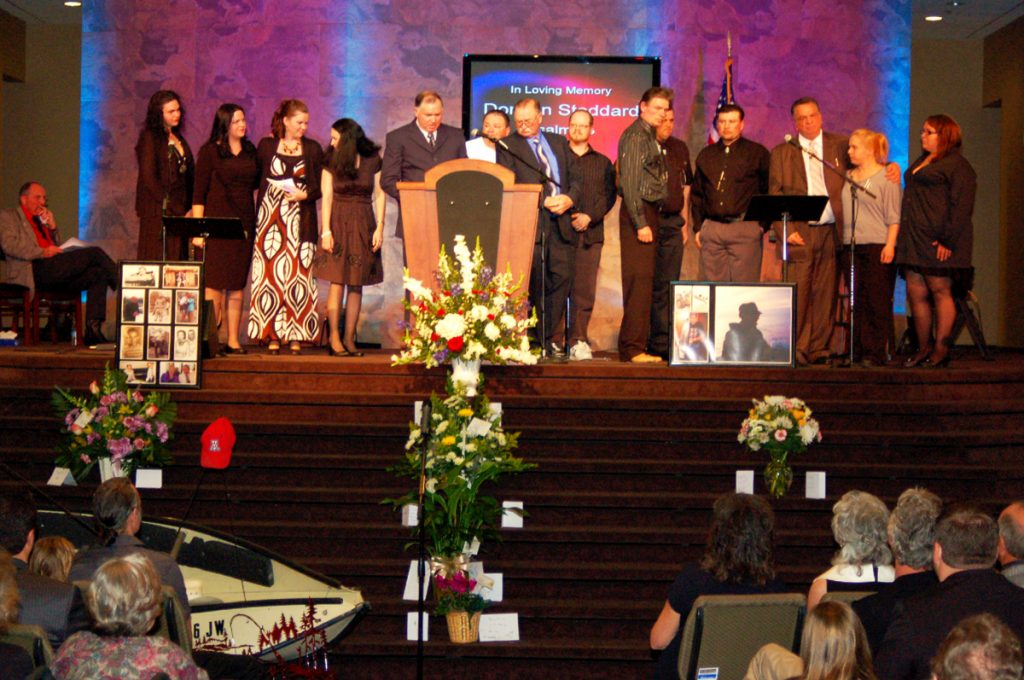 Arizona shooting victim Mavy Stoddard: ‘We will not let that gunman take our hopes’ 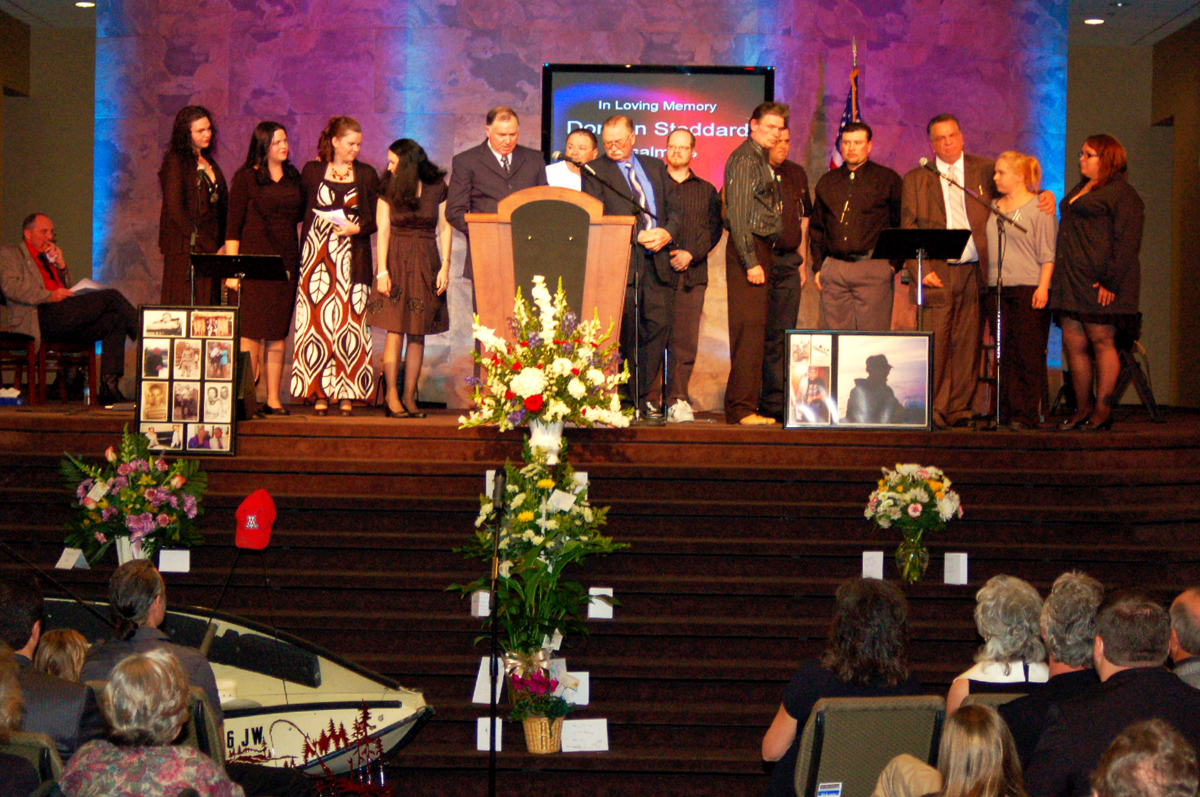 Blogging live from Tucson, Ariz.
Mountain Avenue Church of Christ member Mavanell “Mavy” Stoddard suffered gunshot wounds to her legs and lost her husband, Dorwan, in the Jan. 8 assassination attempt on Rep. Gabrielle.gif?Action=thumbnail&Width=460&algorithm=proportionalfords.
She didn’t, however, lose her spunk or spiritual strength.
“I will survive,” the 75-year-old grieving widow said Sunday, seated in a wheelchair as she took the microphone at her husband’s memorial service. “We will not let that gunman take our hopes.”
As the applause drowned out her words, she added: “So hang in there, everybody. Hang onto your loved ones. Keep kissing them and hugging them, because tomorrow they may not be there.”
More than a week ago, Dorwan Stoddard, 76, known to friends as “Dory,” was one of six people killed in the rampage at a “Congress on Your Corner” event outside a Safeway supermarket. In all, 19 people were shot, including the congresswoman, whose condition was upgraded from critical to serious condition Sunday. Jared Lee Loughner, 22, faces federal charges in the mass shooting. 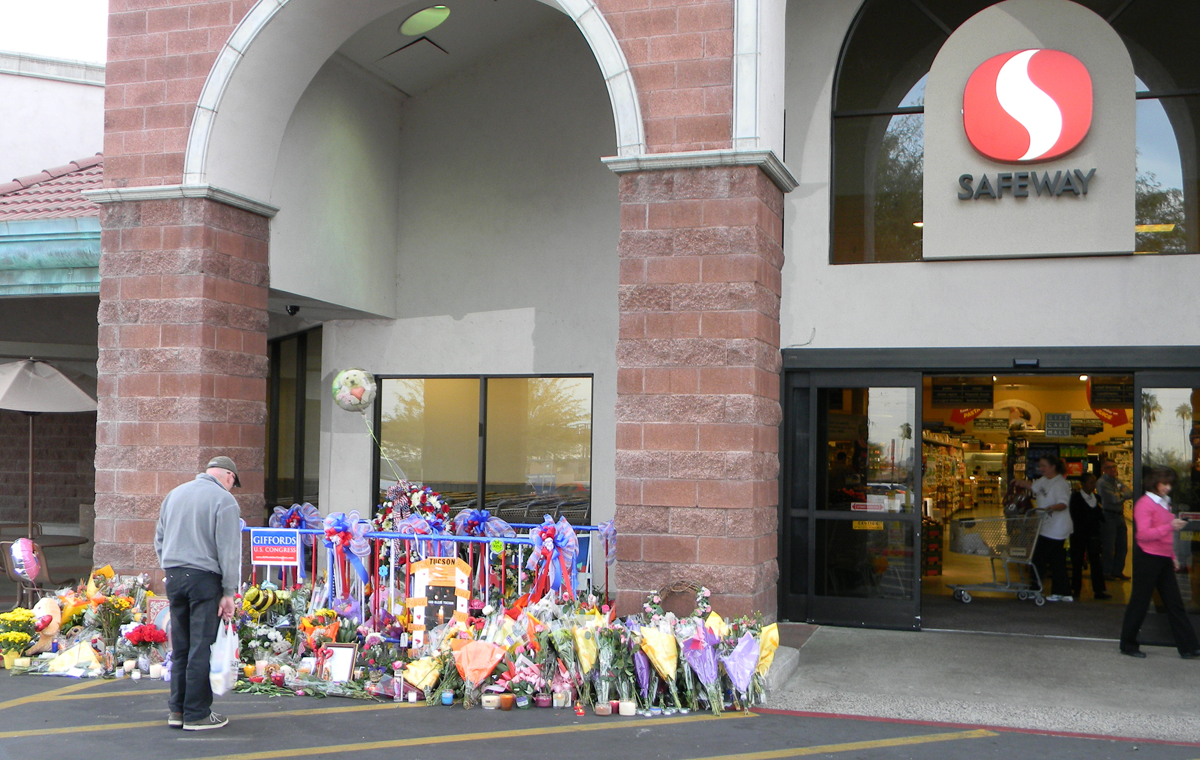 A shopper pauses and reflects Sunday at a makeshift memorial outside the Safeway supermarket in Tucson, Ariz., where 19 people were shot Jan. 8. The store reopened Saturday. (Photo by Bobby Ross Jr.)

For two hours, Dorwan Stoddard’s minister, children, grandchildren, fishing buddies and a couple he rescued through the Mountain Avenue benevolence ministry shared heartwarming and humorous stories about the retired construction worker.
A jack-of-all-trades with the nickname “Mr. Fix It,” Stoddard dedicated himself to the maintenance and upkeep of the Mountain Avenue church building. Last year, a children’s training area that he built at the back of the church auditorium was dubbed “Dory’s Room” in his honor.
Tears mixed with frequent laughter as Stoddard was remembered as the kind of guy who treated muscle stiffness with WD-40 and bandaged cuts with black electrical tape.
But he showed his soft side in dealings with benevolence cases and children.
“Dory loved the church children,” said Mike Nowak, Mountain Avenue’s pulpit minister. “He would tickle them. He would chase after them and scare them — in a nice way.” 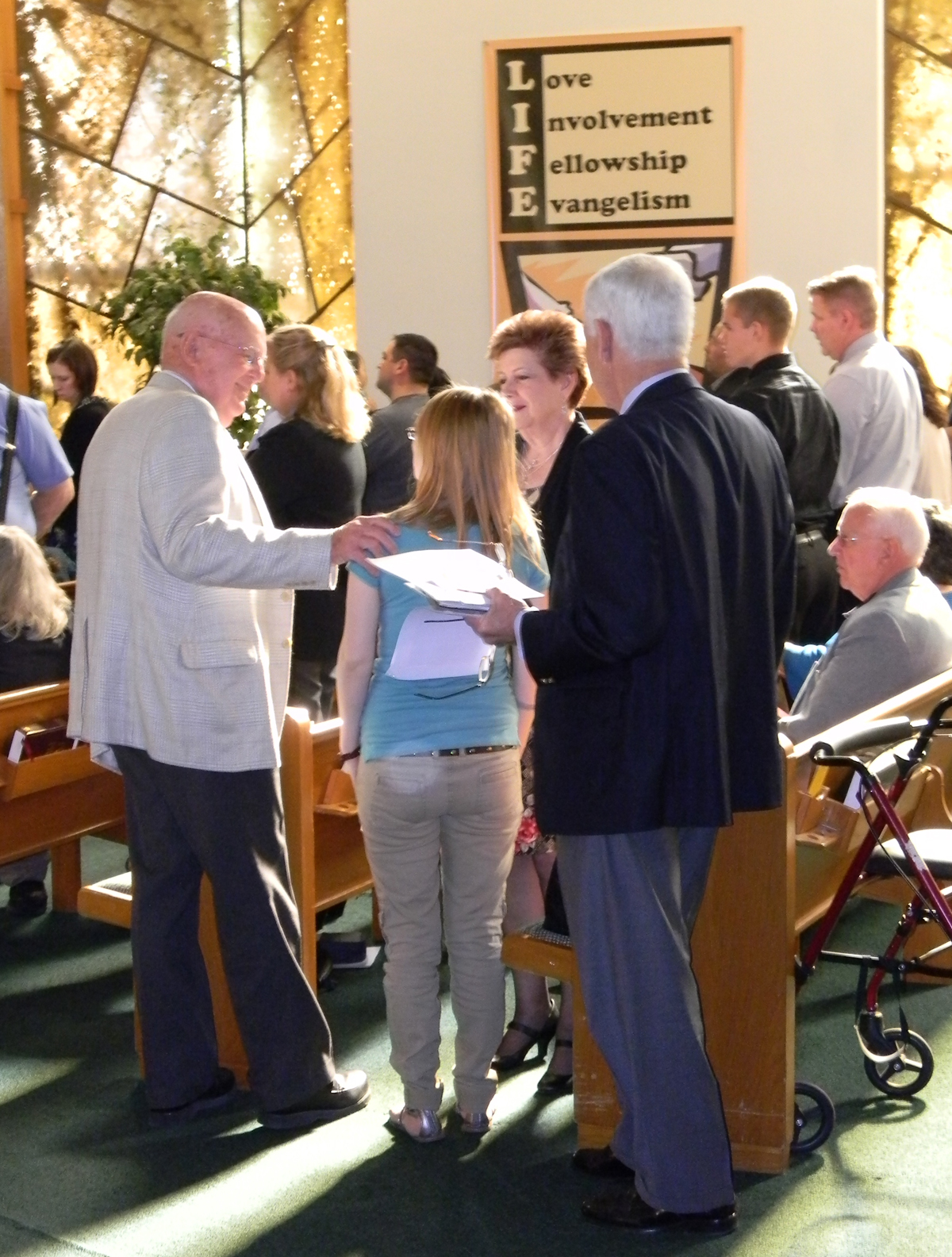 Members of the Mountain Avenue Church of Christ in Tucson, Ariz., greet each other during their regular Sunday morning worship assembly. (Photo by Bobby Ross Jr.)

Near the end of the service, Mavy Stoddard asked to say a few words. She told the crowd that Dorwan Stoddard — her childhood sweetheart whom she married 15 years ago after both their longtime spouses died — made her a better, kinder person.
“He loved God, and he loved me, and he spoiled me rotten,” Mavy Stoddard said.
“Oh, it was fun,” she added. “And the journey (after his death) will be very, very difficult. But he died for me, and I have to live for him.”
Dorwan Stoddard tried to protect his wife during the shooting and was hit in the head, church leaders said. Addressing thousands of mourners in Tucson last week, President Barack Obama praised Stoddard’s heroism: “His final act of selflessness was to dive on top of his wife, sacrificing his life for hers.”
But Nowak said in Sunday’s eulogy that Stoddard’s bravery on his final day did not make him a hero. Rather, the way that Stoddard lived did, the minister said.
“Dory Stoddard didn’t die a hero, he lived a hero,” said Nowak, who described Stoddard as his best friend. “He completed his heroic act of kindness one final time with his wife, Mavy.”
Stoddard’s survivors include four sons, four stepdaughters, 21 grandchildren, 20 great-grandchildren — and a church family that considered him and his wife “the lifeblood” of the Mountain Avenue congregation, youth ministry leader Jessica Knapp said.
Look for expanded coverage in the next print edition of The Christian Chronicle.