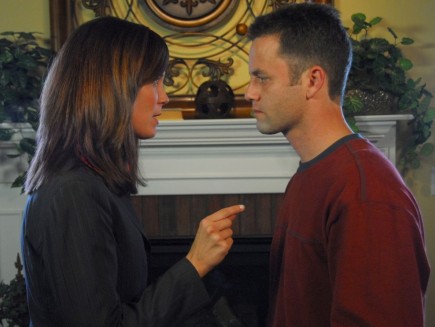 INSIDE STORY: Are you ready to ‘Fireproof’ your marriage?

Bobby Ross Jr.
Once upon a time, a princess named Tamie slipped a few minutes late into a crowded newspaper workshop class at Oklahoma Christian University.
Eager to impress this gorgeous freshman journalism major, a geeky junior editor named Bobby stood up and offered her his seat.
The charming princess, Bobby soon discovered, had an outgoing, bubbly personality and could write — and flirt — like no woman he had ever met.
It did not take him long to fall in love. It took her a bit longer — to remember his name. But that October, she accepted a date with her suitor, and he wooed her with flowers, chocolate and enlightening conversation about the 1988 presidential campaign.
Eighteen months later, at her hometown church in Harrah, Okla., the princess wed her budding prince. And they lived happy ever after.
Well, mostly.
The truth is that fairy-tale romance has a tendency of giving way to real life.
Tamie and I hastened the process by abusing credit cards, which led to financial stress early in our marriage.
All too often, we neglected our spiritual lives, blaming the demands of busy careers and young children.
In my own case, I struggled with my temper, selfishness and lust, all of which kept me from being the kind of husband that God made me to be. Even now, at the mature old age of — gulp — 40, I sometimes take my  wife for granted.
Recently, though, I was reminded what a truly precious gift from God that my wife is. This reminder came in the strangest of places — a movie theater — as I munched on buttered popcorn and Milk Duds. (For those concerned about my eating habits, let me stress that I washed down these items with Diet Pepsi.)
I had gone to see “Fireproof,” a low-budget film made by an almost all-volunteer crew and cast from Sherwood Baptist Church in Albany, Ga. I had heard that Churches of Christ — including the Davis Park church in Modesto, Calif., and the South Yukon church in Oklahoma — were renting out entire showings. I wanted to see what the fuss was about.
I knew the premise of the PG-rated film: Kirk Cameron stars as a firefighter who rescues children from burning buildings but can’t save his own marriage. Then his father gives him a book called “The Love Dare,” a 40-day challenge that teaches couples to use Scripture to learn to love unconditionally.
In general, I tend to avoid Christian bandwagons. You won’t find a fish symbol or “WWJD” bumper sticker on my minivan or a gold cross around my neck. I have no problem with such things, but they’re not for me.
So, I bought my $7 ticket to see “Fireproof” with a bit of skepticism, fearing I’d be subjected to a two-hour video sermon — and a poor-quality one at that.
Instead, I found “Fireproof” gripping as well as grace-filled, mixing Scripture with sentimentality while powerfully showing a Christian view of marriage.
Yes, it’s predictable at times, but as film critic Neil Genzlinger wrote in The New York Times, its positives include “that rarest of creatures on the big (or small) screen: characters with a strong, conservative Christian faith who don’t sound crazy.”
Not often does a film that costs $500,000 to make and features repeated references to prayer, Bible verses and Jesus Christ become a box-office hit.
But such is the case with “Fireproof,” which opened in late September as the No. 4 movie in the nation.
In Russellville, Ark., Chris Buxton, a minister at the West Side Church of Christ, teaches a young-adult class on marriage. On a recent Saturday, the class ventured out to see “Fireproof.”
As Chris explained, “Good teaching doesn’t just tell, it shows. And a movie like ‘Fireproof’ can show in ways that even the best conventional teaching never can. A powerful media experience like ‘Fireproof,’ with all its intensity and vivid images and gut-level emotion, can move those marriage principles we’ve been learning in class from the head to the heart.”
If you enjoy movies, I urge you to take time to go see this one.
It’s top-notch, if not perfect, entertainment that will remind you of the priceless treasure of marriage — and your own spouse — and perhaps inspire you to “Fireproof” your own relationship.
I left the theater intent on honoring my dear bride with more kindness, more time on my knees in prayer, more help loading the dishwasher and, yes, more flowers.
Life is no fairy tale, but God calls me to treat my wife like a queen.
Bobby Ross Jr. is Managing Editor of The Christian Chronicle. Reach him at [email protected].