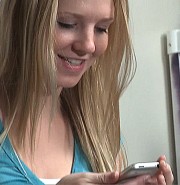 Erik Tryggestad
Would Jesus use an iPhone?
Kelsi Williamson thinks so. The Abilene Christian University freshman penned an essay about the convergence of technology and faith for her “Life and Teachings of Jesus” class.
“Jesus immersed himself in the culture of his time without letting society dictate his message,” she said in a podcast of her essay, posted on the iTunes Web site.
The 4,700-student Texas university announced recently that each member of its 2008 freshman class will receive an Apple iPhone or iPod Touch. Days later, two other colleges associated with Churches of Christ announced they also will provide students with the Cupertino, Calif., company’s sought-after technology.
This fall Rochester College will give Apple’s MacBook laptop computers to its freshman class. Students at the Rochester Hills, Mich., Christian college, with a full-time enrollment of about 675, can use the lightweight computers to access the campus’ wireless network.
Students at Oklahoma Christian University screamed with delight when they learned that their Dell laptop computers will be replaced with MacBooks this fall. The Oklahoma City university announced the switch after a recent chapel service.
Oklahoma Christian’s 2,000-plus students also will have the chance to get an iPhone, a combined cell phone, media player and Internet browser. Students who don’t want to pay for the iPhone’s cellular service can opt for an iPod Touch, a media player that can access the Internet.
Apple’s recent development of affordable laptops that can run both Macintosh and Microsoft Windows operating systems made Apple an attractive choice for the university, said John Hermes, Oklahoma Christian’s chief technology officer.
Moving to Apple unifies the campus under one brand, Hermes said, and providing iPhones and iPods helps meet the demands of increasingly tech-savvy incoming freshmen.
HIGH-TECH COMPETITION?
For colleges that compete for the same pool of students, incentives including iPhones could make a difference, Christian high school students told The Christian Chronicle.
“If a college offered high-tech gadgetry, I would definitely consider it higher on my list,” said Emily Richardson, a senior at Columbia Academy in Tennessee. Richardson is a regular user of cell phones, iPods and the social networking Web site Facebook. “Once I get to college, I will most likely be even more wired,” she said.
Charlie Monan, a senior at Central Arkansas Christian Schools in North Little Rock, said such technology would be more of a perk than a deciding factor in his choice of college.
Of course, “I’m talking on an iPhone now,” he told the Chronicle.
But the device’s popularity is secondary to its usefulness in the classroom, said Kevin Roberts, chief information officer at Abilene Christian. For at least five years, university administrators looked for ways to integrate mobile computing into their classrooms.
Before Apple released the iPhone, a team of faculty and administrators wrote a proposal to distribute a few of the devices on campus and use them to develop academic applications.
Incoming freshman will test those applications, Roberts said. In addition to reading e-mail and viewing their meal account balances, students will use the devices to take quizzes and participate in class discussions.
“This is not … a gimmick to give everybody an iPhone,” Roberts said. “We really believe that mobile learning is the way of the future.”
LEADING A SPIRITUAL iLIFE
For some students at Christian universities, the question may not be, “Would Jesus use an iPhone?” but, “Would an iPhone be the best use of Jesus’ money?”
At a recent forum, Abilene Christian students asked about the ethics of giving $400 iPhones to students while teaching them to be charitable to the poor. The university’s officials had told students that the money for the iPhones would come from the school’s general fund, not tuition fees.
Other students were concerned that the devices would keep students “plugged in” to a virtual world, which could lead them to neglect the spiritual one.
“Although I think it is a huge step … for ACU, I am not sure how well it fits in with our mission to educate students for Christian service and leadership throughout the world,” student Brian Escochea told the Chronicle. Escochea helped develop a program to measure biometrics in athletes using the handheld devices.
Bill Rankin, an English professor assisting with the Apple initiative, said he was impressed by the students’ questions. As they use the new technology, he encouraged students to continually ponder ways to “engage with technology and establish boundaries … where we feel like we don’t have to be slaves to these devices.”
Haley Dilling, a junior at Abilene Christian, said she understood the concerns, but she also sees great educational potential for the devices.
“We can’t blame technology for making our spiritual and interpersonal lives suffer,” she said. “However, we
need to be sure not to let technology distract us from things of eternal value.”