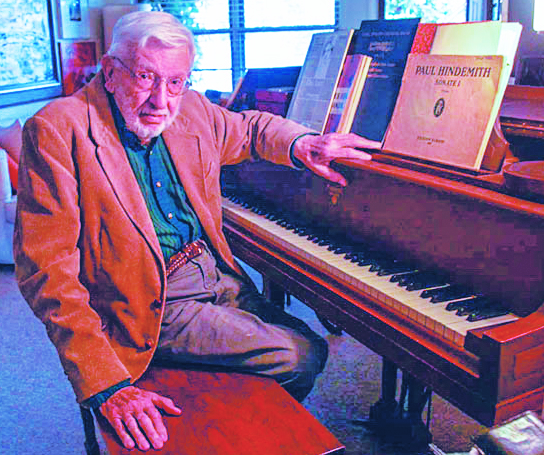 An aggressive song leader and lifelong student, Harold Fletcher taught us to think

W. Harold Fletcher, who died May 27 at age 93, was the most aggressive song leader I had ever encountered. He was the first faculty member hired for the junior college, started by Oklahoma church members, that became Oklahoma Christian University. He started teaching music there in 1950 — and retired 64 years later.

Bailey McBrideI was a freshman at OC, then called Central Christian College in Bartlesville, Okla., and Harold led opening chapel. The songs were traditional, but he refused to let them be monotonous. He didn’t let worshipers merely go through the motions. He made us think — made us involve heart and spirit.

I never had the courage to sing in his chorus, but one term I kept the hour open so that I could study in the back of the auditorium where they rehearsed.

Harold pushed his singers to feel the time and express the sentiments. He made them repeat a difficult phrase 10, 20 times until he was sure it was the best they could do. He and Mary Helon, who accompanied the chorus in rehearsals, were perfectionists.

I did take a course from Harold — music appreciation. I had no knowledge of classical music, but I had curiosity. He helped me learn about the sections of the orchestra, the sounds of the instruments. He showed me what to listen for in some of the great compositions.

One day he was teaching about the use of patterns and motifs in music. The classroom had an expensive, imported rug with a patterned design. As he was using the rug as an illustration, he suddenly realized that there was a flaw in the design. His observation was that astute.

Later we were colleagues at the college. I had coffee with him after chapel. He had great curiosity about almost everything. He pushed me to read more than literature and history.

He was a man of great faith, but he had the courage to honestly examine his doubts, analyzing and testing to see how far logic could take him.

I was assigned to work with Harold in developing a music major. Every meeting began with Harold saying, “We can’t have a major: we do not have the resources.” Gradually he began to talk about what would be needed for faculty, instructional materials and assistance.

It took us two years, but we framed a plan. Harold helped recruit and develop faculty members to make the program work.

He never stopped studying. He knew eras of music and was very effective in relating them to history, politics, and philosophy. He was a master teacher about ideas.

“I don’t know how to do it, but your goal should be to teach them to think,” he said of the capstone course he once taught. “Make them read, read, read” was his theme. Then ask them what they think.

Harold was a friend and mentor for most of my teaching career. He was a powerful influence on students and faculty. Most importantly, he was a truth seeker, and he was willing to walk alone in the interest of truth.