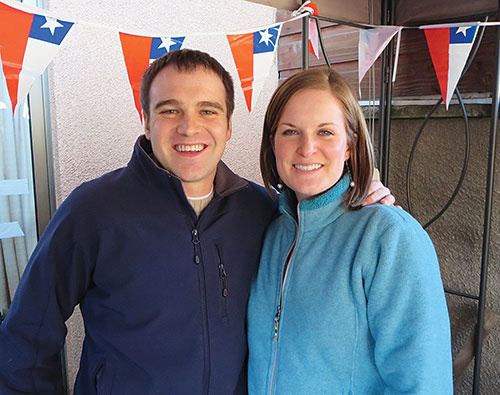 ‘Always be open to doing something new’

The two Montana natives, both 28, serve as missionaries in Concepción, the second-largest city in the South American nation of Chile. Sara Lukkason’s parents were missionaries in the serpentine-shaped country — with a 4,000-mile coastline along the Pacific Ocean and an average width of 109 miles — for 10 years. Earthquakes have devastated the city of nearly 1 million souls several times in its history. The city continues to recover from an 8.8-magnitude quake in 2010.
As students at Oklahoma Christian University in Oklahoma City, the Lukkasons were active members of Outreach, a university club focused on missions and service. Outreach “exposed us to the stories of many missionaries from around the world,” Chad Lukkason said, “and began to spark our interest in possibly doing missions ourselves.”
As they prayed about the decision, they learned of a team forming to plant churches in Concepción. At Abilene Christian University in Texas, they trained for the mission as they earned master’s degrees — Chad in divinity and Sara in marriage and family therapy. In 2011, they moved to South America. Numerous churches and individuals support their work, overseen by the Minter Lane Church of Christ in Abilene.
Their team launched the Vástago Iglesia de Cristo (Church of Christ), a congregation of Chileans with a few members from Bolivia, Colombia, Ghana and Germany.
Summarize the condition of Chilean churches today.

There are a number of Churches of Christ throughout Chile — most of which were started by missionaries in the 1970s and 80s. The capital city of Santiago has many congregations. Several more are scattered throughout the length of Chile. A few of those churches are thriving, while most remain small.
Churches of Christ are not well-known in Chile, which in some ways is a disadvantage in a culture that is suspicious of unfamiliar churches.
However, we have met many faithful members of the churches throughout Chile, and it is encouraging to see the ways they are seeking to please God and grow the church.
Tell us about your congregation.

After giving ourselves time to learn Spanish, adjust to the culture and form relationships with Chileans in Concepción, we planted the church in March 2012. Now, two years later, we have about 27 faithful members, including 19 adults and 8 children.
We meet weekly in three different cell groups. All of the groups meet together every six to eight weeks for a special church service.
Recently we have seen significant growth in commitment and leadership in several of our church members. This is encouraging.
Describe your work in Chile.

Our primary strategy is relational evangelism, which means we try to meet people, form relationships and invite them to participate in church or Bible study. Our hope is that they will recognize their need for Jesus, and we can help them become his disciples.
We have made new contacts and strengthened existing relationships through Let’s Start Talking, a Herald of Truth radio campaign, Vacation Bible School, Marriage Encounter, lectures on various topics of interest and English and baseball camps for kids. We work to move our contacts into church, where we meet weekly to study the Bible, sing, pray and take communion together.
What have you learned about cultural adjustment and adaptation?

This is an ongoing process. We were very intentional our first year in Chile to learn as much as we could about Chilean history and culture. We spent time with Chileans asking questions and participating in their lives. We learned that it’s essential for us to adapt to their way of life — when possible — in order to earn their trust and respect.
However, we also have learned that our own U.S. culture is so ingrained in us that we will never be completely Chilean. We continue to experience cultural stress, but we have learned ways to adapt. We have learned to embrace many parts of Chilean culture while recognizing and appreciating the ways that our home culture makes us different.

What about mission work has been your greatest surprise?

Although we anticipated ministry as a multifaceted project, we have been surprised at how varied our work is on a day to day basis.
Any given day may consist of Bible studies, administrative work, accounting, preparing food for large events, language study, helping friends with house painting, advertising for upcoming events and any other number of assorted jobs.
We have learned to expand our skill set — to always be open to doing something new.
Some have said that a missionary is a jack-of-all-trades and master of few. Sometimes that makes it hard for both of us since we both tend toward perfectionism, but we also see God’s provision for us as we always try to do our best work for him.
What has been most discouraging to you?

The lack of receptivity in the Chilean culture. Most Chileans would claim that they believe in God, but that does not translate into recognition of their need for a relationship with Jesus or participation in a community of faith. We encounter a lot of apathy.
However, we have learned to be patient because we believe God is working in his own time.