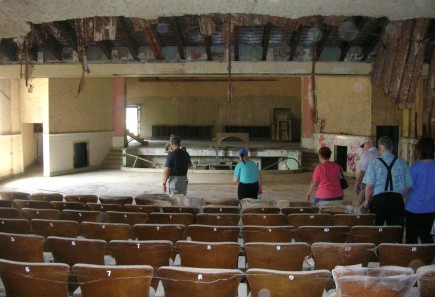 David Swearingen
ALBION, Idaho — In 1958, a new liberal arts college associated with Churches of Christ opened on the edge of the fertile Magic Valley in a small mountain range of southeastern Idaho.
Magic Valley Christian College closed a little more than a decade later.
But 50 years after its founding, the college maintains a special place in the hearts of its former students — more than 150 of whom gathered recently on the old campus for a three-day reunion.
“It’s remarkable that this tiny Christian college in a small Idaho hamlet has produced a wealth of church leaders, most of them in the West,” said alumnus Joel Coppinger, an active leader in the World Bible School ministry and a former church elder in California.
After nearly 40 years of neglect and decay, the 41-acre campus that served as the home of Magic Valley Christian College from 1958 to 1969 is once again alive with activity.
Restoration is under way at the campus that the Idaho State Legislature established in 1893 as Albion State Normal School, later renamed Southern Idaho College of Education.
During its 11 years of existence, about 1,000 students from 31 states and a few other countries studied at Magic Valley. Christian College.
Discussions were held for Magic Valley to merge in September 1969 with Columbia Christian College, now Cascade College, on the site of a former U.S. Air Force installation in Baker, Ore. The merger was not completed.
Magic Valley Christian College moved to Baker and operated for one year, then closed. Columbia Christian College remained on its present campus in Portland, Ore.
Alumni from Alaska to New Jersey to Florida came to the recent reunion, celebrating the campus renovation project and recognizing the 50th anniversary of Magic Valley’s opening in September 1958.
“This was our largest and best reunion to date,” said alumni president Gloria Amende West of Rupert, Idaho.
Reunion tributes were extended to Keith Amende, 82, of Albion and J.O. Cox, Jr., 90, formerly of Kimberly, Idaho, who served tirelessly as board members during most of Magic Valley Christian College’s short history.
Both men also have been longtime church leaders in Idaho.
Amende and his wife, Mary, live adjacent to the campus. With their six daughters, they have kept the school’s spirit alive by helping host alumni reunions since the 1980s.
Also present at this year’s event were five former faculty members, as well as a number of staff members who previously worked at the former junior college.
“Virtually all of our alumni are faithful Christians, and most of them remain married,” Coppinger said. “In itself, this represents Magic Valley’s most important legacy and enduring value.”
The former state teachers’ college in Albion sat virtually unused until October 2007, when three men from Boise — two of them brothers — bought it in an auction for $810,000.
Led by Troy Mortensen, the partners are restoring the campus as a conference and retreat center.
A small dormitory/apartment building with 12 units is completed and open.
Work on two other buildings, including a second, larger dormitory, is under way.