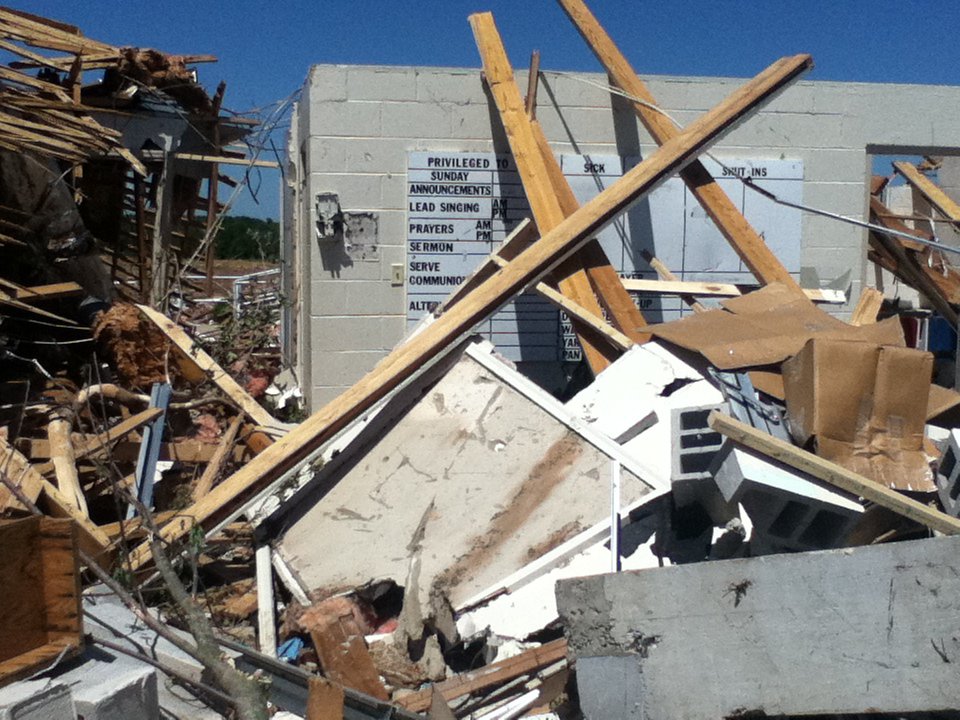 Alabama minister: ‘It’s like a bomb went off for a half-mile wide’ (Updated Wednesday)

The scene at the Bethel Church of Christ in Athens, Ala., in the aftermath of the April 27 tornadoes. (Photo by Wayne Goode)

About 30 people — Christians and non-Christians alike — waited out the April 27 swath of tornadoes that killed hundreds across seven states in the basement of the Bethel Church of Christ, about four miles east of Athens, Ala., along U.S. Highway 72.
“About the best thing I can say is, they didn’t have a scratch. They were all safe and sound,” minister Jimmy Clark told The Christian Chronicle.
All around them, though, was destruction.
The church auditorium, a classroom annex and a nearby home where the preacher used to live all were destroyed.
“It’s like a bomb went off for a half-mile wide,” said Clark, noting that 14 of the church’s families lost their homes.
The force threw Bethel church elder Jerry West, who lived directly across the street from the building, into his front yard.
West suffered a broken collarbone and dislocated shoulder. He stayed overnight in the hospital. His house is gone.
On Sunday, May 1, the congregation moved its service to the West Hobbs Church of Christ in Athens. A crowd of 360 showed up, and eight members asked to be restored.
“People realize now that things don’t matter,” Clark said.
To help: Bethel Church of Christ, 25815 U.S. Highway 72 East, Athens, AL 35613, (earmark funds for church building or disaster relief).
See other Chronicle coverage of the April 27 tornadoes.
Thanks to readers who provided contact information to reach Clark and update our original post.