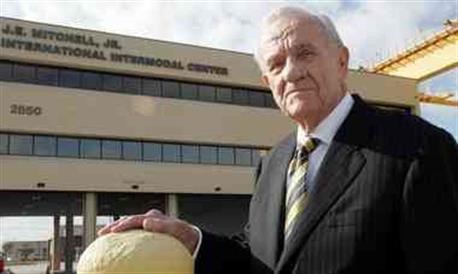 Ed Mitchell stands outside the J.E. Mitchell Jr. International Intermodal Center, at the Huntsville airport, named in his honor in 2007. (Photo via www.al.com)

The Huntsville Times in Alabama reports on the July 26 death of J.E. “Ed” Mitchell Jr., a former member of the Hunstville Airport authority.
Mitchell’s work to develop the Huntsville International Airport and the surrounding region transformed the community over the past five decades, the newspaper reports.
Mitchell was a member of the Mayfair Church of Christ in Huntsville.

“Everything he did, he did it ‘wide open,'” said Gary Bradley, pulpit minister at Mayfair Church of Christ. Mitchell was a serious Bible scholar, had memorized all four chapters of the book of Colossians, and was deeply involved in getting a television Bible study series onto the Internet, Bradley said.
He said that Mitchell, who had been a strong force in the lobbying efforts that led to the creation of the Interstate 565 spur from I-65 into Huntsville, was in the last few days still thinking about the dream of a Memphis-to-Atlanta super highway and a high-speed rail system.
“He was about ‘kingdom’ work,” both spiritually and on Earth, Bradley said.