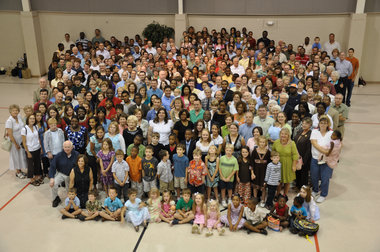 Members of the Central Church of Christ in Huntsville, Ala. (Photo via www.centralfamily.org)

In a recent blog post we asked, “What strides are Churches of Christ in the U.S. making toward racial integration?”
The Huntsville (Ala.) Times features the Central Church of Christ, a diverse congregation that devoted itself to intentional outreach across racial barriers in the late 1970s, according to elder Richard Brown:

“We looked into the Bible,” Brown said. “And what we found is that, over and over, with God, there is no favoritism.”
The elders recruited Tom and Gail Bogle, a white couple who had been working in campus ministries at the University of Florida. The Bogles said to recruit Ed and Delois Smith, a black couple who had been helping them.
“We packed up, and came without jobs,” remembered Delois Smith. Smith, an educational psychologist, is now vice-president for diversity at the University of Alabama in Huntsville and remains, with her husband, Ed., an active member of Central. They were among the first African Americans to join the church.
A church elder provided a house to live in, rent-free for a few months, while they found jobs – Delois with the Girl Scouts, Ed, who has a degree in finance, driving a truck. Each evening, after work, the Smiths would head up to campus to give Bible studies and talk with students. Their genuine friendship with the Bogles helped show, by example, what relationships can look like across racial lines.
Slowly, at Central, the hour Dr. Martin Luther King Jr. famously described as America’s “most segregated,” began to become America’s most integrated hour.