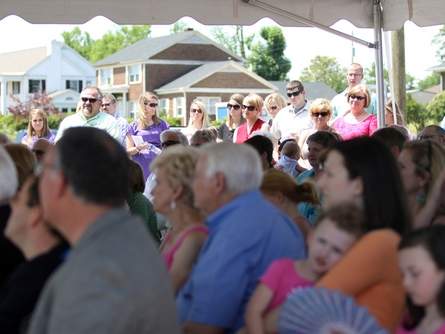 A crowd gathers during a groundbreaking ceremony for the new Central Church of Christ building in Tuscaloosa, Ala. (Photo by Marion R. Walding, The Tuscaloosa News, via www.tuscaloosanews.com)

The Tuscaloosa News in Alabama reports:

Central Church of Christ was destroyed in the April 27, 2011, tornado.
But the destruction didn’t stop the congregation’s outreach to the community, especially in the areas surrounding the church on Hargrove Road near the Forest Lake neighborhood. The church made hundreds of meals and deployed about 2,000 volunteers last summer from a tent on the site of its former building, said minister Lee Jamieson.
As the church celebrated the construction of a new building on its former site Sunday (April 29), it’s more important than ever for the congregation to continue serving the Tuscaloosa community, Jamieson said. As part of the groundbreaking, the church unveiled its construction design. Construction will take place in two phases.

Read the full story.
See The Christian Chronicle’s February news report on the church’s journey since the storm.