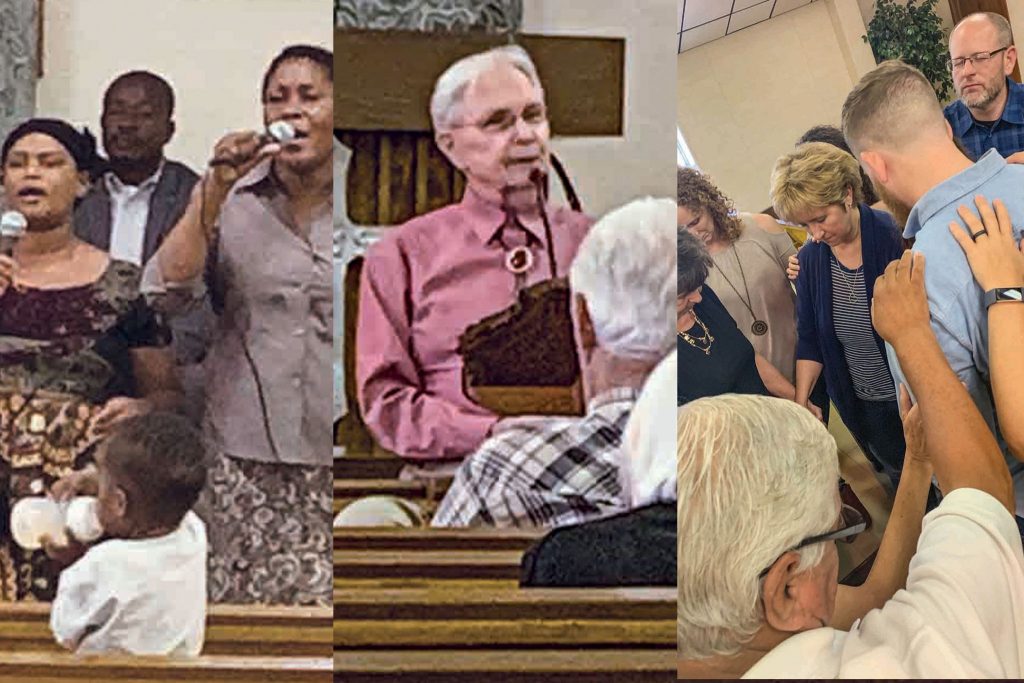 A non-Sunday school congregation in West Texas welcomes two other groups to use its building.

ABILENE, Texas — The tan stucco building doesn’t look like much — not a lot of grass or landscaping outside. Just a handful of cars dot the asphalt parking lot at any of the three worship services conducted each Sunday at the Northwest Church of Christ building.

The fellowship hall is large, but there are no classrooms — the Northwest church began as a merger of two other non-Sunday School congregations back in the 1980s.

“None of us believe that anymore, but the building doesn’t have any classrooms, and we’re too old to start over so here we are,” preaching minister Pat Andrews said.

The auditorium could seat maybe 200. However, the only time that happens these days is when the funeral home next door borrows the space for a memorial too large for its own cramped chapel.

Northwest and the other two church groups it welcomes on Sunday each seek in their own way to personify the Christian spirit of hospitality.

Thirty were present for Northwest’s 10:30 a.m. assembly on a recent Lord’s Day, including a young brother and sister who read Scripture and showed off their sign language skills during a mini-lesson about Jesus.

On a good Sunday, the congregation might draw 40, Andrews said.

“These days we’re in the graveyard a lot,” he added. “We were there yesterday.”

Andrews started preaching for this congregation in 1998 and jokes that he preached it into the ground. A quarter-century later, he has to preach sitting on a stool with his cane propped nearby. He makes no pretense about the small body’s ability to attract or retain new members. But they do church really well, practicing hospitality, perhaps entertaining some angels unaware.

Instead of a Sunday evening assembly, Northwest members take communion to residents of a nursing home. Once a month, they have a potluck after church. Everyone stays.

On the first Wednesday night of the month, they have a potluck with The Refuge, a progressive congregation that shares their building and meets there at 5 p.m. on Sundays.

Last year, Northwest ladies gave a baby shower for the wife of Albert Kubura, the minister who serves the third church that uses the building.

It’s a Pentecostal church composed almost entirely of Burundi refugees who set up for worship in the Northwest auditorium every Sunday afternoon. About 30 people attend that service, too, many of them women in brightly colored headdresses. Young people sing on microphones in their native Kirundi language, leading a spirited and energetic worship that often lasts all afternoon. 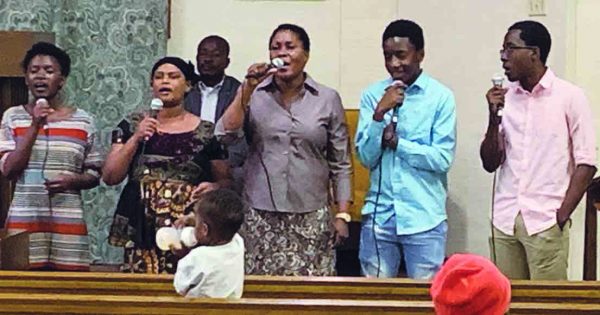 A Pentecostal church of mostly African refugees uses the building in the afternoon.

Members of the Northwest church and the international group greet each other in the foyer and in the parking lot. The young children run to hug the elderly friends they’ve made coming and going each week. One of the boys had a birthday in July and insisted on inviting the children from all three congregations to his party so that no one would be left out.

The international group approached the Northwest church to see if they could use the auditorium. Providentially, perhaps, the first person they contacted was Ian Shelburne, who grew up in Malawi and had worked in Africa for many years as a missionary. He spoke their language and urged Northwest’s elders to welcome them.

Andrews said Northwest’s leaders looked at the statement of faith describing what the group believed. Except for one item about the tribulation, it was all consistent with what he preached every Sunday.

And so the Pentecostals came, and over time friendships have developed. One of the young boys sneaks in the back to sit with an older friend in the Northwest worship assembly if his family arrives early.

Abilene, a West Texas town of about 120,000, is the home of Abilene Christian University, which is associated with Churches of Christ. In all, Abilene counts roughly 30 Churches of Christ, according to a national directory published by 21st Century Christian. 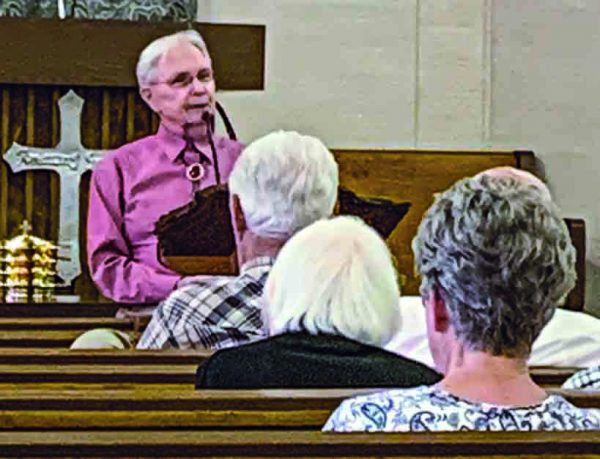 The Northwest Church of Christ meets for Sunday morning worship.

And it has one with an “NCp” designation by its name in the “Churches of Christ in the United States” directory, meaning that it is “Non-Class, but either uses or does not oppose the use of a located preacher.” That would be the Northwest church.

Most of the Northwest members are at least 60. Many of them, including Andrews, are past 80. They struggle to meet expenses, the budget supplemented by modest contributions from the funeral home each time it borrows the auditorium.

And The Refuge makes a gift each month to Northwest to help cover utilities, though that wasn’t something the host church expected when it welcomed that congregation to its building.

A CHURCH FOR ‘MARGINALIZED PEOPLE’

Congregants of The Refuge bear little resemblance to the morning worshipers. Minister Damon Parker and his wife, Melody, have been part of several church plants in Abilene over the past decade, each different but all focused on being a place for people who don’t have a place in another church, Parker explained. 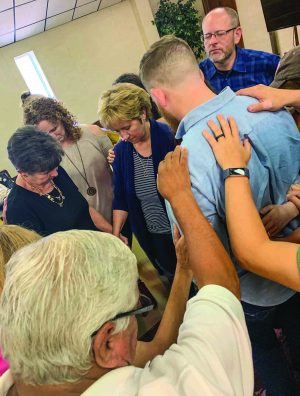 The Refuge, a progressive congregation, worships there on Sunday evenings.

“Marginalized people, mentally ill people, LGBTQ people — about 20 percent fall into those categories,” Parker said. “We don’t view that as doing outreach to people who are mentally ill or struggling. They’re just part of our church.”

The other 80 percent include several families with young children, and some middle-aged and older couples and singles. Until two years ago, most of The Refuge members were part of the Hope Church of Christ, a storefront church that was started by members of the Hillcrest Church of Christ as an outreach but later dissolved.

The Parkers have eight children, ages 2-18. Their oldest son, a freshman at Abilene Christian University, plays the guitar and regularly leads worship. On a recent Sunday, the communion thought was brought by Julie Neill, who shared her story of a divorce after 37 years of marriage.

Nervous and soft spoken, Neill said, “God has been so faithful. He has shown himself over and over in big ways and small ways — in the smallest details of my life.”

The Refuge is as different from the African church and the Northwest congregation as the other two are from each other. But it shares the spirit of hospitality that made it possible for them to meet there.

Members eat together each week and make it a point to plan other activities that help people feel a part of the church family.

Parker said a member had recently observed, “We don’t do formal very well, but we do informal amazing.” He agrees.

“Our goal is for everyone to be consistently in everyone’s life,” he said. So instead of a Wednesday night service, The Refuge has created a calendar of weekly events: visiting shut-ins, planning a cook-out and a movie for a recent holiday, attending a house concert together. And everyone participates, Parker said.

“We want people who feel outside in life to feel inside,” he said. “Having everyone at church on a Sunday night doesn’t accomplish that. These other things do.”

Doug Foster, professor of church history at Abilene Christian University, said the non-Sunday school thread within Churches of Christ has long included congregations he described as very open and accepting.

“Certainly, some are not, but from the earliest days there has been a strain of that group that is more open, more inclusive, less sectarian,” Foster said.

The Refuge leadership met with the elders at Northwest before they began meeting at their building. Parker said he wanted them to understand the inclusive nature of their worship and the welcome they extended to folks who might not be welcomed elsewhere.

Andrews recalled the same meeting with a smile, and the words of Jesus in Mark 9, “Whoever is not against us is for us.”

It was much like the conversation they had when welcoming the Burundi group.

“Who knows?” Andrews told other Northwest members. “They might learn something by being here. We are sure learning from them.”

CHERYL MANN BACON served for 20 years as chair of the Department of Journalism and Mass Communication at Abilene Christian University. In retirement, she is enjoying freelance writing and consulting, especially with churches.