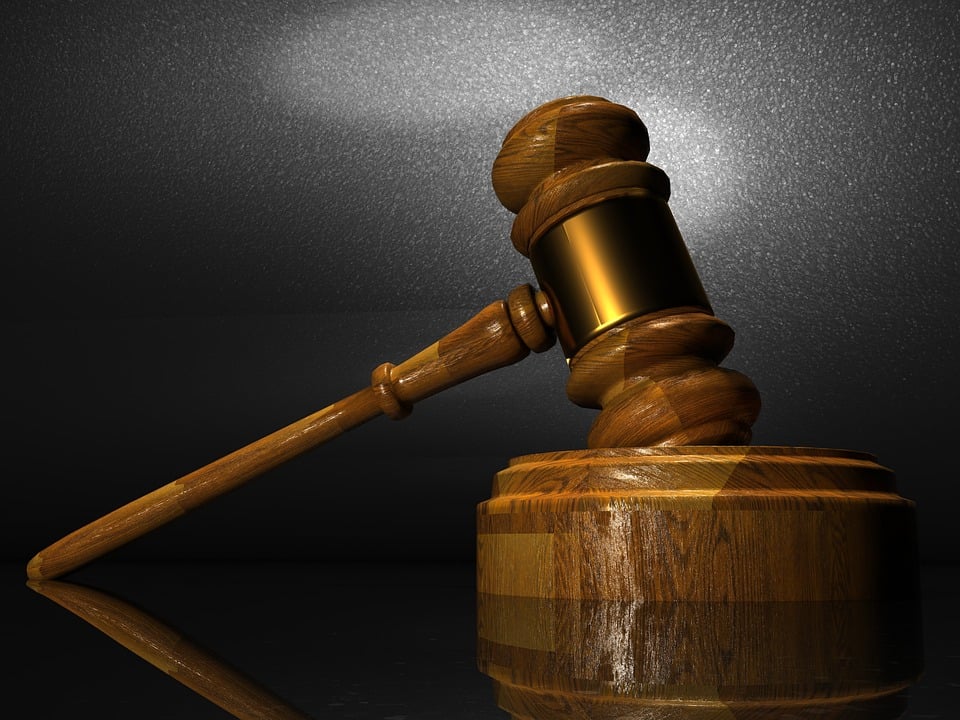 'My hope is that the Spirit that showed up in the courtroom that day will continue to show up and lead people everywhere to afford all criminals this justice from the high ground of morality.'
B. Chris Simpson

Many well-intended people shared their opinions of the viral hug of forgiveness between Brandt Jean and Amber Guyger.

Guyger is the fired police officer convicted of murdering 18-year-old Brandt’s older brother Botham Jean, 26, who was sitting in his Dallas living room eating ice cream when Guyger entered, believing it to be her apartment, and shot him.

My response to Brandt’s hug and forgiveness was filtered through my personally knowing Botham. What I knew of Botham Jean led me to believe that this is exactly what he would have wanted Brandt Jean to do. 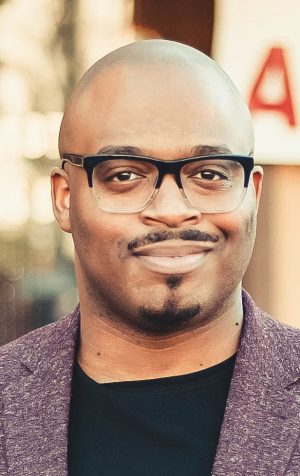 Apart from that filter, both as a Christian and a black man, I saw Brandt’s actions as heroic. From the Christian perspective, I believe he exhibited Christ-like forgiveness, which is a feat worthy of praise and emulation.

For generations, that high ground has granted black people peace and an escape from a type of sorrow that can kill a person from the inside out.

Sadly, it is also true that some black people throughout history have struggled with a type of “Stockholm syndrome,” willing to identify with and even excuse the behavior of those who oppress us. When true forgiveness happens, I applaud it and am taught by it. However, when the “Stockholm syndrome” kicks in, I find it to be sad, angering, unspiritual and a huge detriment to the self-esteem of black people.

There are a number of perspectives of Brandt’s actions, and each perspective has some validity. When reading the comments of Botham and Brandt’s sister, Alissa Charles-Findley, she clearly supports Brandt yet still respects the differing views that others may have of his actions.

Personally, I choose to believe Brandt at his word. He said his decision to forgive Guyger was a product of his Christian faith and a homage to what his brother would have wanted for her life. He also based his actions on the authenticity of her remorse. He said to Guyger, “if you truly are sorry…” After this, he continued speaking to her and then hugged her.

I have no reason not to believe Brandt. He is my brother in Christ who has suffered so much. I am convinced that the forgiveness he offered Guyger brought him healing and that is something I would never deny him, or anyone. I choose to stand with him. In addition to this, I choose to pray for Guyger in hopes that she will be given freedom in Christ so that God may be given even more glory.

It is more important, however, to understand that the concept of forgiveness and justice are not mutually exclusive. The Jean family and any black person can both forgive Guyger and still demand that she meet justice. The prophet Micah combines these claims, “He has shown you, O mortal, what is good. And what does the Lord require of you? To act justly and to love mercy and to walk humbly with your God.”

One must be dedicated to both mercy and justice. And, we can pursue both at once. This joint pursuit of mercy and justice is in God’s character, for he is the type of father who is dedicated to “keeping steadfast love for thousands, forgiving iniquity and transgression and sin, but who will by no means clear the guilty, visiting the iniquity of the fathers on the children and the children’s children, to the third and the fourth generation.” (Exodus 34:7). In my opinion, Guyger needs forgiveness and justice. I do not think her sentence of 10 years is long enough. Moreover, I do not think that Brandt’s forgiveness in any way downplays the guilt and atrocity of Guyger’s actions.

One must be dedicated to both mercy and justice. And, we can pursue both at once.

Brandt’s actions are better understood alongside the actions of all the others in the courtroom that day. When preaching two Sundays ago on this very topic, I emphasized the collective nature of what happened that day. We must be willing to see the power of God working not just through Brandt but through the actions of all those who were following Christ that day. (See Holmes Road Church of Christ Facebook Page for a sermon entitled “One Body” where Brandt, the family’s and Judge Tammy Kemp’s actions are discussed.)

Posted by Holmes Road Church of Christ on Sunday, October 6, 2019

In one space, Brandt forgave Guyger in a shocking and public way. This act was unusual and could be considered inappropriate in a courtroom. In another space, Allison Jean, Brandt and Botham’s grieving mother, was in the corridors of the courthouse challenging the City of Dallas to hold the police department accountable for what she details as a list of injustices. In another space, Judge Kemp comforted the Jean family and Guyger, the former with hugs but the latter with a Bible. A Bible lesson and a hug — again, these actions are considered by some to be unethical and against the rules.

In all these spaces, we cannot forget that those people who were seeking to follow Christ must be treated as one unified body. For there is only “one body…” (Ephesians 4:4). The sum of their actions painted a picture that is the image of Christ. Brandt looked like Christ on the cross asking God to forgive his killers, for they knew not what they were doing. Allison Jean looked like Christ in Matthew 23 when he boldly and publicly challenged the injustice of the Pharisees. And of course, Judge Kemp looked like Christ when he sat at the well in John 4 with the Samaritan woman to whom he offered solace and a future.

When we consider all the actions that day of these Christ followers, we see a powerful testimony of the Christian faith and the working of the Holy Spirit. Three people acting on faith from their respective spaces accomplished four things: 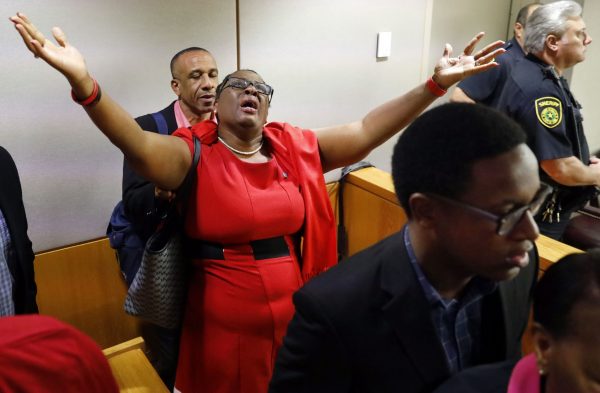 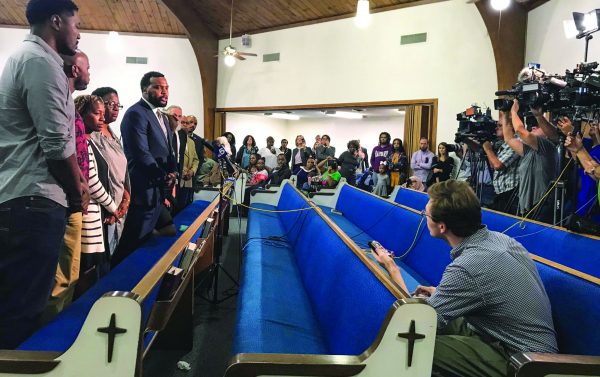 Attorney Lee Merritt, with Allison Jean to his right, speaks to the news media at the Dallas West Church of Christ.

Those three strong, black followers of Christ found high ground in that courtroom.

The most important thing … is not that the forgiveness was too great but that we hope such forgiveness and compassion can be shown to … black men who are serving far longer sentences for committing far lesser crimes.

The most important thing in all this controversy is not that the forgiveness was too great but that we hope such forgiveness and compassion can be shown to many other criminals, particularly black men who are serving far longer sentences for committing far lesser crimes.

My hope is that the Spirit that showed up in the courtroom that day will continue to show up and lead people everywhere to afford all criminals this justice from the high ground of morality.

Those who collectively represented Christ that day and since, including Botham and Brandt’s father, Bertrum Jean, through his comments after the fact, accomplished the call God gave to us through the prophet Micah.

They sought mercy. They called for justice. And even in the face of an imperfect justice, they humbly walked with their God by leaving the unknown in his hands.

Chris Simpson is passionate about multicultural ministry and helping to heal race relations in our society. He ministers for the Holmes Road Church of Christ, a multiracial congregation in Whitehaven, a neighborhood in which he lives and works on the south side of Memphis, Tenn. He and his wife, Halley, have two children, Elle and Grey. Contact him at [email protected].