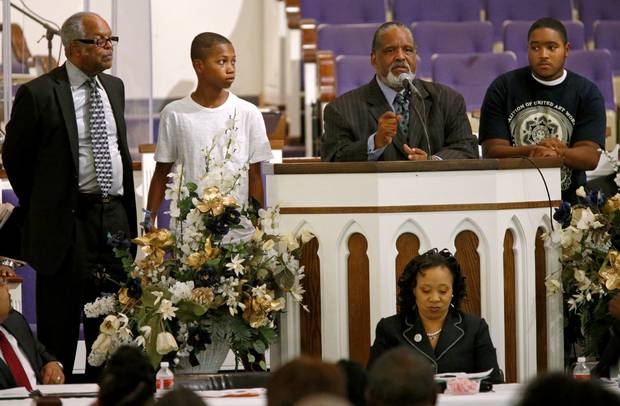 Minister Arnelious Crenshaw Jr. speaks beside the Rev. J.A. Reed, at left, Derrick Walter, Jr., and Anthony Byone, at right, during the start of a forum, put on by Northeast Church of Christ and Fairview Baptist Church, to discuss lessons from the Trayvon Martin and George Zimmerman case at Fairview Baptist Church in Oklahoma City, Wednesday, August 7, 2013. (Photo by Bryan Terry, The Oklahoman)

Two Oklahoma City ministers called their teenage grandsons up to the altar and the four of them faced the crowd sitting in the church pews on Wednesday.
Trayvon Martin looked like them — young and black, one of the clergymen said, pointing to the teens.
“You want to know why we’re here? We’re here because as people of faith and as people concerned about our community — mothers and fathers, grandmothers and Paw-Paws — we’re here because we love our children,” Arnelious Crenshaw Jr., minister of Northeast Church of Christ, said at a community forum at Fairview Baptist Church.
“We’re here so we can say to our sons and daughters, to our grandsons and granddaughters, that we tried to get something done to help ensure that there is not another Trayvon Martin in Oklahoma City.”
The poignant moment came at the beginning of the Wednesday’s forum hosted by Crenshaw’s church and Fairview, led by the Rev. J.A. Reed Jr.
…
About 400 people attended Wednesday’s event in Oklahoma City, which included a diverse group of panelists — from a police officer, an attorney and several judges, to pastors, a legislator and an educator. Each speaker shared their opinions along with answers to questions given to them beforehand.
The gathering lasted for more than two hours as the crowd listened attentively to the presentations. Racial profiling, the need for parents to become more involved in their children’s education, and activities both inside and outside school were among the topics that were discussed during the event.

Read the full story.
During the forum, Murray urged attendees to become mentors for youths and to monitor their children’s friends and whereabouts.
Crenshaw’s grandson, 17-year-old Anthony A. Joseph, also spoke during the forum:

He said as a young black person, he is aware that racism exists but he also thinks that youths need to be more accountable for what happens in their lives.
“We’re killing ourselves,” Byone said.
He said black teens can do many things to make life better for themselves. He said they should focus on their high school education and going to college, refrain from blaring profanity-laced music as they ride through neighborhoods, and always be aware of their surroundings, among other things.
“It’s up to us to change it. There are things that we can do,” he said.