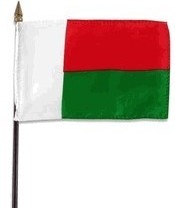 Erik Tryggestad
After anti-government protests that resulted in more than 100 deaths, Marc Ravalomanana — a man with ties to a church-supported ministry and two Christian universities — stepped down as president of the island nation of Madagascar.
Ravalomanana, elected in 2002, gave World Christian Broadcasting permission to build a transmitter in the developing nation off Africa’s east coast. The Franklin, Tenn., ministry plans to use the antenna, now under construction in Madagascar, to send its programs into South America, Africa and the Muslim world.
Although the former president was a friend of World Christian, Henry Huffard, the ministry’s senior producer for Africa, stressed that “we are not a political organization.”
“We commit ‘the powers that be’ to God in prayer,” Huffard said, “and pray that his will be done in regard to the leadership of Madagascar.”
“Reliable sources inside Madagascar encourage us to proceed with our radio station project,” Huffard said.
“After a short break due to the unrest, project coordinators Kevin and Nancy Chambers and our Malagasy crew have resumed construction on the site as usual.”
The former president also built relationships with Abilene Christian University in Texas and Lipscomb University in Nashville, Tenn. In 2005 Ravalomanana traveled to Texas to visit 24 Malagasy students sent to Abilene Christian through the Madagascar Presidential Scholars Program. He returned in May 2008 to speak at their graduation.
A few months later Lipscomb enrolled 26 Malagasy students in disciplines including nursing and pharmacy. Madagascar’s government helped pay tuition for students at both universities.
Ravalomanana’s pro-business policies angered his political opponents, including Andry Rajoelina, a former mayor of Madagascar’s capital city, Antananarivo. Particularly contentious was a proposed agreement with South Korean industrial conglomerate Daewoo, which planned to lease millions of acres of land in Madagascar to grow crops for Koreans. In return, Daewoo promised $2 billion in infrastructure investments and 45,000 jobs.
Rajoelina and his supporters, who included much of the nation’s military, said that the deal was unconstitutional and a form of neo-colonialism. They accused Ravalomanana of corruption and called him a dictator.
Violent protests followed, and on March 17 Ravalomanana turned control of Madagascar over to the head of the military, who quickly transferred power to Rajoelina. International communities, including the African Union, denounced the takeover as a coup. Rajoelina, 34, suspended the nation’s parliament and promised democratic elections in two years.
Members of the Abilene Christian community hosted a prayer service for Madagascar recently, the Optimist student newspaper reported.
“I thank God for bringing all of you into our lives,” George Pendergrass, the university’s director of multicultural enrichment, told the Malagasy students. “God has a wonderful will for turning bad into good.”
The recent unrest did not create significant problems for the three Churches of Christ in the Antananarivo area, which have no connections to the former president.
“Our brothers and sisters in Christ know enough to stay away from the areas of demonstrations that can become volatile,” missionary Barry Rosie told The Christian Chronicle on March 24.
Rosie and his family oversee Betikara, a children’s home in the Malagasy capital. One child served by the ministry requires dialysis three times each week at a government hospital near the scene of recent protests.
“Getting him to his treatments and finding the medicines and expendables that are needed for him every day is difficult due to the ongoing demonstrations,” Rosie said.
“Please pray for Madagascar and (the Lord’s) church in Madagascar,” he added.