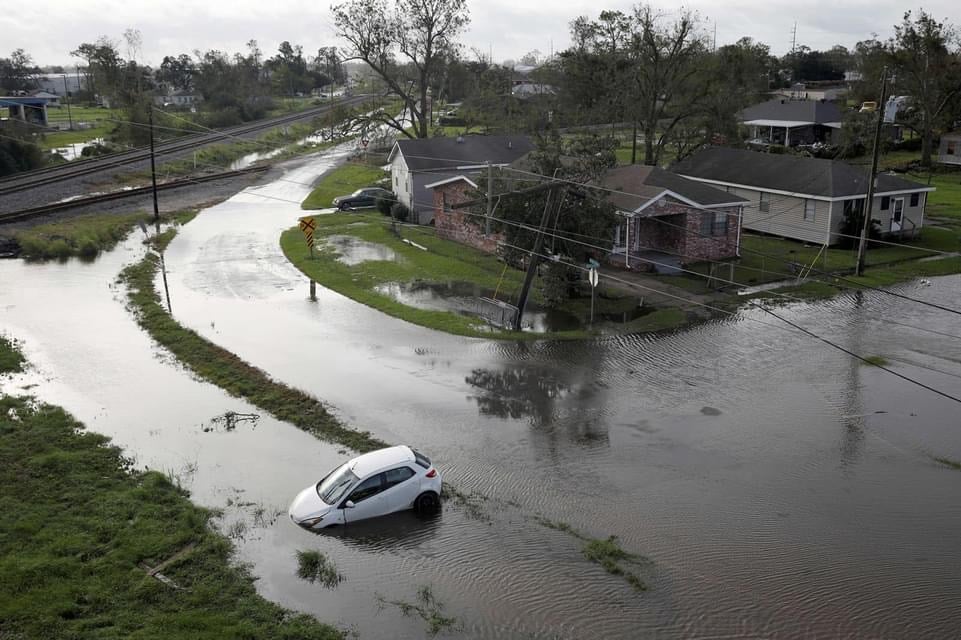 Weeks after the storm, Churches of Christ help those in need — even as new threats emerge. ‘We can’t take much more,’ mayor says.

‘When we survived Hurricane Katrina, we said, ‘We can survive anything,’” Eric Dishongh said. “Hurricane Ida definitely is testing that hypothesis for sure.”

Dishongh, minister for the Hickory Knoll Church of Christ in Harahan, La., said he felt blessed when he returned to his home in St. Charles Parish after 17 days. Damage from the Category 4 storm was minimal — a downed fence and a few leaks inside. Just down the street were devastated homes that would have to be rebuilt.

“I just think of that as the grace of God, really,” Dishongh said. “I don’t have any other explanation.”

Dishongh wasted no time in assessing the needs of his community. The Hickory Knoll church, located in Jefferson Parish, became a hub for supply distribution to the surrounding community.

Churches of Christ Disaster Relief Effort Inc. sent a 53-foot-long truck loaded with essential items that Dishongh and his congregation gave to those in need. It was one of 12 shipments the Nashville, Tenn.-based ministry sent to Louisiana between Aug. 31 and Sept. 13, director Mike Lewis said. Supplies included food packages, essential items and cleaning supplies.

Dishongh fought back tears as he recalled partnering with the Goodwood Church of Christ in Baton Rouge following Katrina’s devastation in 2005. The Goodwood congregation “kind of served as a spearhead for the relief efforts from a financial side,” he said.

“And I’m envisioning and thinking that the Hickory Knoll church is going to be in that position this time,” Dishongh added, “just trying to help as many people as possible.”

Since his return, Dishongh said he has watched his community make progress every day. In the past week, the electric company has restored power to his house and to many of his neighbors.

Most impactful, he said, is watching churches serve the community.

“Not every congregation is serving the same exact way right now,” Dishongh said, “but everybody is serving.” 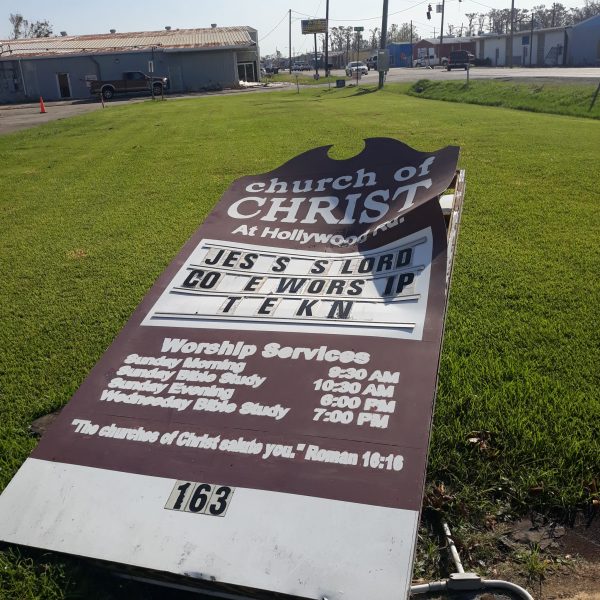 The Hollywood Road Church of Christ sign lies on the ground damaged after the storm.

An hour away, the Hollywood Road Church of Christ in Houma, La., partnered with the Disaster Assistance CoC ministry to feed its community. In one day, the volunteers distributed 1,200 meals.

“We’re ground zero now. We’re in the middle of it a whole lot more than we were for Hurricane Katrina.”

“Speaking from experience and living here my whole life, I would say — and other people have said — this is probably the worst hurricane we have ever seen,” Liner said. “As far as the damage is concerned in this area, I’ve seen Hurricane Katrina, Hurricane Andrew, and some of the older members that I’ve spoken to experienced even some older hurricanes — significant hurricanes like Hurricane Betsy — but even they will tell you that this is probably the worst they’ve ever seen.”

“We’re ground zero now. We’re in the middle of it a whole lot more than we were for Hurricane Katrina.”

While some communities, including Harahan, are in clean-up mode, Liner said that the needs in Houma are shelter and food rather than cleaning supplies.

“You can bring the supplies, but if people don’t have anywhere to store them because their homes are destroyed, the supplies really don’t help a whole lot,” Liner said. “It’s a bad situation as far as housing is concerned.”

The Hollywood Road church building itself was damaged significantly. The storm removed 50 to 60 percent of the roof shingles, allowing water to seep in and damage the floors, Liner said. The congregation has met in the parking lot for Sunday services since the hurricane, a hot alternative in the Louisiana weather. Despite the unpleasant conditions, people have continued to fill the seats, with attendance doubling in a single week.

“I guess, as a preacher, there’s no shortage of material right now to preach from,” Liner said. “So even though I’m working, I’m constantly looking, and sermons are popping up because of everything that’s happening.” 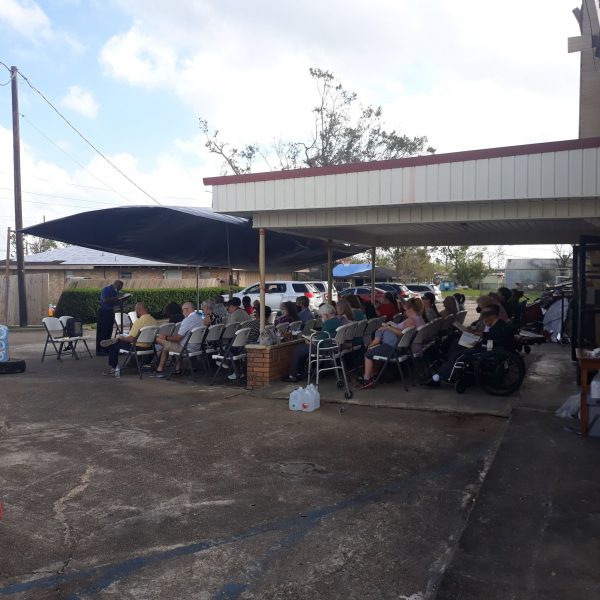 The Hollywood Road congregation meets outside the building in the parking lot.

‘This is our Katrina’

While groups are returning to Houma and gathering in worship, other parts of the state remain under mandatory evacuation orders due to unsafe conditions.

In the coastal village of Jean Lafitte, the hurricane significantly damaged about 85 percent of homes. The levees, overtopped during the hurricane, brought floodwaters of historic levels into the community.

“There is a saying around here right now that this is our Katrina,” said Kerner, who estimated that a quarter of the village’s 2,000 residents became homeless instantly. “It’s the worst storm in our history. Thirty years ago, we were an inland community, but with the destruction of the coast we’ve become a coastal community overnight.” 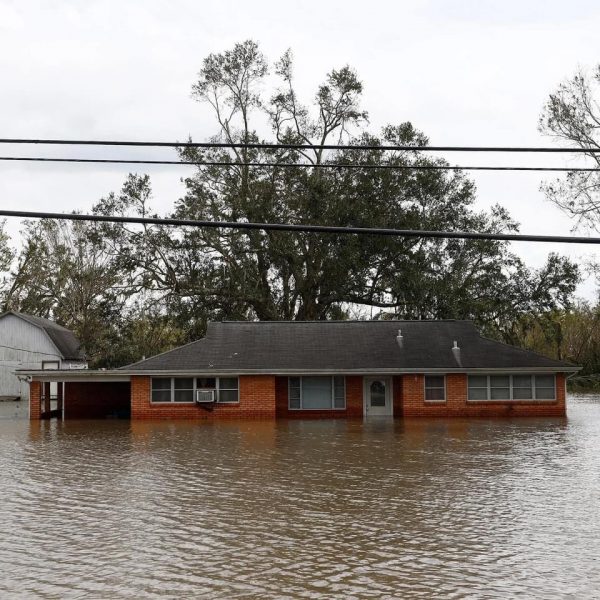 A house in Jean Lafitte is submerged in floodwaters.

Unable to legally set up shelter without the protections of levees, city officials began sending people to two nearby shelters in Jefferson Parish.

When the Churches of Christ Disaster Response Team arrived in Jean Lafitte on Sept. 7, they had to wait for the floodwaters to recede. The team normally partners with local congregations in need, but it was Kerner and his father, state representative Tim Kerner Sr., who asked the team to come serve their community.

Over 1,000 people from the surrounding communities signed up to receive aid. Disaster coordinators busied themselves with organizing meals and doing the laundry for first responders out of a mobile trailer, but their focus shifted with the impending threat from another storm, Tropical Depression Nicholas. The hours before that storm’s arrival were spent tarping damaged roofs to prevent further damage.

Nevertheless, the tropical depression brought rising waters back into the town.

“It is a muddy mess right now because after (Nicholas) came through, it kind of ended anything that had been done after Hurricane Ida,” said Laura Cremeans, director and co-founder of the Churches of Christ Disaster Response Team. 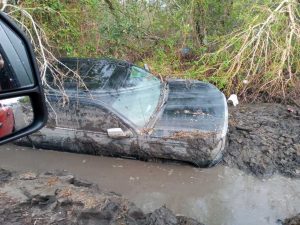 A vehicle near Jean Lafitte is submerged in mud.

With the drainage system still compromised by mud blockage from Ida, Kerner said public officials were concerned about future flooding.

“We’re still getting some rain, and it’s showing our vulnerabilities right now,” Kerner said. “We can’t take much more.” 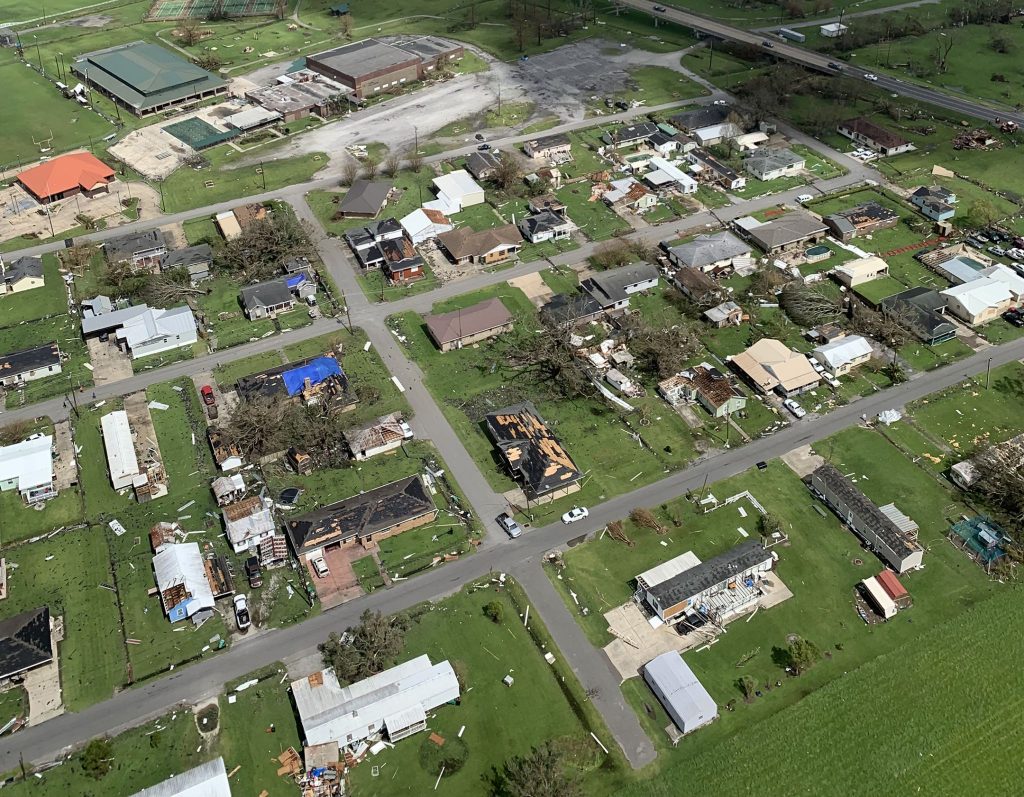