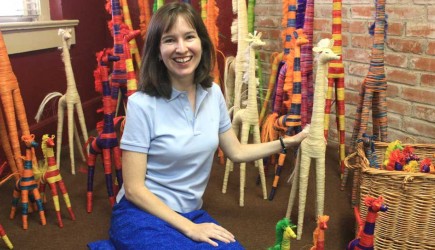 Erik Tryggestad
ABILENE, Texas — Before she began her new job, Dr. Ellen Little acknowledged, she “had to figure out how to be American again.”
Last July, after eight years as a medical missionary in Uganda, she became campus physician for Abilene Christian University.
In Africa, “I treated people who provided reimbursement in the form of avocados, eggs, occasionally live poultry,” she said. “It is a different world here.”
But it was here, on the plains of West Texas, where she first was inspired to consider serving God in Africa. Little grew up at the Hillcrest Church of Christ, near ACU’s campus, hearing reports from missionaries in South Africa. In high school she and her sister, Alicia, decided to be missionaries. Alicia married Jay Walls and served for seven years in Italy.
Ellen Little, meanwhile, got involved in medical missions. As a student at ACU, she traveled to Guatemala as an apprentice in the Medical Evangelism Training program, sponsored by Health Talents International.
Living in primitive conditions didn’t bother her, said Marie Agee, the program’s director.
“Very youthful … with hair down to her waist, she did not look like your typical missionary,” Agee said. “But Ellen’s heart was there.”
On her first day of medical school at Texas Tech, Little met Lisa Dunham, who also trained in the Health Talents program. Little was at the top of their class, Dunham said, and later was one of the best pediatric residents at the University Medical Center in Lubbock.
“But I think the thing that impresses me the most is that she decided to serve in Uganda as a general physician … rather than pursue seemingly loftier career opportunities like a sub-specialist or an academician,” said Dunham, who also became a medical missionary, living in Guatemala and working for Health Talents.
Agee described Little as someone “who knew what she wanted to do with her life and single-mindedly set about preparing herself for it.”
“She is living proof that, when God gives you a vision, watch out,” Agee said.
SINGLE, FEMALE, MISSIONARY
During her residency, Little traveled to Uganda and was recruited to join a mission team there in 2001. The Hillcrest church sponsored her work.
In Uganda, she treated patients and gave talks on abstinence and other health issues to teens.
“Some things I treated were ordinary … colds and viruses, high blood pressure, asthma,” she said. Other maladies were common to Africa — malaria and illnesses caused by parasites. AIDS was common, though Uganda is thought to have lower infection rates than its African neighbors.
Little also treated victims of torture — refugees from conflicts in Uganda, Sudan and other locales. Many suffered from severe physical, mental and spiritual wounds.
“Those were the ones I was least prepared to see,” she said, “and those were the days when I just felt like … crawling home because it was so hard.”
But she persevered, despite the hardships and despite being a single female in Uganda’s rigid social hierarchy.
“I got extra points for being a doctor, points taken away for being female and more points taken away for being a female that has never produced,” she said. “That’s a big, big deal, having a baby — more so than being married.”
But her unique status gave her chances “to learn from Ugandans things that they would not be willing to tell a 60-year-old white man with gray hair,” she said.
Little worked with Ugandan church leaders, including Isaac Sanyu, who described her as a gifted physician and Bible teacher.
“Dr. Ellen was very instrumental during my mom’s battle with cancer,” Sanyu said. She bought drugs the minister couldn’t afford and tried to make his mother comfortable.
One day, “Ellen asked my mom what else she could do for her,” Sanyu said. “My mom replied, ‘I want to be baptized.’ Immediately Ellen drove her up to the church building.”
A few weeks later, Sanyu’s mother died. Little helped the minister make the 10-hour drive to his mother’s village, where she was buried.
“Such is the kind of gift Dr. Ellen was — and continues to be — to all of us,” Sanyu said.
WHERE TO NEXT?
Little lost her own father in October 2008 and came home to be with her family. She hasn’t made any five- or 10-year plans but believes that, in her life, God has opened doors to foreign fields — and may do so again.
“I’d love it if I end up going somewhere else,” she said. “It might be Africa. It might be China. It might be Afghanistan. It might be Brazil. Who knows?”
In her role as ACU’s campus physician, Little “is proving to be a wonderful catalyst for holistic missions,” said Larry Henderson, the university’s missionary coordinator for Asia.
“Students appreciate hearing what God did through Ellen in Uganda and are motivated to be more available for his work in their own lives,” Henderson said.
She enjoys talking about the Christians she encountered in Africa. Though American churches understand some spiritual truths that Africans struggle to grasp, “there are other ways in which African churches have grasped spiritual truths that American churches have not,” she said.
“My hope and prayer would be that we can learn from each other and grow,” she added. “The more we are able to relate to each other — and believe me, that is so much more difficult than it seems to be on the surface — the better we’ll be. The more we’ll be Christ’s body. The more we’ll be a kingdom.”