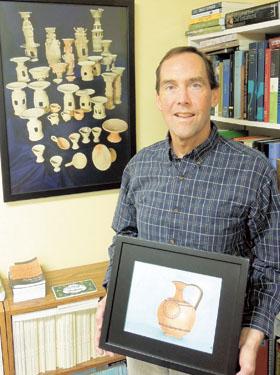 Craig Bowman stands next to a poster featuring incense burners unearthed during excavation at Tamar, Israel. He holds an artist’s reconstruction of a vessel from a shard of pottery. (Photo via www.theoaklandpress.com)

Craig Bowman really digs Israel.
The professor of Old Testament at Rochester College, an institution in Rochester Hills, Mich., associated with Churches of Christ, hopes to return to the Middle Eastern nation with students, where they will study an archaeological site near the Dead Sea.
The Oakland Press reports:

Five years ago when Craig Bowman last visited Israel he could never have guessed what it would take to get there again.
A professor of the Old Testament at Rochester College, Bowman expected to return to Israel in 2010 with students to continue working on an important archeological dig. Instead, he went on a harrowing personal journey to stay alive. Now back to work after 18 months off, he is hoping to raise the money needed to take students abroad next year.
A California native who earned a Ph. D. from Princeton Theological Seminary, Bowman has taught at RC since 2000. In 1998 he was diagnosed with a blood disorder. A self-described extreme athlete, he refused treatment. “At the time it wasn’t bugging me so I thought, ‘Why think about it?’ ” he said. Then in 2007, a mini-stroke forced him into treatment.