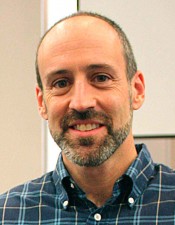 Africans encouraged to be ‘just Christians’

Erik Tryggestad
The small town of Banko in the West African nation of Guinea has about 5,000 people — and eight mosques.
Tall minarets rise among the small houses and round huts of the town, which has never had a church of any kind, said Barry Baggott, a former missionary to the neighboring country of Ivory Coast. About 85 percent of Guinea’s 10.8 million souls claim Islam as their faith, according to “The World Factbook” compiled by the CIA.
Baggott oversees French World Outreach, a Nashville, Tenn.-based ministry that produces French gospel literature. He traveled to Guinea to meet with Churches of Christ there. While serving in Ivory Coast, Baggott worked with a school of preaching and made visits to Guinea.
A graduate of the school, Etienne Saa, preaches for a Church of Christ in the city of Dabola, Guinea. He took Baggott to the town of Banko and introduced him to a small group of non-Muslims. Together, they studied the Bible.
“They are primary school teachers and other civil servants who are not originally from Banko,” Baggott said. “Some are Catholics. Some are Pentecostals. Some are Protestants.”
Surrounded by Muslims, the group put aside religious differences to “present a unified front in order to get concessions from local authorities — concessions such as the right to meet somewhere for worship,” Baggott said.
“Etienne … encouraged them to base their unity on following the Bible alone and being just Christians,” Baggott said. “He and other brothers returned to Banko after my visit there. Fifteen people put on Christ in baptism, including the leaders with whom I studied and their wives.” The group now refers to itself as “a church of Christ,” he added.
WEBSITE: frenchworldoutreach.org