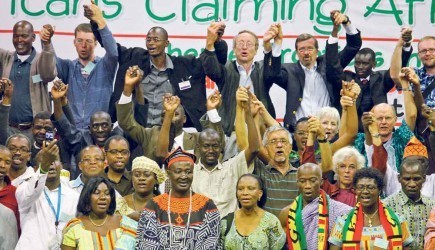 African Christians look beyond their borders

Erik Tryggestad
NEW FRONTIERS, including urban ministry and unreached nations, discussed at Africans Claiming Africa for Christ.
LUSAKA, Zambia – Africa is big. China, the United States, India, Europe and Japan could fit within its 11.6 million square miles. In the past three years, Africa’s population surpassed 1 billion, researchers estimate.
Nevertheless, the Christians who call this continent home have their sights set on something bigger.
Standing at the podium during the sixth Africans Claiming Africa for Christ conference, Dennis Malepa suggested that the 20-year-old event was overdue for a name change.
“It has to be ‘Christians Claiming the Whole World for Christ,’” said Malepa, a longtime minister in Gaborone, Botswana. “We are not African Christians. We are Christians. Our mission is a global mission.”
(RELATED BLOG POST: Africans Claiming Africa — Tracking 20 years of missions)
About 200 Christians, representing 20 African nations and the U.S., gathered in Zambia’s capital city for the conference, which occurs every four years, moving among the nations of Africa’s south, east and west.
The conference was designed as a “passing of the torch” from U.S. missionaries to African church leaders, said Rabson Mhango, a member of the Chilenje Church of Christ in Lusaka and coordinator of this year’s conference. Since 1992, African Christians have launched works in countries including Togo, Senegal, Gambia, Equatorial Guinea and, most recently, South Sudan. Africans who leave their home continent to work abroad have established churches of expatriates in Europe, Australia and the U.S.
The conference is “a very good platform to share ministry works between Americans and Africans,” Mhango said. “It is good that we should partner in the mission work.”
The conference explored “New Frontiers in Missions,” including urban ministry. Speakers including Malepa urged attendees to practice the ministries of evangelism, benevolence and encouragement as they move from rural settings, where Churches of Christ have flourished, to Africa’s growing cities, where many congregations struggle to grow.
An attendee from Nigeria voiced his frustration at reaching lost souls in the big city where he lives — where nearly 50 different languages are spoken. Malepa suggested small-group ministry and cell churches to reach multiple language groups.
Sam Shewmaker, director for Africa Missions for Texas-based Missions Resource Network, gave a keynote address on the closing day of the conference.
“My birth certificate tells me that I am an African, my passport tells me that I am an American, but my Bible tells me that my citizenship is in heaven,” he said. “I choose to believe my Bible.”
Shewmaker, born in Zambia to missionary parents, served as a worker in Africa for 29 years. Believers should use more than a map when planning mission work, he said.
“We need to deepen our understanding of God’s purpose in redemption,” Shewmaker said. He called the attendees to practice “deep prayer and fasting” as they prepare for mission.
As Africans move beyond the borders of their continent, “let us encourage them not to go simply as evacuees from poverty or political oppression … but as people intentionally prepared and prayerfully sent to courageously take the good news of Christ wherever they go.”