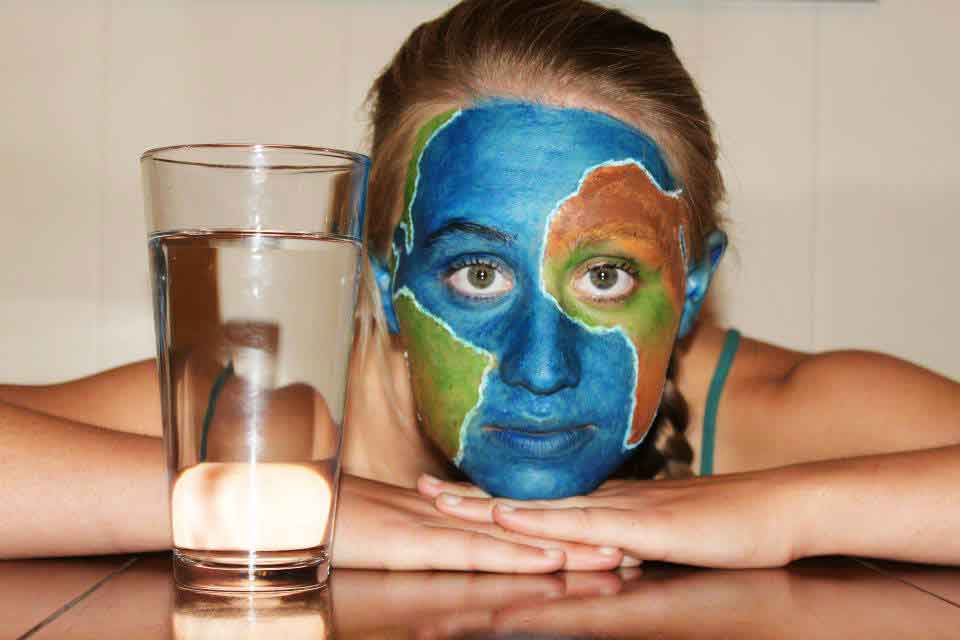 Anabel Reid in a photo submitted to a scholarship competition before her death in November 2011. (Photo via water4.org)

When asked what she wanted to do with her life, Anabel Reid answered with a photo.
The 19-year-old student at Abilene Christian University submitted a picture of herself — next to a glass of clear water, with her face painted to resemble a globe — as part of a video project for a scholarship application.
“She wanted to show that she planned to bring clean drinking water and the joy of the living water of Jesus Christ to the world,” her friends said in a description of the photo on Facebook.
On Nov. 4, Reid died near Ballinger, Texas, about 85 miles south of Abilene. She was part of a 16-person mission team on a bus en route to an annual service project at the Medina Children’s Home in Texas. The driver lost control and struck a concrete culvert. (See our report on the crash.) 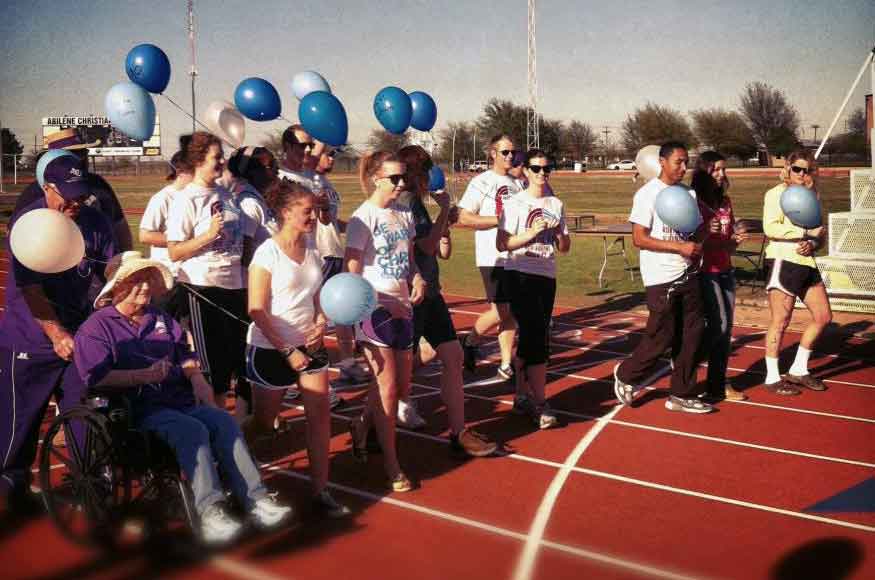 Survivors of the 2011 bus crash that claimed Anabel Reid’s life prepare for the first lap of the Run for Water. (Photo via facebook.com)

Four months after Reid’s death, her friends and classmates are doing what they can to fulfill her dream.
The ACU community hosted the first Anabel Reid Run for Water on March 23 and 24 at Elmer Gray Stadium on the university’s campus. Numbers are tentative, but university spokesman Grant Rampey said that runners and walkers logged more than 2,000 miles during the 24-hour event and raised more than $15,000.
“Those funds mean more than 150 water wells will be built in Anabel’s name to help Tanzanians who might not otherwise have access to drinking water,” Rampey said. “Much of the credit for planning and executing this weekend’s event goes to Mandy Scudder, in our agricultural and environmental sciences department, and to Anabel’s boyfriend Alex Wann. As Mandy says, ‘May God be praised and glorified.'”
It’s not too late to contribute to the effort. Those interested can make a donation to the Anabel Reid Memorial Fund through the Water4 Foundation. The Oklahoma City-based foundation helps Christian groups drill water wells around the globe — and teaches people to drill their own wells.
Reid first crossed paths with Water4 at the 2010 World Mission Workshop at Harding University Tahkodah, a sort of “missionary boot camp” in Floral, Ark. (See our story from 2010 about the hands-on workshop.) There, she met Water4’s Caleb Holsey, who demonstrated the well-drilling technique in the Arkansas soil. Holsey is a member of the Memorial Road Church of Christ in Oklahoma City. (Coincidentally, he also was my ride home from the workshop.)
Reid and Wann visited Water4’s offices in Oklahoma City less than two months before the bus wreck.
On the event’s website, friends of Reid describe her dedication and faith: 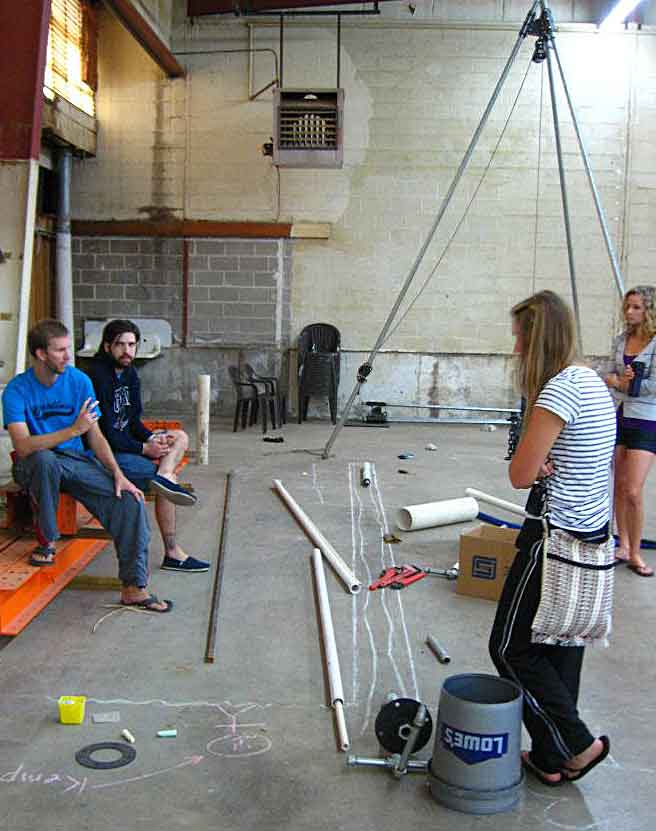 Caleb Holsey, left, explains the drilling rig he and his coworkers use as Anabel Reid, right, observes at Water4’s headquarters in Oklahoma City. (Photo via facebook.com)

Anabel Reid deeply loved the Lord and His people. It was near the age of 13 on a church backpacking trip in the beauty of the Colorado wilderness where God planted the seed of clean drinking water work in her heart. During a 24hr. solo time without food or water she began to think of the people all across the world who were just as thirsty as she, and had been so their entire lives. She said, “If God hadn’t placed that on my heart, I am sure that all I would have been thinking about was how I was going to sneak down to the river to pump a clean bottle of water before someone saw me! But He did, and I think it really stuck!”
It stuck indeed as her God-given passion remained and grew, leading Anabel to pursue an Environmental Science degree at Abilene Christian University, working to raise the tuition money herself, to be further equipped in this pursuit. She was making strong progress towards her goal of serving God in this way, while also being passionate and focused to see God’s joy and purpose for each day.
It is now our strong desire to carry the baton she has passed off. To make a real and lasting impact in the lives of those who thirst in this world for clean drinking water and who thirst for the life, hope and joy of relationship with Jesus Christ, the Living Water.