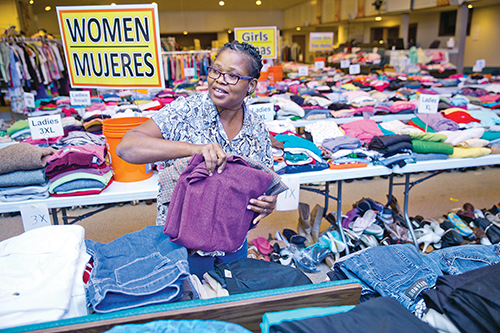 Across the Nation, September 2015

Staff Reports
HAWAII
HONOLULU — The Church of Christ at Pearl Harbor has passed the $900,000 mark in its effort to raise $1.3 million needed to secure the land it has leased from the U.S. Navy since 1956.

Eight months before the Navy’s purchase deadline, the “A Pearl for a Great Price” campaign has been blessed by generous contributions from Christians across the U.S., minister and elder Steve Byrne said.

The 150-member congregation consists of 80 percent military personnel and their families who themselves have contributed almost half of the funds raised. Recently, “challenge coins” were sent out to all contributors as tokens of appreciation and “prayer reminders” for the the effort. For more information, see cocph.org.

Four families — a total of 16 people — spent two weeks serving the 41st Street Church of Christ in Sioux Falls, the Northern Hills Church of Christ in Spearfish and Black Hills Bible Camp, south of Deadwood. The short-term missionaries also looked into possible work for next summer at the Pine Ridge reservation.

“Family mission trip means there is something to do whether you are 8 or 80,” Telgren said, “and we all enjoyed getting to know each other and each other’s children better. We hope to have a few more churches partner with us next year.”
TENNESSEE
LAWRENCEBURG — The Pulaski Street Church of Christ, in partnership with the Christian Student Center at the University of North Alabama, is helping to improve the lives of thousands of children in Haiti.

A peanut butter drive coordinated by students collected 8,700 jars of peanut butter — 25 percent of them coming through the church.
The peanut butter is being donated to LiveBeyond, a Christian humanitarian aid organization, and will feed an estimated 150,000 malnourished children in the Western Hemisphere’s poorest country.

“A jar of peanut butter may not seem like much in the U.S., but in Haiti, it can mean the difference between life and death,” said David Vanderpool, Live Beyond’s founder.
WISCONSIN
MILWAUKEE — The multiethnic Northtown Church of Christ conducted a recent series of four roundtable discussions focused on racism and racial reconciliation.

The discussions — open to the community — focused on how the church can make a positive impact in those areas, minister Alex Clayton and member Evan Bane said.

An average of 60 people attended each session. Organizers said the discussions produced positive results as the church endeavors to:
• “Educate one another on the definitions of racism.”
• “Show compassion for the ignorance of the majority when it comes to racism.”
• “Learn how racism is not an excuse for not living as a disciple.”