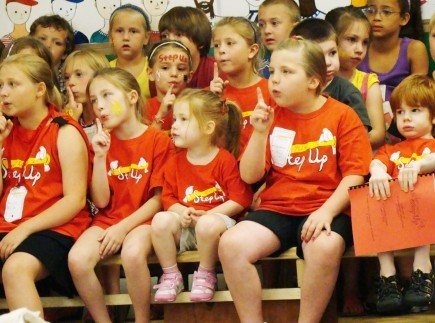 Across the Nation, September 2011

ARKANSAS JONESBORO — A video on the Southwest Church of Christ’s website aims to dispel a lot of the excuses people have for not coming to church.
“Church is for wimpy, girly men,” says one of the excuses offered on the video.
“You want to say that again?” a bulky man with a husky voice replies.
The video touts the congregation as a place with room for one more hypocrite.
PARAGOULD — The last time the Pine Knot Church of Christ canceled a Sunday worship service — for weather or otherwise?
Try never.
That’s saying something, considering that the congregation — described by its leaders as the oldest Church of Christ west of the Mississippi River — began meeting in 1841.
The Pine Knot church recently hosted its annual homecoming and celebrated 170 years of worship, the Paragould Daily Press reported. Bill Drake serves as pulpit minister.
MISSOURI MT. VERNON — Some people who rely on wheelchairs to get around are “absolutely prisoners in their own house” because they don’t have a ramp, Wade Atkeson says.
Atkeson, a member of the Mt. Vernon Church of Christ, offers freedom.
He coordinates a volunteer effort by church men to build wheelchair ramps for those who need them, the Lawrence County Record reported. “We were looking for something that the men could do together that would also help the community and those who really need it,” Atkeson told the Record.
Linda Gregersen, wife of minister David Gregersen, told The Christian Chronicle the effort has opened doors for evangelism.
OKLAHOMA
BROKEN ARROW — For the first time, a woman has earned a playing card on a men’s professional golf tour.
That woman: Isabelle Beisiegel, a member of the Broken Arrow Church of Christ.
The 32-year-old native of Montreal, Quebec, earned her spot in the Canadian Professional Golf Tour’s recent qualifying school.
Tim Pyles, the Broken Arrow church’s preaching minister, describes Beisiegel, who played collegiate golf at the University of Oklahoma, and her husband, Daniel, as “wonderful people.” Beisiegel, known as “Izzy,” credits God for her accolades. IDABEL — “Sound preaching and hard work still pay off,” says J.J. Hendrix, preacher for the Lynn Lane Church of Christ. Hendrix reports 11 baptisms and four restorations so far in 2011. Members are “just working hard to reach out and study.”
OREGON EUGENE — The Eugene Church of Christ provides emergency clothing and personal items to children removed from their homes by state protective services.
Started in 1995, the ministry is called “Kare-n-Bear.” The name derives from the handsewn stuffed bears included in kits that also contain pajamas, socks, underwear or diapers, combs, shampoo, toothbrushes, toothpaste and other items.
TENNESSEE     KNOXVILLE — A standing-room-only crowd packed the Laurel Church of Christ as loved ones paid tribute to an Army National Guard pilot killed in a Tennessee helicopter crash July 9.
Chief Warrant Officer 4 Daniel Cole, 41, was laid to rest July 15 at Tennessee Veterans Cemetery.
He and 1st Lt. Thomas Joseph Williams Jr., 26, were killed when their chopper went down near Exit 141 on Interstate 75.
Cole, a married father of two, was a member of the West End Church of Christ in Knoxville and attended Freed-Hardeman University in Henderson, Tenn.
The crash’s cause is under investigation.
NASHVILLE — Minister Jim Olive and his wife, Beth, have served the Jackson Park Church of Christ for 40 years.
The congregation marked the milestone with a recent monthlong series of events, concluding with a celebration dinner.
Church elders plan to establish an endowed scholarship in the couple’s honor at Lipscomb University.
Jim Olive began work with the congregation as educational director in 1971. When preacher Joe Sanders retired the following year, Olive assumed the pulpit minister duties.
TEXAS BURLESON — Construction is progressing on a new, $6.2 million building for the Burleson Church of Christ.
The 51,000-square-foot facility will feature a 1,373-seat auditorium as well as classroom and fellowship space.
More than 40 years old, the current building has reached capacity, crowding classrooms and the parking lot.
Average Sunday attendance tops 850.
“We see this new building as more than concrete and pews,” said Don Kuhn, children’s minister of 35 years. “Our vision through the entire project is to use this building for activities and ministries that would connect the community with Jesus.”
WEST VIRGINIA PARKERSBURG — About 450 students and other volunteers traveled throughout the valley to paint homes for needy residents.
Sponsored by Churches of Christ, the recent 13th annual Mid-Ohio Work Camp brought together teenagers focused on helping residents who could not do the work themselves.