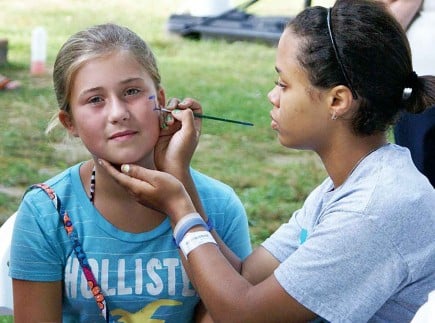 Across the Nation, October 2012

STAFF REPORTS
COLORADO
COLORADO SPRINGS — The Eastside Church of Christ provides rides and support for Air Force Academy cadets.
Eastside leaders encourage parents of cadets to make them aware of the church’s ministry.
For more information, see the church website at www.eastsidechurch.us.
ILLINOIS
CHICAGO — A group of Christians gathered recently to kick off the biennial Crusade for Christ evangelistic campaign.
More than 500 members of Churches of Christ attended the one-day event that focused on informing members about the upcoming crusade. The campaign will be June 23-27, 2013, in Montgomery, Ala. The last crusade occurred in Washington, D.C., in 2011.
Pledges and donations also were collected at dual seminars at the Sheldon Heights Church of Christ and the Chatham-Avalon Church of Christ.
The seminars raised more than $42,000, organizers said. Those funds will be used to promote the event through various forms of advertising and to keep costs as low as possible for those who want to attend the crusade.
WAUKEGAN — For seven years, Fernando Diaz has served as minister for a Spanish-speaking Church of Christ in Waukegan. The church shares a building with English-speaking brothers and sisters and has about 50 members.
Diaz receives support from his local congregation as well as the Southside Church of Christ in Milwaukee and the Mabelvale Church of Christ in Arkansas. However, he does not make enough to support his family, said Jim Frost, an elder for the Elkhorn Church of Christ in Wisconsin.
“I can attest that Fernando is qualified and full of zeal for our Lord,” Frost said. “Spanish-speaking congregations provide fertile grounds of growth for Churches of Christ in the North or anywhere.” For more information, call Frost at (312) 420-0859.
MAINE
CARIBOU — For the first time since the mid-1990s, the Caribou Church of Christ has appointed elders.
Keith Book, Dave Craw and Cliff Foster were installed recently as shepherds for the 32-member congregation.
Two weeks later, the church conducted its first Vacation Bible School in more than a decade, minister John Repecko said.
“God continues to bless us and surprise us,” Repecko said.
MISSOURI
ROLLA — Two Churches of Christ have merged into one to better serve God and the community, the Rolla Daily News reported.
The merger occurred between the Highway E Church of Christ and the Highway 63 South Church of Christ.
“We want to be a united body of Christ here in Rolla,” Andy Cassidy, an elder for the newly named Rolla Church of Christ, told the newspaper. “(We want) to show the love of Christ in the community through that unity, to show that Christ’s love overcomes any adversity.”
PENNSYLVANIA CAMP HILL — Many nursing home residents never receive a visit from anyone.
The Camp Hill Church of Christ does its part to remedy that.
Through its Golden Living Ministry, the church works to improve the lives of residents of a nursing home near its building. The church adopted 50 of the home’s most forgotten residents, resulting in hundreds of personal visits per month, minister Doug Hamilton said.
“We even carried out a makeover of the Alzheimer’s patio that included stump-pulling, concreting, construction of an arbor, planting and even (building) a fountain,” Hamilton said.
“There will soon be a live-streamed worship service to the recreation hall every Sunday morning that will allow dozens of residents the opportunity to join the Camp Hill family in worship.”
SOUTH CAROLINA
CLOVER — Members of Churches of Christ in Rock Hill and Fort Mill are planting a new church in Clover — one they hope will grow and flourish.
“We’re just excited to get started at this point,” Greg Wanderman, minister of a 60-member congregation that meets in an elementary school, told the Lake Wylie Pilot. “We want to serve the community — to preach the Word and save souls.”
The Clover church recently broke ground on a 5,000-square-foot church building on about five acres.
Jim Hood, an elder with the new church, told the newspaper that the support of individuals and other area Churches of Christ made the land purchase and construction possible.
“This was a planned church planting,” Hood said. “We hope it will grow.”