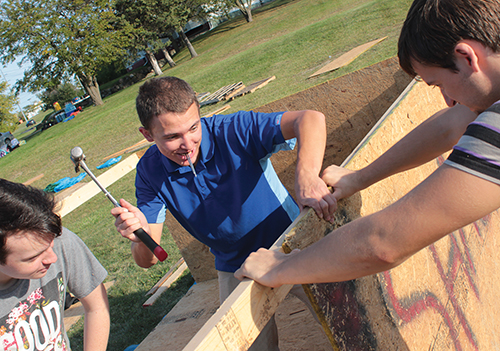 Across the Nation, November 2015

Staff Reports
ARIZONA
PHOENIX — A group of 13 from an Oklahoma church, joined by a dozen students from Bear Valley Bible Institute in Denver, worked with the Salt River Church of Christ to conduct a recent mission campaign.

“We knocked doors, conducted Bible studies and visitation and (did) service projects,” said Robert Prater, minister for the Crosstown Church of Christ in Tulsa, Okla. Prater taught a nightly seminar on marriage and family. Attendance averaged about 50.
MISSISSIPPI
PONTOTOC — Thirteen people were baptized and one restored during the recent ninth annual “Back to the Bible” campaign organized by the Cox Boulevard Church of Christ in Sheffield, Ala.

Nearly 100 Christians from five states knocked 6,600 doors in the campaign hosted by the Highway 15 Church of Christ in Pontotoc, organizers said.
TENNESSEE
CENTERVILLE — Two dozen area congregations celebrated a day of “Endeavor” through a recent joint gathering for worship.

About 850 members of Churches of Christ assembled in the Hickman High School auditorium on a Sunday afternoon.

“The day was themed ‘Endeavor’ and carried a tone of peace and hope for a broken world,” said Bryan McAlister, minister for the Centerville Church of Christ. The theme Scripture was Ephesians 4:3: “Endeavoring to keep the unity of the Spirit in the bond of peace.”
TEXAS
SNYDER — The East Side Church of Christ decided to take hospitality and outreach seriously this fall, minister Jeff Dunn said.

During October, the congregation focused on showing random acts of kindness to its community. Leaders dubbed the effort “RAKtober.” Next, through an initiative called “T-500,” the church plans to provide free Thanksgiving meals to 500 families.

“God has called this body to love unconditionally and to spread the hope of Jesus throughout this town,” Dunn said. “We are excited and hopeful about the amazing things he is doing here in West Texas.”
VERMONT
SPRINGFIELD — The Springfield Church of Christ hosts a community dinner on the last Tuesday night of every month.

“We have been doing this for seven years now,” minister Jay Huntley said. “It has tremendously increased our rapport with Springfield.”

While the primary desire is to feed those who truly need the meal, Huntley said, it’s also a chance for members to bring friends they are trying to influence.

The most recent monthly meal drew 95 people, the largest attendance so far. About 20 of those were Springfield church members.