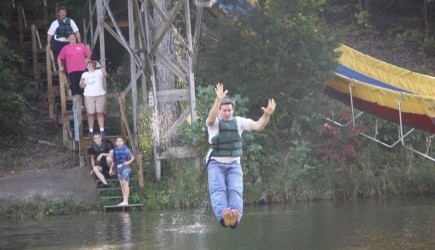 Across the Nation, November 2012

STAFF REPORTS
ARKANSAS
TEXARKANA — Two congregations on opposite sides of the state line have merged “so that a greater work can be done in the city of Texarkana for the Lord,” minister Milton Hopkins Sr. said.
Joining together are the Bowie Street Church of Christ in Texarkana, Texas, and the College Hill Church of Christ in Texarkana, Ark.
Hopkins, formerly minister for the College Hill church, will remain in that role for the Twin City Church of Christ, on the Arkansas side of the line. Johnnie McGhee Jr., formerly minister for the Bowie Street church, will be minister emeritus.
The new congregation’s Sunday attendance is about 150.

MAINE
AUGUSTA — Twenty-one college students and young professionals from the Highland Heights Church of Christ in Smyrna, Tenn., recently descended on Maine to help the state’s congregations.
The mission group, led by deacon Zack Bannister, served the Augusta, Greater Portland, Sabattus and South Paris congregations.
“Doing church building repairs, cleaning, indoor and outdoor work and any project asked of them with a positive attitude overwhelmingly encouraged our congregations,” said Brenda Birckholtz, a member of the South Paris Church of Christ.
OKLAHOMA
LUTHER — When recent wildfires burned thousands of acres and destroyed more than 50 homes and other structures east of Oklahoma City, the Luther Community Service Center jumped into action.
The social services ministry — which is associated with Churches of Christ — worked in cooperation with local congregations and Nashville, Tenn.-based Churches of Christ Disaster Relief Effort Inc.
“The outpouring of support for the fire victims … was awe-inspiring,” said Tami McDaniels, board secretary for the Luther Community Service Center.
Donations were packed into five storage buildings throughout town and spread across the service center’s parking lot, McDaniels said.
Victims received food, cleaning supplies, water, linens, clothing and money.
TENNESSEE
NASHVILLE — Green Street Church of Christ has been on a mission to help Nashville’s homeless, but now the church says that mission is under fire.
The city’s codes department cited the church for having tents on the property where the homeless sleep, saying the zoning does not allow camping, The Tennessean reported.
The church vows to fight the citation in court.
“It is the position of the church that they’re protected under federal statute and under the Constitution of the United States,” attorney William “Tripp” Hunt told the newspaper.
UTAH
SALT LAKE CITY — With the theme “Colored Like Christ,” based on Galatians 3:26-29, a recent youth rally organized by the Southside Church of Christ and the Murray Park Church of Christ drew 86 participants from Utah, Idaho and New Mexico.
Teens representing 10 congregations wore tie-dyed T-shirts and helped with various service projects, said Dwight Denman, youth minister for the Southside church.
“The group discussed the different ‘colors’ we paint ourselves,” Denman said. “Instead of being colored like Christ, we often paint ourselves with profanity, apathy, gossip, anger, greed and lies.”