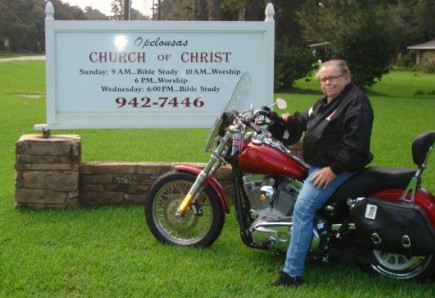 Across the nation, November 2009

Staff
OPELOUSAS, La. — “Let’s ride!”
So declared Clarence Holmes, new evangelist at the Opelousas church, in introducing himself to the community. Holmes, a minister for 32 years, pointed out that he enjoys riding a Harley-Davidson motorcycle.
“I would like to invite you to come and worship with the Opelousas Church of Christ,” he said in a news release. “You don’t have to ride a motorcycle, but if you do, that’s OK. Please come and visit us where Christ the Lord is preached in simple truth.”
ARIZONA SURPRISE — The West Bell Road church, which began in 1989, has a new home after meeting first in a school building and later in a business mall suite.
The church bought an old Assembly of God building that will seat up to 300 and has adequate classrooms, offices and parking, minister John Waddey said.
The purchase marks the culmination of 10 years of fundraising and hard work, Waddey said.

CALIFORNIA ESCONDIDO — The North County church has added a third Sunday morning service in English to accommodate growth. The congregation also has a Spanish assembly.
Total attendance has grown about 20 percent in the last year, topping 800, minister Tim Spivey said.

GEORGIA ATLANTA — The West End church recently offered a $1,000 reward for information in the case of a homeless woman shot to death in front of the church.
Church member Tony Bennett said he spent three years building a friendship with Jeannette Smith, 66, who slept in a tent outside the church.
“Two weeks ago, I said, ‘Jeannette, it’s dangerous out here. It’s cold. You don’t want to be out here,’” Bennett told 11Alive news channel. But she stayed there and became a victim.
Church secretary Gayron Johnson told the Atlanta Journal-Constitution: “She didn’t feel comfortable in shelters because she said the people were mean to her. she was a gentle soul. It breaks my heart. We just really want justice.”

ILLINOIS CHICAGO — The Sheldon Heights church became a hub for community grieving and discussion after the recent beating death of a 16-year-old boy named Derrion Albert made national headlines.
About 200 concerned residents met at the church building after the slaying.
Civil rights leader Jesse Jackson spoke outside the church building, declaring, “This is a war zone.”

NEBRASKA OMAHA — Georgia native James L. Tinsley Sr. obeyed the gospel at 16 after hearing Marshall Keeble preach. Tinsley then attended the Nashville Christian Institute and Southwestern Christian College.
In 1959, Tinsley was hired as the minister of the Pratt Street Church of Christ in Omaha, which grew and became what is now the Fort Street church.
After 50 years as the congregation’s minister, he plans to retire. Members will honor him with a retirement celebration banquet set for 6 p.m. Dec. 12. For more information, call (402) 453-4649.

NEW HAMPSHIRE MANCHESTER — The Manchester church recently sponsored a “Give Away Day” for its community, minister Park Linscomb said.
“We had a whole tractor-trailer full of used but still usable items — soup to nuts, clothes to appliances, toys, games, et cetera — to give away to the less affluent section of town,” Linscomb said.
The church helped 185 families.

NEW YORK NEW YORK — The Manhattan church’s recent 16th annual congregational retreat drew about 125 children and adults. They enjoyed fellowship, recreation and Bible study in the rural rolling foothills of the Catskill Mountains, north of New York City, elder Dave Swearingen said.
OREGON SALEM — A long-vacant church building has a new facade, a new roof and new siding. But it’s the changes inside that have the community excited, the Statesman Journal reported.
The old building is the new home of the Cascade Hills Church of Christ, a 4-year-old church plant by minister Jason Campbell and his wife, Melissa.
“We want to be a church where people can feel comfortable and safe asking the tough questions about God and about life,” Jason Campbell told the newspaper.
About 85 people attended the grand opening service in the renovated building, said Stan Granberg, executive director of Kairos church-planting ministry.

WYOMING LANDER — Matthew Johnson, 16, is an active member of the Lander church, serving on the Lord’s Table, leading prayers and learning to be a song leader.
He’s also the new lodge president for the Central Wyoming Council of the Order of the Arrow, the national honor society of the Boy Scouts of America.
“We are all very proud of his willingness to serve,” said his father, Paul Johnson.