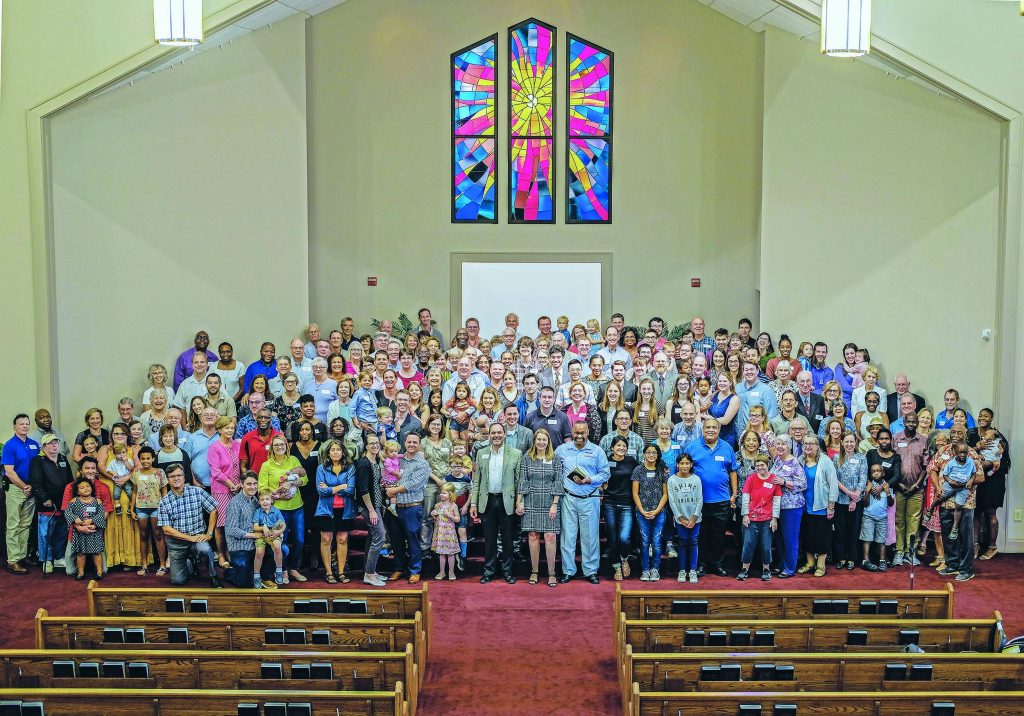 Our Journey by Grace through Faith’: N.C. church celebrates 75 years: Current and former members of the Cole Mill Road Church of Christ in Durham, N.C., gather for a photo as the congregation recently celebrated its 75th anniversary.

“Our Journey by Grace through Faith” served as the theme as the church commemorated the occasion. 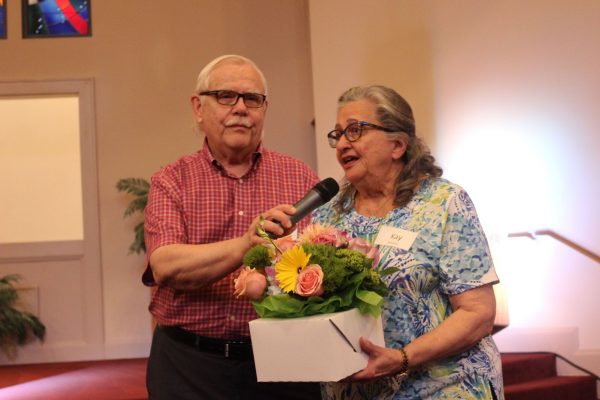 Paul and Kay Watson are honored during the 75th anniversary celebration.

The weekend’s events included a special celebration of the ministry of Paul and Kay Watson. Paul Watson, who earned his Ph.D. in Old Testament from Yale University, served as the senior minister at Cole Mill Road from 1983 to 2007.

Past and present song leaders led favorite hymns, and the keynote speakers were senior minister Ben Fike and Amanda Pittman, assistant professor of Bible at Abilene Christian University in Texas.

Young hearts and ancient words: The University Church of Christ in Abilene, Texas, presents each new kindergarten student with a Bible.

“This is an important milestone in their life, one we want them to realize Jesus must be a part of as they begin school,” children’s minister Jennifer Welch said. “I believe it also encourages the parents to recognize this next step in their job as being the spiritual leader of their child and encouraging a relationship with the Lord.” 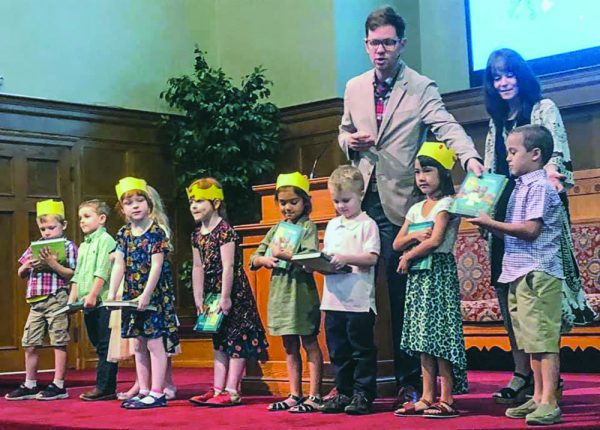 BENTON — The Northside Church of Christ marked the birthday of a special member on Sept. 22.

Syble Womack, known to her grandchildren as “Memaw,” turned 100 that Sunday.

Mayor Tom Farmer proclaimed it as “Syble Womack Day” in the city of 36,000. 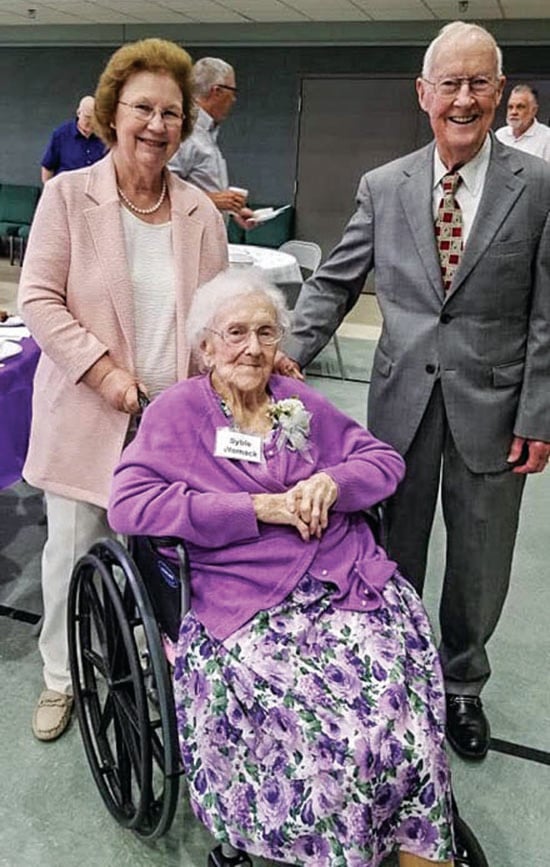 Syble Womack (Memaw), in wheelchair, with Joyce Smith and Jeff Davis at the Northside church.

COUNCIL BLUFFS — It could have been worse.

The entire auditorium ceiling of the McPherson Avenue Church of Christ collapsed on a recent Friday. A structural engineer identified a split 2-by-8, which caused a cascade effect.

“God’s hand of protection can be seen in so many areas, especially the fact that no one was in the building at the time of the collapse,” elder’s wife Lorna Seilstad said.

The church is meeting at a vacant store in a shopping mall during cleanup and damage assessment.

“As far as total damage, we are still not certain,” preacher Brian Deckman said. “There is no doubt we still have a large task before us, but we trust God will provide and lead us where we go from here.” 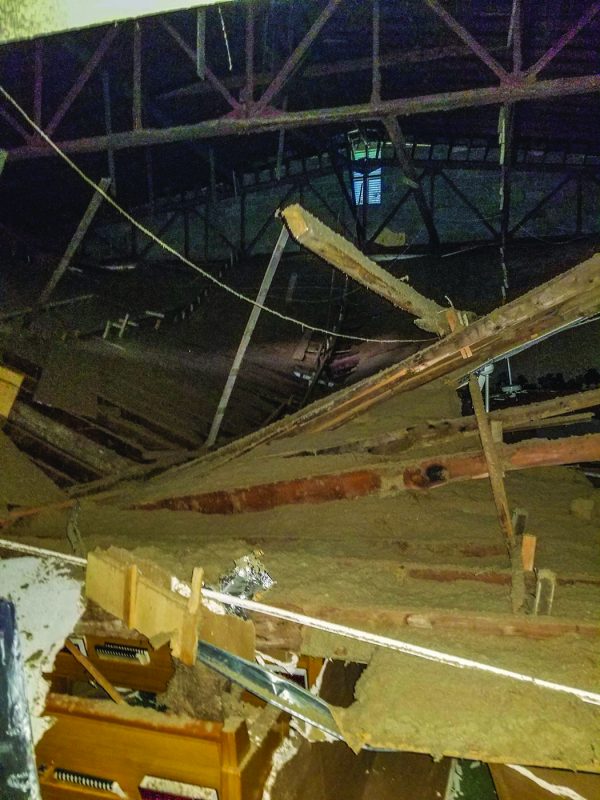 A view inside the McPherson Avenue church building after the roof collapse.

NEWARK — As elevated levels of lead in this city’s water supply caused a public health crisis, the Newark Church of Christ recently distributed hundreds of cases of bottled water to residents.

“Thank God for the dedicated brethren who picked up and set up this water for distribution,” minister Eugene Lawton wrote on Facebook.

THE NEWARK CHURCH OF CHRIST IS GETTING READY TO GIVE TO MEMBERS AND COMMUNITY 200 cases of bottled water, 40 bottles per…

Newark residents were urged to use bottled water for drinking, cooking and brushing their teeth after officials said city-provided filters may not have been effectively removing lead from the tap water, the Washington Post reported.

FORT WORTH — A new Wednesday night program of the West Freeway Church of Christ features a family-oriented time in a spiritual atmosphere, minister Britt Farmer said.

At 5:30 p.m., the church offers a meal for $10 per family, followed by a few minutes to help children with homework or just talk about the day.

Children’s Bible classes start at 6:15 p.m. and end by 6:55 p.m. Parents engage in a “Table Talk” experience during the class time.

“Our young family group has appreciated it the most,” Farmer said.

“If you are truly sorry, I know I can speak for myself: I forgive you. And I know if you go to God and ask him, he will forgive you.” — Brandt Jean, 18, in a victim impact statement to Amber Guyger, the fired Dallas police officer convicted of murdering his brother, Botham Jean. Read the full story.