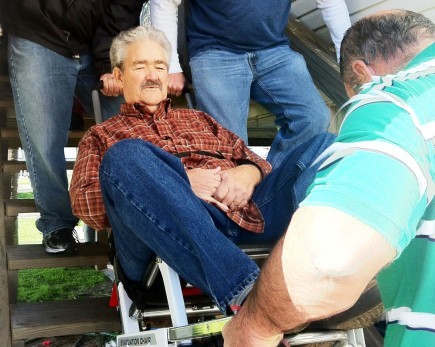 From Staff Reports
ALABAMA KILLEN — The soundtrack for the hit movie “The Hunger Games” features The Secret Sisters.
Bluegrass duo Laura and Lydia Rogers got their start singing a cappella in church and still can be found in the pews of the North Carolina Church of Christ.
Rolling Stone describes “Tomorrow Will Be Kinder,” the song included on the soundtrack, as a “haunting folk ballad.” To hear it, go to www.    christianchronicle.org/blog and search for “Secret Sisters.”
INDIANA PEKIN — A mobile feeding ministry associated with Churches of Christ has served thousands of meals to tornado victims and disaster relief volunteers in this southern Indiana community, organizers said.
Disaster Assistance CoC, sponsored by the Lake Jackson Church of Christ in Texas, set up its mobile headquarters at MJ Auto in Pekin — a business owned by a member of the Borden Church of Christ and located just a few minutes from a disaster area.
“We are cooking meals, delivering meals, handing out and delivering other miscellaneous supplies and have volunteers going out to do cleanup and repair,” said Mike Baumgartner, director of Disaster Assistance CoC. “Each meal that we hand out contains a flyer that lists several churches in the area that we are serving.”
The Big Spring Church of Christ in Pekin and the Northside Church of Christ in Jeffersonville, Ind., are assisting with the coordination.
For details on donating or volunteering, go to www.christianchronicle.org/blog and search for “mobile feeding ministry.”
SOUTH BEND — A Church of Christ minister will serve as the next dean of Yale Divinity School.
Gregory E. Sterling, dean of the Graduate School of the University of Notre Dame, will assume his new role
this summer. Like his father before him, Sterling preaches for Churches of Christ.
“I last served the Warsaw Church of Christ (in Indiana) for 16-and-a-half years as the minister,” Sterling said in an e-mail to The Christian Chronicle. “I stepped down as a result of my deanship here.”
KENTUCKY WEST LIBERTY — A tornado that ravaged this eastern Kentucky town caused major damage to a Church of Christ.
“Our congregation needs your prayers,” said Rusty Hutchinson, who leads singing for the 40-member West Liberty Church of Christ.
While the building’s walls remain standing, “the roof was damaged bad, and the inside was damaged bad,” Hutchinson said. The church’s insurance coverage on the building will not be enough to rebuild, he said. For now, the congregation meets in members’ homes.
“It devastated the town,” Hutchison said of the March 2 tornado, which claimed a half-dozen lives in West Liberty.
To help with the rebuilding effort, send checks to the West Liberty Church of Christ, Attn.: Danny Clark, Treasurer, 111 Oakwood Lane, West Liberty, KY 41472. For more information, call Clark at (606) 743-1158.
MISSOURI FESTUS — Members of the Twin City Church of Christ in this St. Louis suburb praised God for the quick thinking and cool composure of one of their own.
Pilot Michael Walden recently guided United Airlines’ Shuttle America flight 5124 from Atlanta to Newark, N.J., to a safe landing after the plane’s front landing gear failed to deploy, NBC News reported.
Walden and his family are active members of the Twin City church, minister Patrick Adam told The Christian Chronicle.
The minister described Walden as “an amazing Christian father and member of the Lord’s family.”
“His desire, apart from flying, has always been to be sold out for Christ,” Adam said. “And following this incident, God’s name has been invoked a number of times. God is amazing.”
For more details on the landing, go to www.christian chronicle.org/blog and search for “Michael Walden.”
TENNESSEE UNION CITY — Three years ago, the Exchange Street Church of Christ decided to reach beyond its walls to serve the unchurched, minister Dan Huggins said.
An outgrowth of that endeavor was the “Soul Food Cafe,” offered on the first Wednesday night of each month.
“We prepare a great meal, invite the community, have some type of activity such as karaoke, bingo, a band, blood drive, etc.,” Huggins said. “There are no strings attached, no Bible classes, just fellowship and creating relationships.”
As a result of those relationships, about 28 people have been added to the Lord’s family, the minister said.
“This has been such a blessing for us as a church family,” he said.
TEXAS WACO — The youth group from the Crestview Church of Christ  spent spring break serving victims of last year’s wildfires in Bastrop, Texas, about two hours south of Waco.
The church’s teens worked to clear bricks, ashes, metal and trash and helped with construction projects, youth minister Jack Whiddon said.
“We used chainsaws constantly,” Whiddon said. “We were blessed to be able to spend time with the Bastrop Church of Christ. They are a church reaching out to their community.”