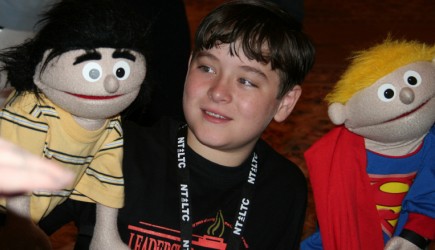 staff reports
Whit is my name, and my puppet’s name, too
Whit Chapman, 10, from the Forsythe Avenue church in Monroe, La., poses with “Whit,” his namesake puppet, and a superhero puppet who likes to rush in and say, “Here I am to save the day!” Whit joined a group of young people from the congregation who traveled to Dallas to participate in Leadership Training for Christ events recently. Whit, a fifth-grader, also competed with the congregation’s Bible Bowl team.
FLORIDA
SARASOTA — What do mothers of young children need? How about MOPS?
At the South Trail church, Judi Park helped found a MOPS chapter — the acronym stands for Mothers Of Pre-Schoolers — and leads about 25 young mothers who meet at the church. Child care is provided.
“We try to cover so many things that relate to mothers, from the serious to the very lighthearted,” Park told the Sarasota Herald-Tribune. She said the program emphasizes “lifestyle evangelism,” living in a Christian way without “pushing it in someone’s face.”
IDAHO
KIMBERLY — A former mortuary has become the home of a new church. The congregation of about 25 met for the first time recently, with Wayland McClellan serving as minister.
The building needed few immediate changes to make it work for the church, the Twin Falls Times-News reported. Members moved furniture, installed new compact fluorescent light bulbs to bring more light to the brick structure and added colorful cutouts to the walls of the children’s lesson rooms.
ILLINOIS
DECATUR — “Putting the G-O in Gospel,” proclaimed a recent headline in the Decatur Herald & Review.
The story focused on Joe Puckett, minister of the Morningside Chapel church, offering to make house calls — to study the Bible with anyone interested.
“I believe in getting Christianity back to being the center of the home,” Puckett told the newspaper.
LOUISIANA
MONROE — The Jackson Street church has taken over sponsorship of the annual Pan-American Lectureship.
The effort will enhance the church’s already heavy involvement in Latin America, which includes support of missionaries and two medical mission trips each year to Mexico, leaders said.
OKLAHOMA
YUKON — Students call it “church lunch,” the Friday feasts cooked just for them at the South Yukon church. Volunteers cook and serve the lunches each Friday to junior and senior high students who come to the church during their lunch break, The Oklahoman reported.
The lunches, which cost $2 and include a drink and dessert, began in 2001 as a way for the church to reach out to students, youth minister Josh Sloan said.
RHODE ISLAND
CUMBERLAND — The Blackstone Valley church has taken over ownership of its own building. Members marked the occasion April 12 with a “Celebration In-Deed,” minister Bruce Bates said.
“We challenged our church in special contributions last year,” Bates said. “And we hit the purchase amount in January.”
The congregation invited the community “to celebrate with us and for them to get to know what we are about and where we are heading,” the minister said.
TEXAS
FORT WORTH — The Stop Six church recently became the first church in Texas to open a “Go Center” — part of a statewide initiative to help teens who dream of attending college but may be held back by economic disadvantages.
Sixteen computers were donated to the church for student research about careers and financial aid, the Fort Worth Star-Telegram reported. Volunteers from the business and educational communities help students and their parents four days a week, organizers said. The 350-member church already had begun a program called Community Passport for Renewal — with the catchy “CPR” acronym — to tutor students, minister Joe Gibbs Sr. told the Star-Telegram.
SAN ANGELO — The Johnson Street church operates the Harvest House — a place to stay for out-of-towners whose loved ones are hospitalized. The small brick duplex has served countless families, elder Harold Brothers told the San Angelo Standard-Times.
WASHINGTON
OLYMPIA — The Baby Bank, operated by the Olympia church, accepts donations of infant and toddler clothes, strollers, high chairs, bouncy seats and just about any other type of baby gear, except used car seats. For details, call (360) 357-6617.