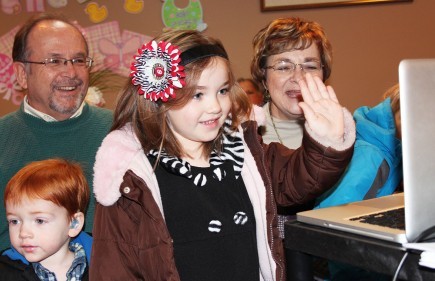 Staff Reports
ALABAMA
ROBERTSDALE — “On This Rock,” a free application for Apple and Android products, aims to share the Gospel via the growing number of mobile devices.
Overseen by the Robertsdale Church of Christ, the app allows anyone with a smartphone to listen to a sermon on demand or hear a web broadcast, said Scott Huffaker, a Robertsdale member who leads the church’s technology ministry.
For more information, see www.on-this-rock.org.

BOULDER — A group working to reestablish the Boulder Church of Christ meets each Sunday at an elementary school, minister David Howard said.
The Boulder church grew to about 800 during the 1980s, in part because of influence from the Boston Movement, Howard said. But the church eventually disbanded and sold its building to eliminate that influence.
“We are meeting with about a dozen former members and are trying to reconnect with other former members,” Howard said. For more information, see www.boulderchurchofchrist.com.
FLORIDA

PLYMOUTH — Philip and Ruth Starling said “I do” in 1938.
Seventy-five years later, their marriage is still going strong.
The Starlings plan to celebrate their milestone anniversary with family and friends Feb. 17 at the Plymouth Church of Christ. Their actual anniversary is Feb. 19.
Philip served as an elder for the Plymouth church for many years and played a leading role in the construction of the church building in the 1950s. Ruth still teaches children’s classes and World Bible School courses.
Read more about the Starlings.
GEORGIA

NORCROSS — People recently shared stories of Americans who have lost serious weight.
The magazine featured Leah Fernandez, director of communications for the Campus Church of Christ, on its cover.
Fernandez is half the woman she used to be — literally — since losing 126 pounds.
Her story of triumph over her weight is coupled with devastating loss. Last May, her husband, T.J., ran a 5K race with her. The next day, he died in a motorcycle accident.
“She has been very faithful and strong during all this,” preaching minister Dusty Rush said of the mother of two young children. “She says his encouragement to finish strong keeps her going.”
Read the full story.
NORTH CAROLINA
FUQUAY-VARINA — Christians are mourning the death of Aaron Craig Allgood, who died in a Jan. 3 wreck blamed on a drunk driver.
Allgood, 24, was a member of the Fuquay-Varina Church of Christ. The victim’s parents, David and Kathy Allgood, attend the same congregation.
David Allgood serves as chairman of the board for Carolina Bible Camp in Mocksville, N.C.
Read the full story.
TEXAS
AUSTIN — Texas Gov. Rick Perry has appointed Jeff Boyd, a member of the Brentwood Oaks Church of Christ, to the state Supreme Court.
Boyd majored in Bible at Abilene Christian University and served as youth and family minister for the
Brentwood Oaks church before attending the Pepperdine University School of Law.
A former Texas deputy attorney general, he worked as Perry’s general counsel and later his chief of staff before the court appointment.
Read the full story.