Staff Reports
ARIZONA
TUCSON — A four-hour drive north to an Apache reservation gave teens from Tucson the opportunity to show Christ’s love in a weekend of sledding and serving others.

Mountain Avenue Church of Christ youth group members worked with other churches in Show Low, Ariz. They packed food boxes for needy families, created a rock path to a church for the rainy and snowy seasons, hosted a Vacation Bible School and took children sledding.

“I am so proud of the teens for their work in reaching out to the kids on the reservation and for actively living out their faith by seeking to serve others,” said Jessica Knapp, who works with the youth at Mountain Avenue. “It was a weekend of hard work, but I think the teens did a great job.” 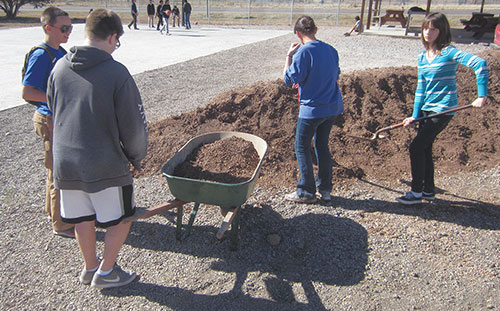 Will Thompson works on the construction project. (PHOTO BY JESSICA KNAPP) NORTH DAKOTA 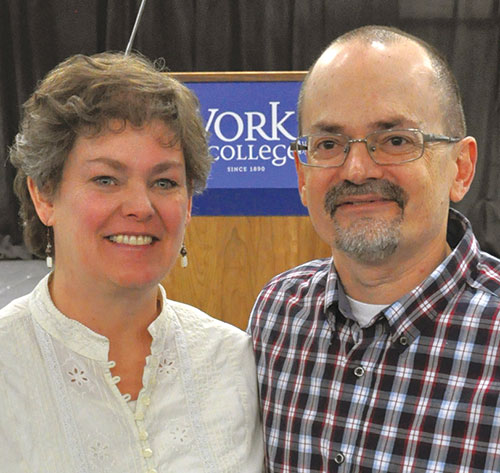 The award, given by York College in Nebraska, recognizes York College graduates who have dedicated themselves to serving small churches in the upper Midwest. Frank Wheeler, chairman of York’s Bible department, presented the honor.

The couple’s sons, Cory and Caleb, and daughter, Caris, also graduated from York.

The Clarks received a check for $1,000. They intend to use it to help pay for travel later this year to South Africa, where Caris and Cory will be working with the organization Orphan’s Justice.
VERMONT
SPRINGFIELD — The Springfield Church of Christ hosted its first “Spring Sing” on May 1.

“Yes, the singing was excellent,” Huntley said.
VIRGINIA
NEWPORT NEWS — For years, the Denbigh Church of Christ has helped with an interfaith homeless program called PORT.

But this year, the congregation decided to step up its involvement and become a host church, associate ministry Roger Brown said.

“For one week, we opened our doors every night to bring in the homeless for a hot meal, shower, warm sleeping accommodations and breakfast the next morning,” Brown said.

Housing assistance, clothing and a variety of other services were offered, too.

“What greater way to celebrate Christ than to serve his children of lesser means?” Brown asked.