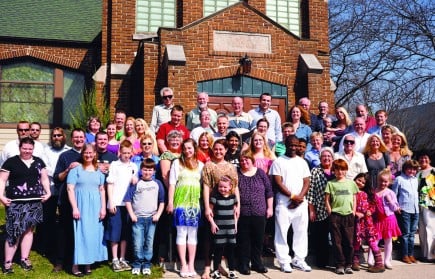 Across the Nation, January 2013

Staff Reports
FLORIDA
ORLANDO — Three teens who attend the Concord Road Church of Christ decided to memorize 100 Bible verses each as part of Lads to Leaders/Leaderettes.
Jacob Sees, Daniel Stetzinger and Alex Windon challenged the congregation to join them.
With the enthusiastic support of the church’s six elders, 116 Concord Road members accepted the challenge.
“The challenge from these three amazing young men will have a far-reaching impact for good,” church member Rhonda Fernandez said.
GEORGIA
CHICKAMAUGA — A longtime elder for the Chickamauga Church of Christ was killed and his wife critically injured in a head-on crash Nov. 6. Allen Kellett, 65, and his wife, Joy,  had been married for 44 years.
“Allen was a wonderful Christian man and an awesome and caring elder in the church,” Brenda West wrote on the The Christian Chronicle’s news blog. “Please pray for his wife Joy and children Wade and Amanda and their families during this extremely difficult time. This is a very loving and caring family.”
Read the full obituary.
LOUISIANA
MONROE — “Discover,” the largest annual youth rally among Churches of Christ in Louisiana, brought nearly 600 teens and adult leaders to northeast Louisiana.
The recent rally featured as keynote speakers Jase Robertson of A&E’s “Duck Dynasty” and ministers Jonathan Storment and Don McLaughlin.
Robertson is a member of the White’s Ferry Road Church of Christ in nearby West Monroe.
The singing group Acappella led worship. Jason Barnard, family minister for the Forsythe Church of Christ in Monroe, the sponsoring congregation, planned the event. For information on Discover 2013, see discoverrally.com.
NORTH CAROLINA
GREENSBORO — “Gray Hair Talking” is a video ministry launched by Rachel Solomon, a member of the Friendly Avenue Church of Christ.
“I am a gray-haired great-grandmother offering a few minutes of encouragement, motivation and inspiration in my videos,” said Solomon, 73, who posted her first video on YouTube in February 2010.
Since then, more than 50 additional videos have followed on her channel at YouTube.com/GrayHairTalking.
“My goal is to glorify God in my senior years and lift up the name of Christ worldwide,” she said.

TEXAS
DALLAS — “Should we be ashamed of the name ‘Church of Christ?’”
“What is our dominating conversation in the Church of Christ?”
Those were among the questions discussed by a panel of young ministers from North Texas during a recent “State of the Church” event, hosted by the Cedar Crest Church of Christ.
“The unique thing about this panel is that the ministers represented are all in their 30s, so this is a new generational conversation,” said Willie B. Williams III, minister for the North Colony Church of Christ in The Colony. The gathering was “a young generation discussing possible solutions that we see in the church today.”
See a video of the discussion.
WISCONSIN
ELKHORN — The Elkhorn Church of Christ had something extra to celebrate at its congregational fellowship meal before Thanksgiving.
The church paid off its mortgage in October. After meeting in homes, a band of 35 members bought a building for $90,000 in 1993 with a loan of $55,000 needed for the purchase.
“The last payment is a milestone of growth for this assembly moving toward its goal of being self-supporting,” elder Jim Frost said.
Sunday attendance often exceeds 60.