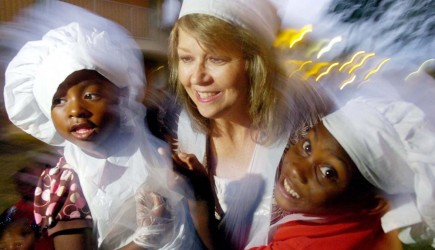 Across the nation, January 2010

From Staff Reports
CONNECTICUT
BRIDGEPORT — The Trumbull church has planted a new congregation in nearby Bridgeport. The 50-person congregation worships at a downtown Holiday Inn.
“As we commit ourselves to the furtherance of God’s kingdom within the city, we solicit your prayers and spiritual acknowledgment concerning this great work in New England,” member Nadine Keller said.

GEORGIA
MONROE — The 2-year-olddaughter of Brian Gray, youth minister at the Monroe church, was killedin a traffic accident on Thanksgiving weekend. Authorities said HelenGray, who would have turned 3 on Dec. 23, was strapped in a car seat.
Her mother, Kristy Gray, suffered serious spinal injuries. Brian Graywas treated for minor injuries. Both he and his wife are graduates ofFaulkner University in Montgomery, Ala. More than 5,000 people joinedthe “Prayers for the Brian Gray Family” group on Facebook.com.

ILLINOIS METROPOLIS — In southernIllinois, God blessed the 120-member Metropolis church with 16 baptismsin the past 10 months, minister Michael Shank said.
“These are adults who, after an in-home Bible study, have expressedtheir desire to become New Testament Christians,” Shank said.

OHIO
CANTON — The two largestChurches of Christ in Canton — the 325-member 38th Street church andthe 165-member Market Avenue church — have merged.
“After much discussion and prayer, it was decided that the Lord’s workcould best be carried out by the uniting of these two finecongregations,” said Earl Ash, evangelism minister of the new NorthwestChurch of Christ.
The merged congregation’s nine elders include five from the 38th Street church and four from Market Avenue.
“Have there been struggles? Yes. Joys? Many,” Ash said. “But through itall we have reminded ourselves and each other that we are a family andthat families love each other and can work as God’s people ineverything.”

PENNSYLVANIA
SOMERSET — At 17, high schoolsenior John Kern has figured out something that takes some men years torealize — he wants to be a preacher.
“I want to make my life learning about the Bible. I’ve always beeninterested in what it said,” Kern, a member of the Somerset church,told the Daily American.
He’s considering Abilene Christian University and Sunset International Bible Institute, both in Texas.
After his studies, he told the newspaper he wants to move back to theNortheast, where he said there is a huge need to teach the practices ofthe Church of Christ.

TEXAS
HOUSTON — Three Houston Texansplayers — Andre Johnson, Dunta Robinson and DeMeco Ryans — partneredwith H-E-B stores to donate 1,000 Thanksgiving dinners at the FifthWard Church of Christ.
“It’s even more special to be able to come back to this church, thiscommunity I come to church at,” said Ryans, a Fifth Ward member whofrequently attends Sunday evening services when the NFL team has anearly game. “To do it here and see faces that I know, familiar faces,and see the smiles that we’re putting on the faces, it’s a real specialfeeling.”

WASHINGTON
LAKEVIEW — Glenn Newton,minister of the Lakeview church, often said hello to the policeofficers he encountered at the Forza Coffee Co. shop in nearbyParkland. That made the Nov. 29 shooting deaths of four officers at thecoffee shop all the more difficult.
“Every Sunday I’d stop in there to get my coffee,” Newton told KOMONews. “The only reason I didn’t stop (the day of the shooting) isbecause we had a guest speaker I had to go pick up at his hotel, and Iwas running a little late.”
In the weeks after the shooting, the Lakeview church shed tears and prayed for the families left behind.