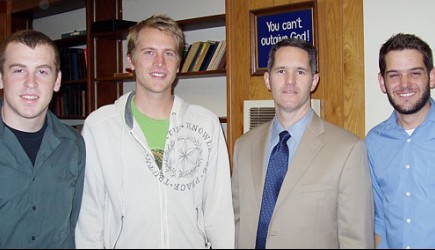 Across the nation: In the movies and the pews

Staff Reports
BURBANK, Calif. — In the heart of the entertainment industry, the Burbank church ministers to young people who move to Hollywood trying to break into the movies.
“This is a world where Christians need the support of a strong church family,” outreach minister Jim Hamilton said.
Families of aspiring actors or directors who relocate to the area are invited to call the church with details so church members can contact them, Hamilton said. For more information, visit the church Web site at www.burbankchurchofchrist.org.
ILLINOIS
SPRINGFIELD — The “Annual Great Giveaway” of the Lakeside church helped 184 families with clothing, household items, furniture and food, minister William V. Clary said.
“We thank the community for allowing us the privilege of serving them and look forward to another wonderful opportunity next year,” Clary wrote in a recent letter to the State Journal-Register.
IOWA
ANKENY — The Ankeny church hosted a recent missional church seminar featuring James Nored, minister of the Liberty, Mo., church.
Nored gave six lessons on the missional concept, outreach to the community and how to connect with younger, postmodern generations.
“I have sat in on a lot of seminars,” elder Bob Messer said. “This is, without a doubt, the most effective one.”
Members are forming small groups to help implement ideas from the seminar.
HAMPTON — As part of an effort by the Memorial Road church in Oklahoma City to see 1,000 members go somewhere to help in a mission effort this year, 10 older Christians recently traveled 600 miles to Hampton for a campaign.
They handed out 2,000 invitations to study the Bible in the town of 4,500, said Lloyd Deal, one of the campaigners.
“Several home studies were conducted, and 65 were enrolled for a series of 12 Bible lessons to be received by mail,” said Deal, a Memorial Road deacon. Jim Zacharias is the preacher at the Sixth Avenue church in Hampton.
KANSAS
CHERRYVALE — The Cherryvale church, a small congregation near the northeastern Oklahoma state line, hopes to attract Christians to move to the area to serve as vocational missionaries.
Members of the church work in medicine and economic development and can help find jobs for Christians interested in this opportunity, said minister Stan Bryan, who is in the cattle business.
“At Cherryvale, we now have no building debt, so basically all our contributions go to missionary activities,” Bryan said.
For more information, e-mail Bryan at [email protected].
KENTUCKY
ADAIRVILLE — Amos Gardner celebrated his 100th birthday this fall by preaching at the Adairville church.
Ed Boggess, minister of the Winchester, Tenn., church, describes Gardner as “a special Christian gentleman.”
“He is loved and respected in the area by all who know him as wonderfully positive, jovial, good-natured and godly,” said Boggess, who first met Gardner when he preached a meeting at Adairville a few years ago.
MICHIGAN
ROCHESTER HILLS — Despite the wind and cold, young people and their families from the Rochester Hills church enjoyed a recent hay ride on a farm.
“This year’s hay ride was a little less adventurous than last year’s, though, since we didn’t get stuck in the mud this time!” wrote Jason Steckel, minister for families with youth. “God did not disappoint us, though, as we did get to glimpse a buck hiding in the woods.”
SOUTH CAROLINA
SPARTANBURG — The recent third annual “School Store” sponsored by the Central church served 564 needy children from 211 families, ministry leader Robert Kimberly said.
The number of children given school supplies and clothing has increased every year, with 200 served the first year and 400 the second, Kimberly said.
TENNESSEE
NASHVILLE — The Charlotte Avenue and West Nashville Heights congregations will consolidate and become the Charlotte Heights Church of Christ. The final services in the Charlotte Avenue building were planned for Nov. 25.
The new church will meet in the West Nashville Heights building until a new place of worship and Bible study can be constructed, said Judith Shockley, historian for the Charlotte Heights church.
The Charlotte Heights church, which had 1,300 names in its directory in 1944, has lost at least 100 members to death in the last nine years, Shockley said. Attendance had dropped to an average of about 115 on Sunday morning.
“Just as the Charlotte Avenue congregation has diminished in numbers, so also has the West Nashville Heights congregation, but it does have young families to help build the congregation for the future,” Shockley said.
TEXAS
ANDREWS — About 240 people from a dozen congregations attended the inaugural West Texas Worship at the Andrews church.
Mack Lyon of the “In Search of the Lord’s Way” television ministry preached.
Organizers hope to make the service an annual event “and build it into a powerful source of inspiration and encouragement for Christians in the churches of western Texas and eastern New Mexico,” said Kevin Bullard, pulpit minister at the Andrews church.
GARLAND — The Saturn Road church recently surpassed 150 local baptisms for the third straight year, minister John Scott said. Also, members pledged $634,000 for discretionary mission works beyond the regular works planned for 2008, Scott said.
MEADOWS PLACE — The Sugar Grove church’s annual “Treat In A Trunk” event served more than 4,000 participants. Free hot dogs and soft drinks were given in exchange for guests registering.
“We will follow up with a mailing telling them more about the church, inviting them back and offering them a free Bible if they come on Sunday morning,” said Tim Shoulders, body life minister.