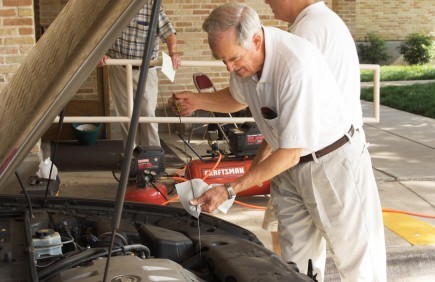 Across the nation, February 2011

FROM STAFF REPORTS
DELAWARE
NEWARK — The Newark Church of Christ is moving forward after the closing of Aletheia Christian School and Child Care, which fell victim to rising costs and declining enrollment, leaders said. The church and the school, which closed in June 2010, shared a building for 36 years.
“We are making a good recovery,” minister Steve Mahoney said. “After numerous yard sales and filled Dumpsters, the church building is pretty much cleaned out.”

KANSAS WICHITA — Friends of Our Troops, a national military pen-pal campaign, recognized the West Douglas Church of Christ for sending more letters of love and encouragement to troops than any other church in Kansas.
Church member Phyllis Sadler coordinates the effort.
“Like a shaft in the ebony darkness, the letters are sent directly to the hearts of our troops,” minister and elder Gordon Rogers wrote in a bulletin article. “They realize there are many who pray for them and wish them God’s blessings.”

NORTH CAROLINA CARY — Forty years ago, five families met for church services in a small building. A year later, the Raleigh-area congregation expanded to a 200-seat meeting place.
Now, the Cary Church of Christ fills a 600-seat auditorium, The Cary News reported. More than 180 families gathered for a recent day-long celebration of the church’s humble beginnings and its anniversary.

NORTH DAKOTA DICKINSON — The Dickinson Church of Christ building was damaged after a burglar broke in and tried to burn evidence of his crime, the Dickinson Press reported.
The fire burned songbooks, Bibles and chairs. Church members planned to meet in preacher Kenneth Anderson’s home next door until repairs could be made.
“We believe the church is the people,” said Patricia Anderson, the minister’s wife. “This is just a building. … You’re not going to burn down the people.”

OKLAHOMA OKLAHOMA CITY — The Northeast Church of Christ and its development subsidiary, Central Urban Development Inc., recently celebrated the construction of a 32-unit single-family affordable housing development. Financing for the development includes public funding.
Central Urban Development’s “ministry is paramount to the fulfillment of the mission of the Northeast congregation,” senior minister Arnelious Crenshaw Jr. said. “That mission is ‘to enhance evangelistic opportunities through community sensitivity and holistic ministry.’
“Our God-given vision is to develop land that will provide salt-and-light ministry opportunities to the people of the community in which we worship and serve.”

YUKON — Is marriage becoming obsolete?
The Associated Press asked that question recently, reporting that one in three American children live with a parent who is divorced, separated or never-married. More people accept the view that weddings bells aren’t needed to have a family, according to a Pew Research Center study.
“Our culture is becoming more and more skeptical of marriage and convinced that cohabitation is a healthy alternative,” said Richard May, former pulpit minister of the South Yukon Church of Christ.
To change that, May said, “God’s people must lead the way.” He and his wife, JeannaLynn, have launched WGHJ (What God Has Joined) Ministries with a focus on coaching couples and improving marriages of leaders in ministry and missionary work. For more information, see www.wghjministries.com.

TENNESSEE MURFREESBORO — Two of the three structures on the East Main Street Church of Christ property received recognition as historic structures by the Association for the Preservation of Tennessee Antiquities.
“The church building was built in 1900 at a cost of $20,000,” church member Sue Weller told The Daily News Journal. “It used to have a bell tower in it. … When they took the bell tower down, they added the stairs.”
The church itself dates back to 1811, Weller said. The first building was constructed in 1833. Lytle Creek served as the church’s baptistery.
James A. Garfield, who later was the 20th president of the United States, preached in the original East Main Street church building in 1863, the newspaper reported.

WHITES CREEK — Christians across the nation prayed for Caleb Brown, a 2-year-old struck by a
basketball-size falling rock at Fall Creek Falls park in Tennessee.
Caleb’s father, Tim Brown, is a graduate of Lipscomb University in Nashville and preaches for the Whites Creek Church of Christ.
Caleb underwent therapy at Scottish Rite Children’s Rehabilitation Hospital in Atlanta before returning home. He is working on recovering his vision and motor skills. The family posts updates on Caleb’s progress at helpcaleb.com.
VIRGINIA RICHMOND — Warmth. Restrooms. Hot cocoa. Cool hospitality. These were some of the amenities that the West Broad Church of Christ provided to spectators during the recent Dominion Christmas Parade, which passed by the church building.
The church welcomed 79 spectators in a two-hour period, according to a note on its website. “We were privileged to enjoy pleasant conversations and bright, appreciative smiles,” the note said. “A parade, people, goodwill and holiday cheer — is that a winning combination or what?”