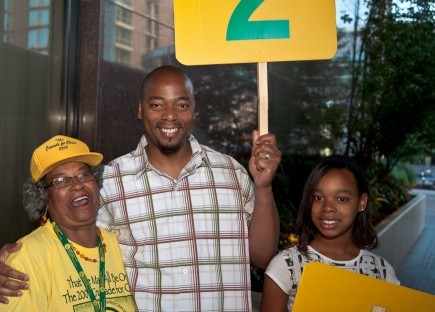 Across the nation, August 2009

Staff Reports
National Crusade for Christ results in more than 100 baptisms
Church members prepare to load buses to go knock doors during the recent National Crusade for Christ in Kansas City, Mo. Pictured above is Jason Brown Sr., a member of the Johnson County church in Shawnee, Kan., with his daughter Jalani and an unidentified member.
About 400 “foot soldiers” participated in the recent crusade, which resulted in more than 100 baptisms, said John Dansby, minister of the Russell Road church in Shreveport, La., and the crusade’s director of staff and finance.
Every two years, the Crusade for Christ — which started in Chicago in 1979 — draws hundreds of volunteers and leads to dozens of baptisms in a different major city. Thousands worship at a nightly gospel meeting.
Daniel Harrison, minister of the Chatham Avalon church in Chicago, serves as the crusade’s national director.
Jack Evans, president of Southwestern Christian College in Terrell, Texas, preached.
ALABAMA DOTHAN — The Westgate church is fighting back against sins such as pornography and infidelity by promoting recovery groups for ministers, men and spouses of those struggling with sexual integrity issues.
Eric Greer, minister of involvement and counseling at the 500-member congregation, is a licensed marriage and family therapist and a trained sexual addiction therapist.
He maintains a Web site at www.intimacymatters.org and hopes that by reaching out in person and online, those struggling can find support and tools to fight their addictions.
ARKANSAS LITTLE ROCK — The McAlmont church celebrated its 50th anniversary recently by remembering its 10 founding members — nine of whom were women.
From its humble beginnings in a storage shed, the women and their volunteer minister, Johnie Lawrence, developed a strong bond as they knocked doors and prayed for their infant church, according to the Arkansas Democrat-Gazette. More than 350 now call McAlmont home, said minister Loyd Clay Harris.
CALIFORNIA LOS ANGELES  — Love a good yard sale? Those who live near the Culver Palms church do.
Church leaders, banking on the community’s bargain-hunting instincts, hosted a parking lot sale recently that served as a huge outreach — and netted $1,300 to replenish a benevolence fund to send needy children to camp.
Residents brought clothes, electronics, household items and children’s toys to sell at reduced rates. Youth group members sold baked goods and lemonade and advertised the upcoming Vacation Bible School, said member Billie Silvey.
“People who hadn’t noticed before now know that there’s a church here,” Silvey said.
GEORGIA ATLANTA  — Fifteen-year-old Matthew Prather was days away from returning to his beloved Zambia to assist in a summer medical missions trip when he was killed in an automobile crash.
Prather’s mother, Jeanette Prather, also died as a result of injuries she suffered in the crash.
To honor the teen, the North Atlanta church has established a memorial fund in his name, as well as another to assist his family with expenses. Information is available at www.nacofc.org.
“We want young people 50 years from now to remember his passion for kids in Africa … and to inspire a new generation of people to serve the way he taught us to serve,” Ken Snell, executive minister at North Atlanta, told the Atlanta Journal-Constitution.
TEXAS ABILENE —  Some churches ask members to silence their cell phones before worship. Leaders at the Southern Hills church are trying a different tact: embracing the smart phone technology.
Minister Phil Ware told the Abilene Reporter-News that he doesn’t think members are tuning out his sermons when they reach for their hand-held devices. “When it gets a little darker, you can look around and see these little glows where people are … looking up Bible passages,” he said.
As a result, Southern Hills is looking at expanding the amount of wireless bandwidth available to worshipers.